Chopper Weddings And After

Some leaders of the community speak out against ostentation and dowry 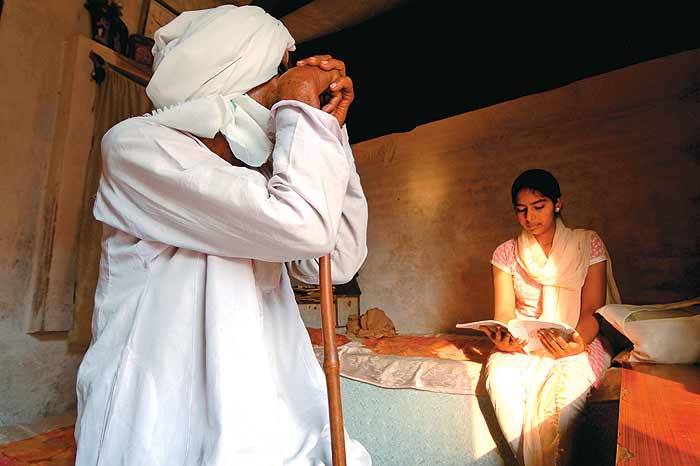 No wedding can escape the mandatory post-mortem in India. So when it came to what is being touted as India’s most expensive wedding—costing Rs 100-250 crore, depending on the version one believes—it’s no surprise that the autopsy has been just as large-scale. And if you’re wondering what wedding, then you clearly haven’t had your dose of masala news channels and trashy supplements this month. They had all gone to town on the March 4 nuptials of Lalit, son of Kanwar Singh Tanwar, the richest candidate to contest the 2009 Lok Sabha elections with a declared net worth of Rs 155 crore, with Yogita, daughter of former Sohna MLA Sukhbir Singh Jaunapuria. Especially because the event was marked by such indulgences as Neha Dhupia’s dance to Sheela ki jawani and, more prominently, the gift of a helicopter in dowry.

For the upwardly mobile Gujjar community, to which the two families belong, such fancy weddings are not a rarity. Ritzy vehicles and farm estates are standard presents at these occasions. A morning walk around the villages in Delhi NCR’s Chhatarpur area will show you long lines of Mercedes, Audis and Porsches parked on the roads for exhibition before traffic forces them back inside high-gated estates. Several have been received by their owners on such festive occasions as a wedding or the birth of a child. Even the much-cited Rs 2.5 lakh for the barber who attended on the Tanwars pales before the Alto and Santro cars that other barbers have received as bakshish in the past.

So what, then, caused such a furore that the Gujjars living in and around Delhi and bordering regions in Uttar Pradesh and Haryana are up in arms, organising panchayats and mahapanchayats to condemn this affair? This week, some community leaders came up with a 10-point advisory for marriages, soon to be put up for approval at a mahapanchayat. The self-regulatory proposals include restricting the number of guests to 100 each from the bride’s and the groom’s sides, no display or use of firearms, liquor, no disc jockeys or dance parties and no cash gifts of more than Rs 101. Those who don’t follow the guidelines, the leaders warn, are likely to face social boycott.

Poorer Gujjars are irritated by the kind of attention the Tanwar wedding has brought to the community.

Clearly, much of the outrage is coming from the community’s less wealthy members, wondering what could possibly outdo a helicopter, and concerned about the exhibitionism of it all. “Others give big gifts too, but quietly. This kind of declaration leads to a race of one-upmanship,” says Satbir, a local cement trader and resident of Jaunapur village, from where Yogita’s family hails. His friends, too, worry that the wedding has misrepresented the financial status of residents of this village, thus dooming those with daughters to marry off to unfair dowry demands.

What’s coming through in their concerns is the differing priorities and world-views of those within this traditionally pastoral and agrarian community who, with their large tracts of land, have zoomed straight to the top of the high-spending heap by cashing in on the soaring prices of farmland, and those taking a more plodding route to gentrification. Money makes its presence felt in their villages at all levels—you can’t help but notice that even the simplest middle-class Gujjar home offers you plastic, pre-packaged glasses of mineral water.

But there are obvious differences of scale. And so, villagers like Satbir worry about the image Gujjars are building for themselves among Delhi’s educated. “Wouldn’t they look down on this ludicrous display of wealth and, perhaps, deny the community greater integration into social and professional life?” they say. Others have useful suggestions to offer, in a somewhat critical spirit. “I would have rather built a school with all that money,” says the mother of young Pinky Tanwar, a young, soon-to-be-married girl.

Interestingly, awareness about the need for education for both the sexes is pleasantly high; indeed many are quick to blame lack of education for the propensity of rich Gujjars like the Tanwars towards crass materialism.

However, not all Gujjars share this view. Satbir’s own daughter, a Std XII student, says, “The Jaunapurias had the money so they gave their daughter a dream wedding. What’s wrong with that?” It’s also quite evident that a disturbingly high number of young men are aspiring for a wedding on this scale for themselves. Babloo, the son of a local kirana shop owner, will settle for nothing less than an item number from Priyanka Chopra and a “racing car”. 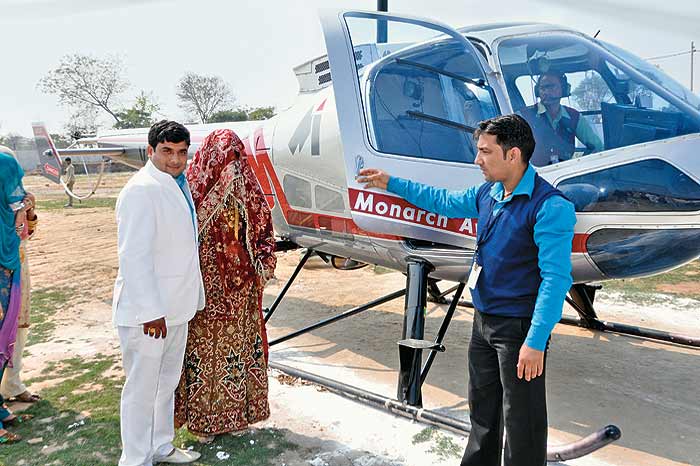 The head-turner at the grand wedding of Lalit Singh Tanwar was the chopper his bride’s family gave the couple.

It’s not an issue that the community has just begun to grapple with. The problem of ostentatious weddings and big dowries began to stare at the Gujjars a decade ago, when Delhi’s borders began to expand to the adjoining farmlands that swiftly began to turn into residential and commercial property. The winds of change caused lifestyle changes, and in 2003, Gujjars belonging to the Bhadana gotra held a mahapanchayat (for all gotras), laying down strong laws and punishments like social excommunication to curtail dowry. While the practice was not banned per se (this was seen as unrealistic), the idea was to impose a sense of restraint. “However, it hasn’t really worked, especially since it is evident with such weddings that a lot of the community leaders themselves have double standards,” says J.P. Tanwar, a one-time associate of Kanwar Singh and now leader of the Anti-Corruption Morcha.

There is also a political subtext here. Gujjars demanding Scheduled Tribe status for their community are concerned that such weddings can only harm their cause. It makes little difference to the rich among them, but it affects those who have middle-class aspirations and dreams of a sarkari job. With agriculture no longer an assured means of livelihood, a small percentage of Gujjar boys—and hearteningly, according to community leaders, a larger percentage of Gujjar girls—are looking for vocations and swelling the ranks in MBA institutes, dentistry colleges and the like. And so it seems that for the Gujjars, the winds of change are blowing in not one but many directions. Some want progress, others flaunt regressive social practices. Naysayers of consumerism find themselves overtaken by the drivers of swanky white cars. Some take pride in matching the strides of Delhi’s flashiest, others lament fading ideals. And so, a new chopper flies in the skies overhead, waiting to be outdone, rumour has it, by a larger 8-seater helicopter at the wedding of another prominent Gujjar a few months down the line.