Choking For Oxygen In Lake Placid 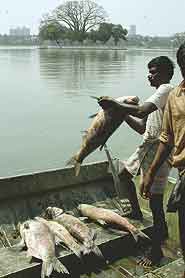 On Republic Day morning, joggers, walkers and residents around Bangalore’s Ulsoor Lake woke up to a cruel reality. They found tonnes of dead fish floating like a sheet on the lake they had romanced for long and had fought for its upkeep.

As the stench from 90 acres of the water body enveloped the air, marine life experts and city corporation authorities rushed to the spot. According to a preliminary finding, they said the oxygen level in the lake water did not match the density of the fish in the lake. "The Biological Oxygen Demand (BOD) level may have gone down due to the approaching summer. Increase in aquatic weeds and algae could have contributed to the situation," the experts explained. They added the fish in the lake had not been harvested for food etc for a long time, although there was a contract in place with the Fisheries Co-operative Society.

Environmentalists, however, disagree. They wonder how the bod level can go down so drastically when the ecosystem in the lake was restored recently and all sewerage inlets had been plugged. The needle of suspicion for the sudden drop in the lake’s oxygen level is pointed towards an adjoining swimming pool. Fishermen and guards protecting the lake say the chemicals and acids used to clean the pool could have been flushed into the lake.

It was only in November 2003 that the city corporation and the University of Agricultural Sciences had released 61,500 fish of four varieties to restore aquatic life in the lake. About Rs 9 crore had been spent for its restoration.

As the samples of the fish and lake water were taken to laboratories for examination, the city mayor presided over the burial of the fish on the tank bed. Truckloads were also taken to other places in the city for disposal. But the stench in this residential-cum- commercial area of the city still hangs really thick. It may take some time before it leaves the nostrils and memories of the people.