Bangalore, India's software garden, is on the blink 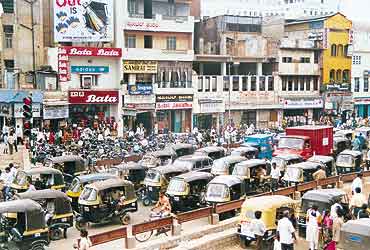 outlookindia.com
-0001-11-30T00:00:00+0553
If one goes by the hype, Bangalore is all that a city should be. It has a history as the Eden among cities, an urban idyll with quiet streets and red-tiled abodes to which you would like to retire. Then came the silicon infusion. Now the favoured sobriquet is ‘funky town’—a hip ’n happening domain that is young, vibrant and teeming with 1,10,000 software pros. But does the reality on the ground match the hype? Ask any Banglorean and he will wring his hands in despair and tell you the city is a living hell.

The home page does not measure up to the portal’s contents. Imprudent planning has brought forth chaos and misery for the denizens of this so-called high-tech city. The urban facilities have been stretched to such an extent that they are crumbling. Road accidents are on the rise. Drains overflow. Public transport is nearly non-existent. Water and power remain erratic. This year, more than 200 cases of dengue, about 1,500 cases of gastroenteritis and high incidence of asthma, malaria and tuberculosis have been recorded.

Old-timers talk of the decay of their city with angst. Says Malaini Deekshit, general manager (HR), Hinduja tmt, who has lived in Bangalore since the ’80s: "I remember passing traffic intersections without either a constable or a signal. Now, traffic piles up even at small junctions. I have to drive for an hour and 45 minutes to reach our office near Electronic City." Agrees Vasu Krishnamurthy, director, Allegro Capital Advisors: "Basically, no town planning has been done, so things are done in a haphazard manner. For a city named the Silicon Valley of India, infrastructure, a basic requirement, is dismal."

Not just the common man, even the top bosses are giving up on Bangalore. Sample this broadside from Azim Premji, chairman of WIPRO: "We have no plans at this point of time to use this (Bangalore) facility for a software development centre. We just think this area is not able to support the traffic and people requirement of such a venture or, for that matter, a BPO. Power problems continue to be prevalent. We are increasingly dependent on generating our own. We have a lot of senior customers who visit us here, and in a meeting that lasts for an hour, you have four power cuts." Adds Kiran Mazumdar Shaw, chairperson and managing director of Biocon: "The manner in which the Karnataka government is addressing the problems of roads, traffic, power, garbage disposal and other basic infrastructure is disheartening. Are we prepared to see 1,00,000 minds stuck behind steering wheels at interminable traffic jams or do we want them to steer us to an economically exciting future?"

A task force has now been set up, headed by chief secretary B.S. Patil, to monitor the infrastructure needs. "There’s a crunch because the city and its seven municipalities have grown beyond our expectations. We are working to ensure that there’s a proper development plan," he says. Chief minister S.M. Krishna, however, feels the critics are going overboard. He told Outlook: "I do not accept that things are going from bad to worse because there is a visible improvement in the quality of life of the average Bangalorean. There’s poverty in any European city or in any city in the United States and so there are slums here too, but that should not be magnified."

Officials admit that the Bangalore City Corporation’s Rs 1,024-crore annual budget is inadequate. It has not generated enough resources from property tax, licence fee, rentals or lease of buildings. "The authorities have denied the citizens an opportunity to participate in the city’s development. Only such involvement will enhance their confidence in the local authorities," says Ramesh Ramanathan of Janaagraha, an NGO involved with improving the city’s life.

The state government seems to have taken the cue. It has assigned the task of catalysing change to the citizen’s forum, Bangalore Agenda Task Force. BATF is working with seven government agencies to improve amenities. Instead of adding one more to the pile of reports on Bangalore, it has taken the route of accountability. At summits held once in six months, it reviews what has been done and sets targets for the next six months. "The system is under stress, there is pressure on the infrastructure because of the population boom. But we also lack a responsible citizenry. The way forward will be integrated planning by various organisations that also fix deadlines for completion of every project," says V. Ravichandran, spokesman of BATF.

Only the success of such moves can give Bangalore some breathing space. Ironically, the same can be said for chief minister Krishna. With elections due next year, the pressure is on him to act. If he expects any support from the IT czars, he will have to quickly widen the city’s bandwidth.