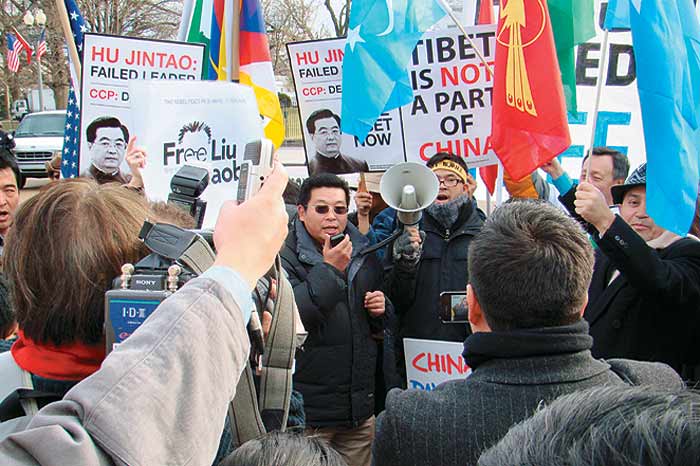 When Chinese President Hu Jintao at last week’s press conference in the White House admitted that “a lot still needs to be done in China in terms of human rights”, Yang Jianli was laying threadbare before a gaggle of American lawmakers Beijing’s abysmal human rights record. Yang reeled out chilling facts—China is the only country to imprison a Nobel peace prize winner, has the most prisoners of conscience in the world, and hosts hundreds of unregistered prisons where people suspected of “affecting society’s stability” are made to “disappear”.

Yang himself has been a victim of China’s imperious disdain for human rights. He participated in the 1989 Tiananmen Square protest, left his country to live in the United States, and was subsequently deprived of Chinese citizenship as his passport wasn’t renewed. An indomitable Yang, trying to keep the flame of freedom flickering, was nabbed as he attempted to enter China in ’02 on a friend’s passport. He was kept in solitary confinement for 15 months of his five-year imprisonment term, and regularly subjected to gruesome physical and psychological torture. The trauma didn’t turn him quiescent; in fact, he’s counted among the impassioned Chinese dissidents abroad who are waging a protracted battle for democracy in Beijing.

“Do Americans care when organs are removed from Chinese prisoners? No. They go to China for transplants.”
Harry Wu Laogai, Research Foundation

It’s to Yang, who now heads the Boston-based Initiatives for China, that Nobel peace laureate Liu Xiaobo’s wife Liu Xia turned to for preparing the guest list for the award ceremony in Oslo. Construing the Nobel as brazen interference in its internal affairs, Beijing disallowed Liu from visiting Oslo, and placed his wife and their dissident friend, Yu Jie, under house arrest. Since then, Yang hasn’t heard from Liu Xia, and worries constantly about the fate of his friends.

Hu’s admission notwithstanding, stories of China’s repressive measures against dissidents continue to surface, making many nervous about a country that’s expected to assume greater global responsibilities as it acquires greater economic and military heft. Take the case of Gao Zhisheng, a human rights lawyer who was detained in February ’09, and released for a few weeks early last year. During his brief spell of freedom, he narrated to the Associated Press the torture he was subjected to—stripped naked, three police officers pummelled him with handguns in holsters, taking turns to beat him for two days and nights and putting him through torture he refused to describe. When they were tired, they bound his arms and legs with plastic bags and threw him to the floor until they caught their breath to resume the abuse. Gao had asked the AP not to publicise his account unless he went missing again or made it to “someplace safe”. Two weeks later, last April, he vanished.

In their phone conversations in April, Gao never told his wife, Geng He, about the treatment meted to him. “He was afraid that I’d worry,” Geng told Outlook. It wasn’t the first time Gao had been tortured. In ’07, after he sent a letter to the US Congress denouncing human rights abuses in China, he was detained for almost two months. “His captors electrocuted him. They burned his eyes with cigarettes. They stuck toothpicks in his genitals,” says Geng, who came to the US with her children in ’09 and has now made it her mission to raise awareness about the plight of Chinese like her husband’s. She believes the detention of Gao is linked to her decision to flee China. “Had he come with us, we would have never made it out of China,” she says.

“In ’07, he was detained and tortured. His captors electrocuted him and even burnt his eyes with cigarettes.”
Geng He, Wife of Gao Zhisheng

Perilous remains the life of those who incur the state’s ire. Mongolian activist Hada, who was sentenced to 15 years in prison in ’95, was reported to have been released in December. But there’s still no trace of him, his wife or son. Similarly, Li Hong, a prominent writer, died in custody late last year after being tortured. Worse, labour camps still abound in China, the conditions there inhuman.

Says Harry Wu, executive director of the Laogai Research Foundation, Washington, “If you add the number of people in the Soviet gulags and in concentration camps during the Holocaust, it will still be less than the number of Chinese in these labour camps.” Harry was sent to labour camp in ’65, on the suspicion of organising dissent. He remained there and suffered, for 19 long years. His arm was broken after he had been found with a copy of Victor Hugo’s Les Miserables. “If you didn’t work they wouldn’t feed you,” recalls Wu, who worked 12-hour shifts daily in a coal mine and was once denied food for 11 days.

Sophie Richardson, Asia advocacy director at Human Rights Watch (HRW), says enforced disappearances are among the most serious abuses the group documents “partly because...the state that is supposed to be protecting you is in fact disappearing you”. Disappearances are merely a euphemism for further abuses, such as torture and death in custody, she adds.

Strident criticism of China’s violation of human rights prompted Beijing to announce in ’09 its National Human Rights Action Plan (NHRAP) that sought to promote and protect human rights for a two-year period. In its January report, though, the HRW said the reverse was in fact happening—the Chinese government was curbing freedom and tightening restrictions. In addition, there was an increase in the number of enforced disappearances and arbitrary detentions in secret unlawful facilities known as ‘black jails’. Spokesman for the Chinese embassy in Washington, Wang Baodong, however, says the HRW has long taken a “biased attitude of bigotry toward China”.

Harry blames the West for Beijing’s brazen flouting of human rights. As he says, “When organs are removed from prisoners in China, do Americans care? No. They go to China for organ transplants. You want to engage with China in business, fine, but you have to talk about human rights as well.” In his meetings with Hu, Obama did raise the issue of human rights. But rights groups say the situation in China will not improve unless the international community takes a united stand. Richardson is right when she says, “The Chinese government listens closely to what governments don’t say.” They don’t, for instance, talk about making Beijing suffer economically for its violations of human rights.