They say it's part of Tibet; India cites geographical contiguity 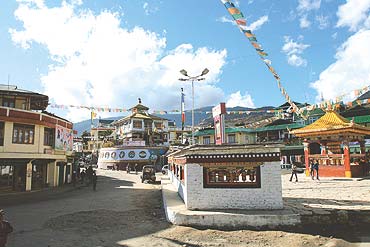 outlookindia.com
-0001-11-30T00:00:00+0553
Last year, when Chinese premier Wen Jiabao visited India, Prime Minister Manmohan Singh told him that New Delhi had the "political will" to make adjustments to arrive at a boundary solution. Wen responded that Beijing too possessed the will. Theoretically, the way ahead seemed clear-cut: a political framework was to be developed by the two special representatives to enable both sides to make adjustments necessary to solve the boundary issue. The special representatives were expected to narrow down the differences as much as possible, potentially the most sensitive part of the exercise.

Among the adjustments China wants India to make is to give up Tawang in Arunachal Pradesh, to which entire region it lays claim to. In return, the Chinese hint at generous adjustments in the western sector. Exactly how generous hasn’t been made clear. But China says Tawang properly belongs in the Tibet Autonomous Region. They say this was where the sixth Dalai Lama was born and it is an important place of pilgrimage. In security terms, Tawang would give it access to Bhutan, and also bring it closer to Bangladesh.

The Indian government has so far ruled out the possibility of making a fairly large adjustment but maintains that minor adjustments are possible. By and large the present positions should remain, they maintain. Since the guiding principles, agreed upon during Wen’s visit last year, take into account settled populations and geographical contiguity, this should work in India’s favour, sources say.

The inability to arrive at a quick boundary solution that is mutually acceptable eats relentlessly into the Indian strategic psyche, even though privately, negotiators point out that it has been a long time since a bullet has been fired "in anger" along the border areas with China. The areas are by and large peaceful, stable, even tranquil. Yet, the Chinese appear to be in no hurry to hasten the process. In such an atmosphere, even the Chinese ambassador stating the long-held Chinese position over Arunachal Pradesh works up a frenzy.

If one draws a map based on the actual ground position, the India map schoolchildren are familiar with would look radically different in comparison. Some of the areas captured by Pakistan have since been ceded to China. Arriving at a package deal that takes a comprehensive view of the ground reality and reconciling the two competing claims will require a huge political will on the part of India, a process made trickier because of competitive coalition politics and the apparent need to play to the gallery. This was what inspired a parliamentary resolution after the 1962 Sino-India war vowing to recover every inch of Indian territory with the Chinese. How it was to be achieved remains in the realm of hope.