Chinese ambassador to India talks on Indo-Chinese ties, and, of course, on his recent remarks regarding Arunachal Pradesh... 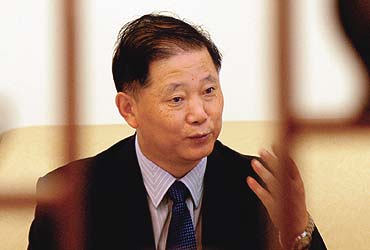 What will President Hu Jintao's visit be remembered for?

The visit will be remembered as a landmark in developing good relationship between China and India. We are pledged to be cooperative partners and I think in our preparation work we are trying hard to add substance to this partnership—in the political area, economic cooperation, cultural exchanges and even in confidence building measures in the defence area.

Could you be more specific?

Well, let's leave it to the visit, when the two leaders will discuss how to further promote out relationship in all these areas.

What are the Chinese priorities in the relationship with India?

We see India is a very important neighbour of ours. India is a big country, a big power in the world, and we are the most populous nations in the world. Put China and India together —2.4 billion—that's more than one third of the world. And co-operation is very important as promoting each other's development will enable our people to lead a better life—it would benefit more than one third of the world's population. Also, China is following a foreign policy that attaches great importance to neighbouring as well as developing countries. India is both a neighbouring and a developing country, so the importance of our relationship can never be over-emphasised.

What are the priorities in the relationship in terms of tasks and objectives?

First, politically, we need to have more co-ordination and co-operation in handling international and regional affairs. We are both responsible members of the international community. And we are the two largest developing countries, both developing fast. We should co-ordinate our efforts in boosting our development. In the past, we jointly advocated Panchsheel- the five principles of peaceful co-existence. Now, China is proposing to build a harmonious world. I think India and China can jointly contribute to that. Because we both have long traditions of Asian civilisation and this world is far from harmonious. But we should make combined efforts in achieving harmony among nations, harmony among people, harmony between people and nature. We can work for all this and other things like environmental protection etc.

There seems to be a certain anxiety about China, a recent instance is the reluctance to give projects to Chinese companies in certain sectors considered security-sensitive. Does China feel discriminated against?

Well, China-India economic relationship is developing fast. Now, India already has become the largest market for Chinese companies, especially in infrastructure. Chinese companies have the largest volume of contracts in road paving, power stations, gas pipelines, telecommunications. Chinese companies are already very active here. But you know, during (economic) development, sometimes problems occur and we need to overcome them quietly. Recently, I was very happy to hear his excellency the new foreign minister's remark that Indian policy is not to discriminate against any Chinese compainy. So we hope the problems will be solved in due time.

Could the announcement have been made quicker?

Well, he did make the announcement. I appreciate that.

Your remarks on Arunachal Pradesh have sparked off a heated debate in India even though what you said has been China’s position since 1959. How do you view the controversy?

That day we (CNN-IBN and he) were talking about history. The boundary question is an issue left over from history. Our position is clearly laid down in the document (Guiding Principles to resolve the border problem) we signed last year. Our position is that this issue must be solved through friendly consultations. We must mutually accommodate each other’s positions. That’s why I say: we are ready to make compromises. That’s why we have these boundary negotiations.

What kind of claims do you have to back up your position on Arunachal Pradesh?

A large disputed area is involved. We have to leave the details for the political representatives to negotiate. If you want to know the specific areas, you can tell from the maps.

Article VII of the guiding principles say that consideration will be given in terms of the settled populations of the areas under discussion. How would that apply to Tawang.

I think that's for the political representatives to negotiate. I am not in a position to comment on that specifically.

Does China have a political view on the Indian Parliament resolution after 1962 that India will recover all territory ceded to China?

No, that’s your decision and the document is of your Parliament. We have ours. We have our constitution and also our National People’s Congress. And that shows the different position of the two countries. That’s why we need negotiations. That’s why there are disputed areas

What kind of adjustments might have to be made ultimately, in a package or in parts when we come to the framework agreement?

Now, our two political representatives are working out a framework. Before that's worked out, its too early to specify any area that might need compromise.

Does China think India’s nuclear deal with the US can upset the regional balance?

That deal was signed bilaterally between India and the US. I am watching closely, but that’s a bilateral deal.

So, in the Chinese view, the deal has no repercussions at all?

We would like to see any two countries develop bilateral relations, to have good relations with each other. But the development of any bilateral relation should not be targeted against a third party. I think India and the US are trying to have a peaceful and politically stable environment. We also have the same objective. We can cooperate on that. Anything that endangers regional peace and stability, we should make an effort to remove that.

Does China have any reservations in the visa policy that India has been following with respect to Chinese businessmen and contract labourers?

Actually I have heard some complaints from our companies but I also notice that recently relevant Indian authorities are making effort to simplify the visa procedures. I am happy to see that. I hope the time taken to issue visas and also the approving process can be improved further.

When is the invitation coming for India to join the Shanghai Cooperation Organisation?

India is already an observer there. To become a full member, a consensus of the present members is needed. It’s up to the countries to agree. That will take some time. Now China is already accepted as an observer of SAARC. We are also applying for membership to SAARC. It is up to the SAARC members to decide.

Is there is a sense in China if India is being drawn into some kind of game of containment with the engagement with the United States— the patrolling on the Malacca Strait, for instance.

Excerpts from this full interview appeared in print