A full-throated championing of India ignores troubling questions, and clings on to the coat-tails of prosperity 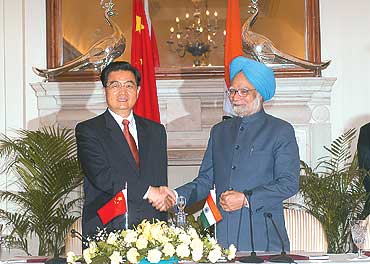 Billions of Entrepreneurs: How China and India Are Reshaping Their Futures and Yours
By Tarun Khanna
Penguin/ Viking Pages: 368; Rs 595
Which lazy Orientalist coined that moronic term Chindia (for China and India)? Did you hear of Brifra (Britain-France) in the 19th century? Have you ever eaten an oraple? Apples are apples, oranges are oranges. You can make a fruit salad out of apples and oranges, but India and China cannot be so chopped up and served.

But the Chindia industry prospers, fuelled by the lazy and the greedy. Lazy ones are those who don’t delve deep into either country. Greedy are the ones who want to sell a book when there’s so much global attention focused on these two Asian neighbours.

If there is any reason for me to welcome the "Chindia" coupling of these two continental, civilisational entities, it is because in the western mind India gets de-hyphenated from Pakistan and gets hyphenated with China. As any social climber will tell you, your status improves when you get coupled with the upwardly mobile. We are the wannabes of this decade. We may yet arrive, but we aren’t there yet, where China already is.

Meanwhile, there’s a publishing industry feeding this feelgood frenzy. So a Tarun Khanna may actually write a book for an American audience (just look at the title—‘we’ are "their" and ‘they’ are "your"!), but it is in the Indian media that everyone is going gaga, because of his feelgood message.

But Khanna’s message about Indian enterprise being smarter than Chinese, first elaborated in a highly acclaimed paper on industrialisation in China and India that Khanna co-authored, needs more substantiation than we get here in this book. Anecdotes and travelogues are the journalist’s fare. A Harvard scholar must offer more.

Khanna makes interesting remarks in passing about doing business in the two countries. For example, he draws attention to GE’s success in both countries, compared to other multinationals that have succeeded in one but failed in the other. So what lessons are other companies to learn from that? Why is India better at software and services, and China at hardware and manufacturing? Apart from the nature of government, what else makes China do better?

Incidentally, the Chinese have been better learners and performers for a long time. Khanna quotes from Nehru’s The Discovery of India to say that the Chinese have learnt and benefited from both the ‘West’ and the ‘East’, without being swept off their feet. Nehru’s observation that "China took much from India but she was always strong and self-confident to take it in her own way and fit it somewhere in her own texture of life" rings true even today. It is a view echoed in the popular quip that China is a closed society with an open mind and India an open society with a closed mind.

So why are the Chinese more willing to learn from others, absorb the best ideas and prosper, while India remains insular in so many non-functional ways? Khanna does not explore that question. If his optimism about Indian enterprise has to outlast the current Chindia honeymoon, we need an answer to that one.

Half a century ago the French journalist Tibor Mende travelled around India and China and doubted India’s ability to succeed, while concluding that "China may even emerge as the new, third, and major power center of the world" (China and Her Shadow, Thames and Hudson, 1960). No one then viewed India as a potential world power, and few do so even today.

India has, of course, not only survived as a nation but has done reasonably well, and is now doing better. But are we in the same league as China? Not yet. Do Khanna’s "billions of entrepreneurs" exist? What are they doing to help power India? Will the politicians allow the entrepreneurs to deliver? Khanna’s book offers no answers, only the hope that answers exist.

The most reassuring part of Khanna’s book is his demonstration that India’s openness and transparency enable investors, analysts and strategists to arrive at informed forecasts. India is unlikely to throw up any surprises. Predictability has its virtues. China remains a land of conundrums and conjectures. But that has not come in the way of western investors betting on it. Even today, despite Khanna’s non-resident optimism about India, the bets are still on China.