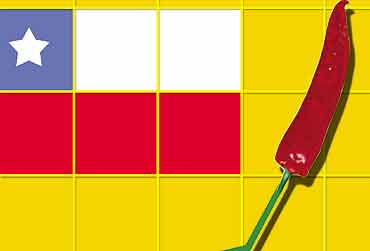 outlookindia.com
-0001-11-30T00:00:00+05:53
For many Indians travelling abroad, the old stomping grounds (London, Miami, New York) are getting a bit stale. New places to visit are at a premium. Yet I keep hearing in Delhi, "I have been all over the world, except for Latin America." And on Chile, "Ah, good wines. Allende. And Pinochet; by the way, what is the latest on the general?"

There is little doubt that both President Salvador Allende (1970-1973) and General Augusto Pinochet (1973-1990) left deep imprints. Last September, we commemorated the 13th anniversary of the tragic 1973 military coup, and President Ricardo Lagos at a moving ceremony at La Moneda—Chile’s Presidential Palace—reopened one of its doors: Morandé 80, the traditional, non-ceremonial access to the presidential quarters, a door that was eliminated in the restorations after the 1973 bombing of La Moneda. The opening of that door, so new, but at the same time so old, in a way closed a period in our history and opened another.

Yet, long before that day, Chile had been moving beyond its divisive past. After the 1990 return of democracy, a Truth and Reconciliation Commission had thoroughly investigated the human rights violations that took place from 1973 to 1990, and reparations were provided to the relatives of the more than 3,000 fatal victims. Today, a similar report is being prepared on the surviving victims of torture and other prison abuses, to provide similar symbolic and material compensation.

Politically, three democratic governments in a row of the Centre-Left Concertación de Partidos por la Democracia have provided Chile with remarkable political stability, and the economy has flourished, something especially relevant now that a Preferential Trade Agreement with India is in the offing. Why should India be interested in an agreement with what is often described as "a small country at the end of the world"?

Let us start with one figure: $30 billion, the projected total of exports of Chile for 2004, half of what India exports. Chile may be a small country (pop. 15 million), but we are big traders. And the story behind that figure is fascinating.

Chile has a highly educated labour force, where the literacy rate, like Kerala’s, is 95 per cent. We have fertile agricultural land and a rich variety of natural resources. Yet, many countries have that. Well, Chile has been doing well mainly because of a certain approach to economic development, mainly export-led, and innovative public policies.

For long, Chile was wedded to inward-oriented development and import-substitution-industrialisation (ISI). Yet, given the small internal market and heavy dependence on copper (up to 75 per cent of export earnings in the mid-’70s), the switch was made to an open economy.

A big effort was undertaken in agriculture, and Chile today is the biggest fresh fruit exporter in the southern hemisphere. This takes advantage of the privileged soil and climate of the Central Valley, the reverse season in the northern hemisphere and the increase in demand for fresh fruit that took place in the ’80s and ’90s.

Yet, in an export-driven model, growing at 7 per cent a year requires exports to grow at 9 or 10 per cent. In turn, that means diversifying export markets. To boost trade, Chile has signed ftas with 38 countries (more than any other, save Mexico), including the United States, the European Union and Canada.

Some of the reasons for this high and steady growth are related to sound macroeconomic fundamentals—low inflation, low public debt, and regular fiscal surpluses; and also to innovative public policies. For instance, faced with a huge public infrastructure deficit in 1990, it devised a public concessions programme, whereby $6 billion in private capital has been invested in its highways, airports and ports. Again, imaginative legislation has created one of the highest teledensities in Latin America, with 30 fixed lines per 100 people and 40 mobile ones per 100. One in every 10 Chileans uses the Internet; one in every five households has access to it.

In the ’90s, when many developing economies reeled under the effect of billions of dollars that came in one day and left the next, Chile’s encaje, a system of foreign capital control that effectively taxed foreign short-term capital, avoided such fluctuations. For long firmly committed to running a fiscal surplus, the policy now is of a "structural fiscal surplus". This allows for countercyclical policies, increasing public spending when the economy slows down, and saving at least 1 per cent of GDP when it speeds up—as is happening this year. Public policies also had an institutional dimension: an independent central bank, and well-established regulatory bodies that set the rules in almost all sectors of the economy.

None of this means that Chile is trouble-free. Income distribution is still very unequal (the Gini coefficient is .58, only slightly better than Brazil and South Africa). But the bottomline is, Chile is doing well, and one of the reasons we are so keen to increase our trade with India is because we are a country looking forward to a better future.

(Dr Jorge Heine is the ambassador of Chile to India.)