Children Of An Equal God 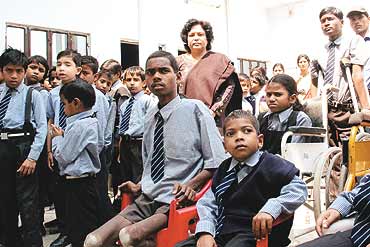 outlookindia.com
-0001-11-30T00:00:00+0553
Ten years ago when Drishti’s founder chairperson, Neeta Bahadur, spotted little Arun near his home in Koela village on the outskirts of Lucknow, he was virtually living the life of a vagabond—forsaken by parents and shunned by villagers as ‘insane’. But for Neeta, it was a challenge to rehabilitate this 9-year-old.

Arun, now 19, is a transformed young man. He may still be an introvert but lives a productive life—he is an assistant to his carpenter father and earns Rs 100 a day. Recalls Neeta: "After days of total inertia, one day when I gave him a paper, and pencil, Arun drew out a flower. That was the turning point. We tapped the budding artist in him, he created other wonders with paint and brush—three years later when we decided to produce our own greetings cards, Arun’s drawings and paintings were a big draw."

Pawan Gaur is yet another success story from Drishti, a Lucknow-based NGO started in 1990. Orphaned while in the eighth standard, Drishti provided him assistance to complete his studies. He completed his graduation and is now employed with the State Bank of India.

Today Drishti can boast of having nurtured several such souls. Devoted to helping the needy with special focus on the rehabilitation of both physically and mentally challenged children, it has helped 1,000 boys and girls start a new life.

Drishti has always maintained a low profile. From leased out premises in a government school for the blind on Lucknow’s outskirts, it has moved to its own building. Today, it’s not just an institution—it’s a vocational centre, a home and family to 300 children ranging from 5 to 19 years. Points out Neeta: "I have personally taken rounds of neighbouring villages to identify physically and mentally challenged kids." And once she succeeds in persuading parents, everything else is taken care of—uniform, books and even a meal.

Drishti does not charge fees. "When we began with just blind children, we were depending solely on voluntary donations. But today we also receive funding from the central government," says Neeta. Villagers, initially reluctant to send their children, now take pride and are envied by others who wish to follow suit. Two years ago, Drishti was entrusted with the responsibility of setting up UP’s first hostel for the disabled under the National Trust set up by the Union ministry of social justice and is going about its mission undaunted.