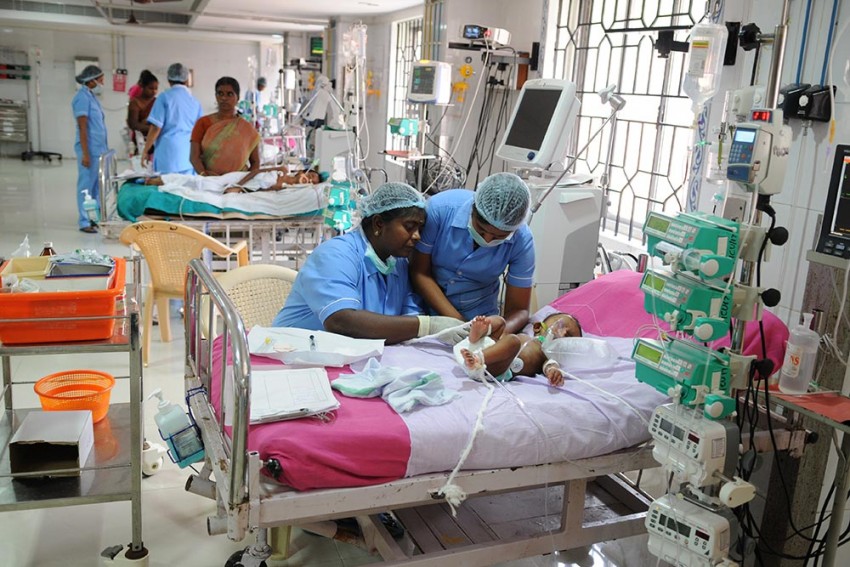 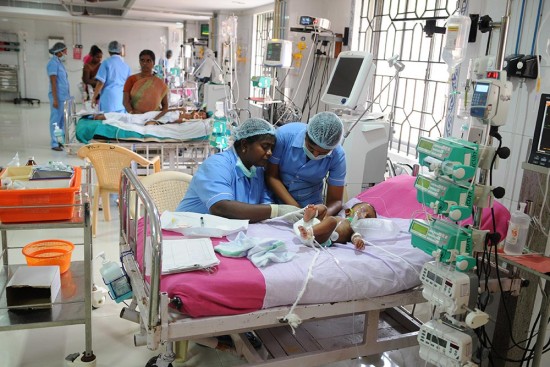 Three-year-old Manivannan (not his real name) swallowed a handful of iron tablets that his grandmother had left unattended. As iron toxicity coursed through his veins, his family rushed him to Thanjavur Medical College Hospital, 24 km from his home in Orathnaadu. The doctors met with limited success, so an ambulance sped him off to the best destination for childcare in the state, the Institute of Child Health (ICH) in Chennai.

Slowly, Manivannan’s breathing and pulse improved. He was shifted from the emergency room to a stepped-down facility where he could lie on his mother’s lap, who helped him breathe from an oxygen mask. “We let mothers handle children unless they are seriously ill. Children feel secure with their mothers and that helps recovery,” says Dr Indumathy Santhanam, emergency care expert at ICH. Manivannan will be under obs­ervation for 48 hours. Already, he wants to play with the toys strewn about the colourful ward.

Elsewhere in the hospital, ICH director Dr A.T. Arasar Seervalar, a senior paediatrician, pores over eight-month-old Marikannu’s test results. The bright-eyed, emaciated baby girl from Pudukottai district has two holes in her heart. He assures the little one’s mother, a woodcutter’s wife, the problem can be set right with surgery at the hospital.

“We will improve her nutritional intake and conduct tests in preparation for surgery. She may have to be here for a week,” he says. Of course, everything is free of cost. This is why the hospital is much in demand, for cardiac care, neurology, nephrology, pulmonology and gastroenterology—name the specialisation and it seems to exist at ICH. “Sometimes we draft experts from private hospitals to treat complicated cases,” Seervalar says.

ICH started out as an extension of the paediatrics department of the Madras Medical College. It is recognised as the best government-run hospital for children in the South. Some 3,000 outpatients stream in daily to the hospital, from Andhra Pradesh and Karnataka as well. It has 837 beds, 64 paediatricians, 54 postgraduate students and even a 30-bed children’s ward (unoccupied presently) on standby to handle outbreaks. “After a recent food poisoning in a nearby village, we admitted 26 children with diarrhoea and vomiting,” he says. Since dedicated wards offer quicker treatment and recovery, the children could be sent home the very next day. “This ward is isolated from others, so chances of infection are remote,” ICH health educator S. Gangadharan says.

The Japan International Cooperation Agency (JICA) built an outpatient complex with a modern ER in 2015 at ICH, at a cost of Rs 88 crore. “We had taken a loan of Rs 40 crore in 1998 and effectively utilised it, hence we got the second loan,” says state health secretary J. Radhakrishnan, adding that JICA has also sanctioned a low-interest loan of Rs 1,500 crore for urban healthcare in 17 Tamil Nadu cities.

In Tamil Nadu, newborn care acquired urgency after 13 infants died in the Dharmapuri government hospital in November 2014. The underlying cause of deaths was poorly developed lungs as the mothers were malnourished—preterm and underweight babies always tether on the brink of life and death. The government then set up neonatal wards with life-support equipment in every district hospital and ensured a paediatrician and nurses trained in neonatal care were available.

“Nurses, if specifically trained in neonatal care, can improve child survival chances even when a paediatrician is not on hand,” says Dr Seervalar. The crux of this approach is that patients are treated as close to home as possible. “Coming to ICH on referral should only be a last resort,” says Seervalar.

Make no mistake: This hospital is the holy grail of healthcare, but the chain of command runs from the ground up. Similar plans have been drawn up by many states, though they haven’t gone this far. Even Uttar Pradesh, where failure in oxygen supplies trained the spotlight on poor health services in Gorakhpur and other towns last year, wants to do what Tamil Nadu has done with ICH. But the proof of the pudding is in the eating. Of all states, Tamil Nadu has provided for healthcare starting where they are needed most—in villages.

This goes hand-in-hand with long-term plans to improve pregnant and nursing women’s nutrition, including a mother’s milk bank. “The bank also gives milk to other hospitals free of cost after our requirements are met,” says Dr Kamalakannan, who supervises the neonatal ICU at ICH.

Tamil Nadu has more paediatricians than anywhere in the country: 800 in government hospitals and thrice as many in private practice. It’s no surprise the infant mortality rate is at an all-time low: 17 per 1,000 live births (India: 34, SRS 2016). The remaining challenge: To better support the 27 per cent children under five who are stunted, and 23 per cent who are still underweight.