Too young to wed, these child brides are old enough—and brave enough—for divorce 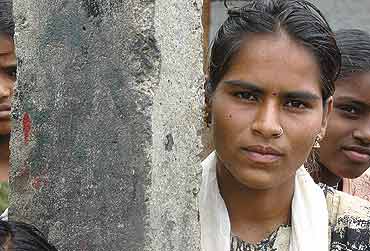 outlookindia.com
-0001-11-30T00:00:00+0553
In the end, it was just a simple, short ceremony. But for Susheela, it was the beginning of a new life. This 15-year-old girl from Alur village in Andhra Pradesh's Rangareddy district set an example to thousands like her when she took off her mangalsutra and returned it to the man she had been married to at age 13. Susheela is not eligible for a formal divorce, for the simple reason that she is a minor and her marriage cannot be recognised by law. So, it was the village panchayat that witnessed the ceremony involving the return of the mangalsutra and other gifts exchanged between the two families during the wedding, formalising the annulment of a marriage she wanted out of.

Child marriages are not uncommon in these parts of Andhra Pradesh. Nor are battered child wives. For all these girls deprived of a childhood, Susheela's rebellion could be a milestone. Her agricultural labourer parents had pulled her out of school after Class 7 and, ignoring her protests, married her off to a 20-year-old from a neighbouring village. Constantly harassed for more dowry, she was also made to work as a farm labourer by her husband and in-laws who ignored her pleas to be allowed to go back to school. 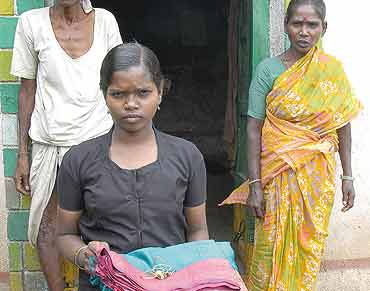 Susheela age 15
Her agricultural labourer parents married her off after Class 7 to a 20-year-old from a neighbouring village. Harassed for dowry and made to work as a farm labourer when she wanted to continue school, she ran away to her parents’. Despite everyone persuading her to return, she announced her intention to annul her marriage. Since it was a marriage the law did not recognise because she was a minor, the village panchayat witnessed the ceremony involving the return of the mangalsutra and other gifts exchanged during the wedding (here seen holding them). Now, Susheela is busy educating herself at a school.

A year in this marital prison, and unable to bear the trauma any more, Susheela ran away and came back home. Her parents and the rest of the villagers tried to pressure her to return to her husband's home. "They all said this is not the way to behave," she says. "But I wanted to ensure he or his family could never harass me again." She announced she wanted a formal annulment of her marriage and go back to school.

"Susheela's case has special significance because by insisting on a formal annulment of her marriage, she highlighted the legal loopholes and inadequacies of the law," says Shantha Sinha, a Magsaysay awardee and child rights activist whose NGO MV Foundation runs a bridge school-cum-camp at Alur and has helped rehabilitate girls like Susheela. They have helped some 14,000 girls who came out of such child marriages in the past five years alone.

Fourteen-year-old Maina is also one among them. Last summer, this Lambadi tribal girl from Basheerabad was married off to a 40-year-old man. "I cried and pleaded with my mother," she says, "but she just bundled me into an autorickshaw, took me to the man's house and got me married to him." The man then locked up his unwilling bride. She managed to escape after two days and get to a friend's home.

However, her "husband" showed up a few days later and tried to drag her back home. Mercifully, they had a massive altercation at the railway station and were hauled off to the nearby police station. "Even the police were shocked that I had been married off to such an old man," recalls Maina. "He tried to hit me in front of them, so they locked him up." Taking advantage of the surroundings she was in, Maina broke off her mangalsutra in front of the police. They took her to the MV Foundation school in Alur, thinking that would end all her troubles. This wasn't to be, as her mother showed up a month ago claiming her "husband" wanted her back. Though her future looked uncertain, Maina refused to go. She is not quite sure what to do next. What she does know is she will never to go back to that "old man". 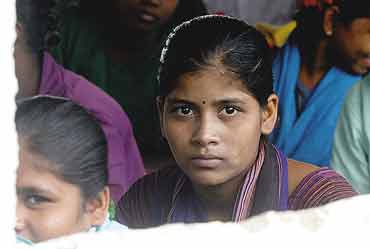 Archana, age 16
Wedded to a vegetable vendor across the border in Gulbarga in Karnataka, she faced constant harassment till she decided to walk out of her marriage some two years ago and go back to a regular school. "I’d do all the work but they wouldn’t even feed me," she recalls. She now hopes to go on to college and eventually train to become a teacher.

In most villages across the state's Telangana and Rayalaseema regions, girls are routinely married off as soon as they attain puberty. "The marriage season, which falls in summer, becomes a real nightmare for young girls in these areas," says Sinha.

Examples abound. Maniamma, also from Basheerabad, was married when she was just six years old. Now, at 12, she is uncomfortable talking about her past. Her husband, she says, was around 30 and a farmer from a neighbouring village.A few years ago he married again and threw Maniamma out.

Fifteen-year-old Jangamma was married off in the summer of 2003.She had just finished her Class 7 exams when her father decided to marry her to a rickshaw puller. The groom-to-be was mentally challenged and everyone, both neighbours and relatives, warned her father against it, says this 15-year-old from Eikicherla, Mahbubnagar district. Not only did her father go ahead with her marriage, he even promised to write off an acre of his three-acre farm as dowry. After the wedding, Jangamma was regularly beaten up by her husband and his brother who wanted the land papers handed over to them. She ran away to her parents, but her in-laws kept insisting she come back; even her father tried every kind of emotional blackmail to force her to go back. When she still refused, he committed suicide, as he had been threatening to do. However, despite constant jibes from relatives and neighbours who constantly hold her responsible for her father's death, Jangamma herself has no qualms on the subject. "People can say what they want," says the young girl. "It was not me but my father's own mistake and the harassment of that man's family that killed him." Quiet but confident, Jangamma says she wants to study on and become a doctor one day. 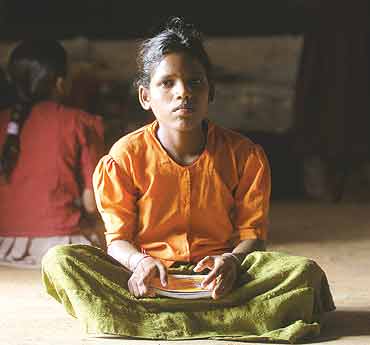 Maniamma age 12
She was married off when she was just six to a farmer from a neighbouring village 24 years her senior. A few years, ago, he married again and threw Maniamma out of his house.

Like Jangamma and Susheela, these young girls view education most often as the best route to start afresh. Maheshwari, 15, had never been to school before, but her teachers at the MV Foundation school say she's proving to be a hard-working student. An elder sister brought Maheshwari to the Alur camp after she ran away from a drunken, wife-beating husband. Archana, 16 years of age, faced similar harassment when she was wedded to a vegetable vendor across the border in Gulbarga in Karnataka. "I would do all the work, but they wouldn't even feed me," says Archana who walked out of her marriage some two years ago and is now back in a regular school. She hopes to go on to college and eventually train to become a teacher.

Child marriages are not restricted to any caste or religion but are more common among SC/STs, says M.A. Vanaja of the Human Rights Law Network who is working on a report on child marriages in the Telangana districts of Mahbubnagar, Rangareddy and Medak. She claims the scale of the problem can be judged from the fact that this summer alone, her network tried to alert the administration about some 30 cases of child marriages, but none was followed up. "We also try to motivate the parents ourselves, but sometimes no amount of persuasion works," she says.

Summer is almost over now this year. But it will return on schedule. And with it more innocence, childhood and lives destroyed.