BJP got over anti-incumbency by fielding as many 46 new candidates. Raman Singh's clean image, good governance and the subsidised rice and kerosene scheme also helped 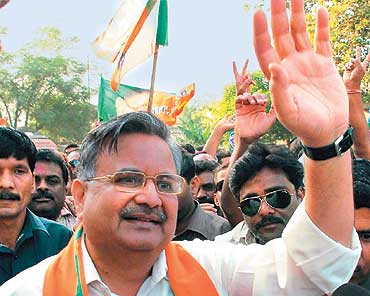 Why BJP Won: Like in Madhya Pradesh, the BJP led by Raman Singh successfully tided over anti-incumbency in Chhattisgarh by fielding as many 46 new candidates. What also returned Singh to power was his clean image, good governance and the subsidised rice and kerosene scheme which made his government popular in the tribal belt and among the poor.

Why Congress Lost: A divided Congress dug its own grave. Ajit Jogi, who was expected to propel the Congress to power, had a running feud with other senior party leaders—AICC treasurer Motilal Vora, state unit president Dhanendra Sahu and veteran party V.C. Shukla, back in the party after some luckless grazing around. Result: a campaign that saw bickering and back-stabbing from ticket distribution onwards. The Congress ran itself out of the race.

Victor-Speak: "The victory was the people’s approval of the BJP government’s schemes and development plans. My main priority will be to maintain the flow of development and ensure peace." —Raman Singh, Chhattisgarh's new CM.