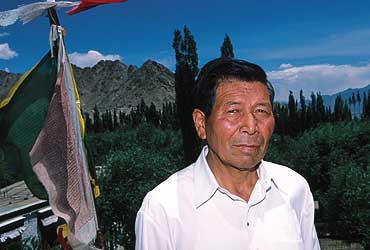 A civil engineer by training, this 64-year-old has achieved for the Ladakhis a marvel in low-cost appropriate technology. Norphel has mastered the art of making artificial glaciers and then harvesting them for irrigation use.

Norphel has already made 10 such glaciers. His idea is simple yet striking. Using nothing more than a few hundred metres of iron pipes, stone embankments and a whole lot of ingenuity, he diverts water from a stream into a man-made channel. The channel has some 70 outlets through which water drips down the mountain slope and freezes even before it hits the retaining walls built along the lower reaches of the slope. The walls remain concealed under the glacier until April when the mercury starts rising, just the time farmers need water for their fields.

It’s a blessing in the cold desert that Ladakh is. Here, farmers harvest just one crop of wheat, barley or peas a year and rely mostly on glacier melt because it seldom rains in this ‘desert in the skies’. The cropping window too is also a short six months after which severe winter sets in. Norphel’s technique now gives them a head-start in the supply of water.

Faradays In The Backyard