Cherub In A Rugby Field 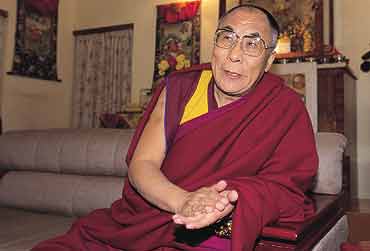 Understanding The Dalai Lama
By Edited By Rajiv Mehrotra
Viking/Penguin Rs 395; Pages: 296
The 14th Dalai Lama left Tibet 45 years ago last March, for what now looks likely to be a permanent exile. He has become much more than just another former ruler driven out of power by a superior force, and is probably more influential than if he had been able to remain as ruler of his homeland. He is today one of the best known and most admired people in the world. He is a celebrity, who appears at charity rock concerts, whom film stars travel thousands of miles to meet, whose words of wisdom adorn wall-hangings and tea-mugs around the western world, and whose unquenchable smile adorns dozens of books about Tibet and about Buddhism.

So much hyperbolic baloney has been written and spoken about the Dalai Lama and so much fawning obsequiousness surrounds him that it is hard to make an honest attempt at understanding him, and making sense of the role he plays in the world. For this reason, I approached this volume of essays with deep misgivings. Those misgivings increased when I read on the book’s dust-jacket that the Dalai Lama is "universally recognised as the best hope for peace and amity in today’s troubled world". Really? Try telling that to the Chinese government. I flicked through the pages of the book, stopping on page 216, where Lama Thubten Zopa Rinpoche tells us that "His Holiness is incomparably kinder to us, the fortunate disciples in many countries who are able to see his holy body and hear his holy speech, than all the past, present and future Buddhas." Gulp.

It was a relief then to discover that this book, despite a few further moments of unabashed hagiography, contains a well-rounded, down-to-earth picture of one of the modern day’s most extraordinary and intriguing public figures. The Dalai Lama, himself, for a start, is troubled by some of the more extreme assertions made about him. He doesn’t claim to be a living god; he doesn’t even claim to be an incarnation of the Buddha. He insists, despite the attempts of some of his followers to deify him, that he is a Buddhist monk. He may have had the most unusual of lives but he also comes across as very human. In the course of these essays (by writers as varied as Pico Iyer, Isabel Hilton, Anees Jung and Ela Gandhi—there’s even a poem by U.R. Ananthamurthy), we learn that the Dalai Lama uses an exercise bicycle, that he enjoys repairing watches and would have liked to have been an engineer, he is not a vegetarian, he likes to talk about his kittens, and he listens to the bbc World Service every morning.

One of the most interesting pieces is by his ghost-writer, Alexander Norman, who is neither a Tibetan speaker nor a Buddhist. Norman first met the Dalai Lama in the late eighties, and describes him as someone who, in another life, might have made a useful rugby player, and who looks, when smiling, like an "earthy cherub". He refers to, as do several contributors to this volume, his vigorous and startling soprano laugh. And the "autobiography" that Norman wrote is no ordinary piece of ghost-writing. A committee of advisors and translators, headed by the Dalai Lama, went through every single sentence.

The Dalai Lama comes across in these essays as an intelligent, imaginative and compassionate man, who is interested in other people’s ideas and who is happiest discussing religious and philosophical issues with scholars and believers from a wide range of faiths and backgrounds. Swati Chopra’s chapter about the Dalai Lama and science persuasively portrays him as a man committed to a dialogue between Buddhism and modern science; Thupten Jinpa’s excellent essay describes the role of monasticism in Tibetan Buddhism, pointing out how the Dalai Lama has reformed the Tibetan Buddhist cosmology, upsetting a few elders on the way, by adopting the post-medieval position that the earth revolves around the sun. Jinpa—the Dalai Lama’s long-time translator and a Buddhist monk—detects a rare note of impatience on the Dalai Lama’s part when he failed to convince some of the elders, and goes on to lament the fact that he, unlike most of his predecessors, has failed to write any major scholarly treatises in Tibetan.

Perhaps that’s because the Dalai Lama is a busy man with an impossible job. His Tibetan followers expect him to save Tibet, his international followers expect him to save the world. Neither of these tasks appear to be within his powers. But he has done something that no one else could have done. He successfully straddles two very different worlds, of medieval monasticism and celebrity superstardom, and has managed to keep the flame of Tibetan resistance and culture alive.