The fragrance of jasmine fills the air with a sweetness that brings to mind images of clouds and birds and the intoxicating rhythms of ancient Tamil poetry. 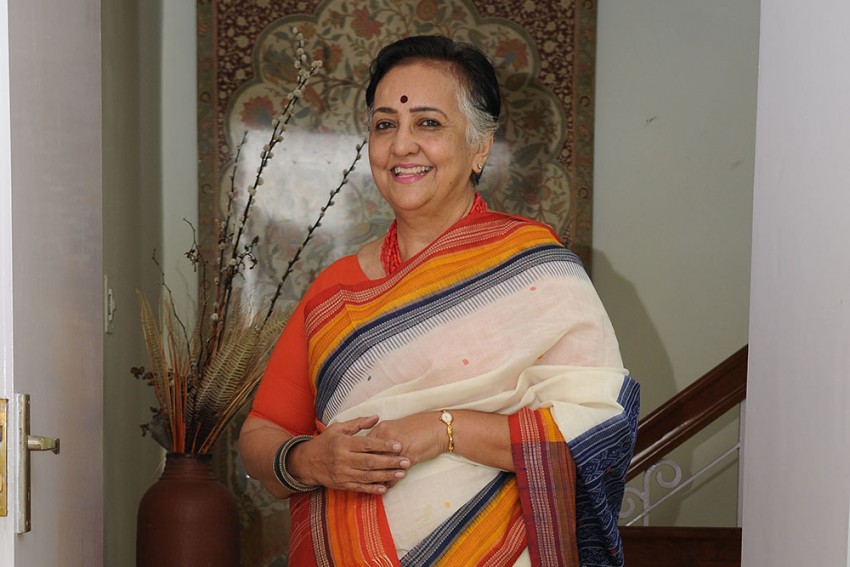 outlookindia.com
2016-05-13T20:59:39+0530
Goats in summer
“I think I’ll take the goat,” I said. Lakshmi my cook-lady sniffed. Being a native born Tamil it was more like a goat sneezing. “Ptchay!” As a veteran harvester of free gifts to the voters of Tamil Nadu, she had the list off her fingertips.
“They are offering laptops,” she said. “The other side is promising free Wi-Fi. Why do you want a goat?” “My grand-mother kept goats,”I explained. “Whenever we went to her house in Thallassery, she bought a nanny-goat with a kid for us to play with. I remember one of them had a white pelt and a beard that she allowed us to stroke. Thallassery goats from north Malabar are famous. Even today.”

She warned that I might not get a white goat, but a black-pelted one. “No matter what they promise, these things don’t always work. Wet-grinder. Mixie. Table fan. We have them but only so that the neighbours can see.” “You have your tchell,” I reminded her of the cellphone. “China tchell. It’s stopped working long ago.” “That’s why I want a goat. At least it’s a homegrown, made in Tamil Nadu. Namma Attu. Our goat. Not made in China.” “Ptchay!” said Lakshmi.

Meanwhile, it was nostalgia time at the Binny Room of the iconic Connemara Hotel, now known as the Taj Vivanta Connemara. S. Muthiah, the city’s favourite historian had chosen the room to launch his Office Chai, Planter’s Brew, co-written with Ranjitha Ashok. He had gathered a distinguished group of ‘box-wallahs’, as they used to be known to share their stories. They belonged to the first generation of Indian chairmen and managers taking over the industrial and trading houses started by the British. Like retired generals, they brought alive memories of battles fought and won over the boardrooms and parlours of companies with names such as Parry’s, or Binnys. Typical of his time, was John Binny, a Scotsman who acquired the original plot of land from the Nawab of Arcot in 1799 on which Connemara now stands. Back then it had a bungalow, a “house on the choultry plain” that passed through a number of hands as a boarding house. Then, Spencer & Co, a leading trading house in south India bought it in 1891. They also had a marvellous property in Bangalore, the West End Hotel, and the Savoy in Ooty, all three under the Taj group now.

The Nawabs of Arcot played many colourful roles in the different phases of the hotel’s ­history. When Lord Connemara came to the city as governor in 1888, the Nawab of Arcot extended his hospitality by providing companions to entertain the governor. This so enraged the governor’s wife, Lady Connemara, that she left the government house and moved to the hotel. And so it was renamed the Connemara.

And winter was when the planters and their wives came down to spend Christmas and New Year at the Connemara. The cooks would roast their turkeys  and get the local bands to play Auld Lang Syne at the annual New Year’s Ball. But by the time Muthiah ended his presentation, it was almost time to start singing Auld Lang Syne for the hotel that will be closed May 10 onwards. As the Taj Vivanta Connemara is shut down for re-construction, we recall the words that Kipling used to describe the city of Madras with a slight change: “Spencers kissed me on the mouth and brow, wonderful kisses. I became a famous name, in Southern hospitality. A ­withered beldame now, waiting for a face-lift.”

The scent of jasmine

It’s the time of the year that we call Agni Nakshatram or the dog days. The heat is so ­intense that some people describe it as kathiri veyil (with the sun rays like scissors—kathiri in Tamil—slicing through the sky’). As though to make up, at every corner you find sellers tying creamy buds of jasmines from the fields of Madurai into garlands for the hair. The fragrance fills the air with a sweetness that brings to mind images of clouds and birds and the intoxicating rhythms of ancient Tamil poetry. It’s a time when trees bend down with flowers, a time for yellow sprays of amaltas, pink urns of cannonballs and strings of beaded odina.

This year the streets are also busy with the sudden roar of motorcades and party workers brandishing flags. May 16 is election day. A lone woman stands on the pavement watching them. She wears a red plastic bucket turned down on her head like an old fashioned London bobby. “Noise,” she says. “It’s all noise.”

As the freebies rained in Tamil Nadu ahead of the elections, the wisdom of Deng Xiaoping came to mind: “It doesn’t matter if a goat is white or black as long as it catches the voter.”

Journalist, writer and reviewer, Geeta Doctor has also published a volume of poems, What We Leave ­Behind. In 2008, she won the ­Angarag lifetime ­achievement award for her ­contribution to journalism.