Cheer Up, The End Is Nigh

Shop, travel and eat-the new prescription for the post-terror era 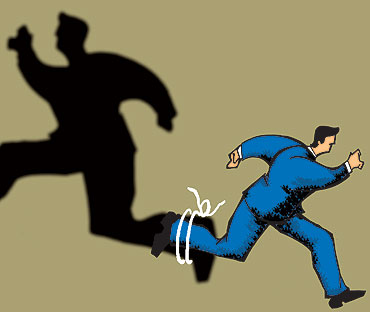 outlookindia.com
-0001-11-30T00:00:00+0553
We've had more than our share of ups and downs, no? Hotels and sundry other places have been blown up (almost), while the Sensex and most indices of economic health have been heading south with such desperation that you'd think Kanyakumari holidays were going out of style.

Naturally, spirits have felt more gravitational pull than tides at full moon or thighs at full middle-age. All the world and its investment advisors have been going around wringing their hands in total despair—and sometimes their own necks or somebody else's. In its traditional season, goodwill towards all men has been in short supply, and not only because wills, good or bad, are no longer worth the paper they are attested on. As for peace on earth, there's so much bloodshed all around that red truly is the new black.

So what do we do? Hang up our boots instead of our Christmas stockings, hunker down under our razais, and await the end of the world as we've known it? Nonsense! We must do all the things that magazines say we must at festive times. However, because these are very different times, I have also factored in a Terror Modification, or TM.

Shopping: Retail therapy is always a good antidote against wholesale gloom. In normal circumstances, the prescription would feature standard stress-relievers from spas to sparring classes. The luxo-bling crowd can buy ego-sized sparklers. Or the Bentley key-fob iced with 101 diamonds, which really allows you to lose your car keys in style, or twirl it insouciantly round your finger when you lose the car itself to your creditors. Faux jewellery can add as much lustre to lesser lives.

TM: If you want something custom-tailored to these times, you could go look for a terrorist, Shiv Sainik, standard politician—or rogue banker. All these lines have been so shop-soiled this season that it is possible to get a really cut-price one. You may well be able to hunt down a bargain in the basement where he might be hiding.

Travel: When there is no getting away from grim reality, people foolishly try to get away from it all. Whatever that Chandrayarn might say, you may not fancy calling up your travel agent and booking a moon tour. Why go through all that expense, bother and totally unflattering gear when any cityscape is close enough to the lunar surface? Besides, out there you can't even get a glass of steaming tea, or take a random pee. Alaskan cruises have become passe now that their clientele includes the Lajpat Nagar seller of sequinned 'suits', but they may get a second wind when repackaged as global warming tours. New Zealand did look like the next big thing, but it could as well be Ireland or Finland or a Chinese Disneyland, complete with Mickey Mao.

Again these are difficult times, and what was supposed to be the cost of a mere holiday might well have become the shrunk total of all your working-day earnings. The faux-bling equivalent in travel is 'discovering' that tucked away beach or hamlet, a rucksack's throw away from your own doorstep. Unfortunately, population and urbanisation are making these extremely difficult to find, however persuasively travel supplements try to convince you that these are not just a mirage with bad plumbing.

TM: Travel for our times would put terror tours on the top of the agenda. And now that Ram Gopal Verma and the Irani owner of Leopold's Cafe have legitimised it, the new breed of blackpackers can go ahead and ignore the howls of righteous indignation. Despite all the 'Enough is Enough' slogans, you can bet your last pellet of RDX that newer such destinations will continue to be added to the Blownly Planet guide.

Food & Drink: As any psychologist, dietician or jilted teenager can tell you, there's nothing like stuffing your gob to forget the loss of your job or other current woe. The Greek hedonist philosophy of eat, drink and be merry for tomorrow you die has acquired chillingly contemporary resonance. There are many of us who don't need an economic downturn or terrorism's upped ante to send us into a feeding frenzy, and we can vouch for the fact that an evening of good food with friends and a favourite tipple is a great stress-buster. You don't even have to break a non-failed bank because in this department, extremely cheap options still exist. This is not bhutta time, but every season has its comfort specialties. Top of the list is warm moongphalli, the truly Bharatiya Janta Munch.

TM: In today's scenario, tearing apart a terrorist limb by limb greedily as though he were a fatted calf of ancient banquets would be not only hunger-satisfying and therapeutic, but also a socially meritorious and public-spirited act. Even vegetarians are permitted to bend the rules, or enjoy vicariously.

Bad time? Go have a good one.