The people behind it may be upright. But in the hotel sales, did they err in valuations? More Coverage 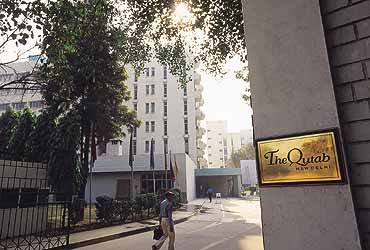 outlookindia.com
-0001-11-30T00:00:00+0553
It seemed as if they were trained to speak the same words in the same appreciative tone. Without exception, the new owners of the government-run hotels that have recently been sold praised disinvestment minister Arun Shourie. "No one was favoured in the process," says Lalit Suri, a Rajya Sabha MP and owner of the Delhi-based Bharat Hotels, which picked up three properties. Adds Sushil Gupta, who owns the Grand Hyatt property and successfully bid for the state-run Qutab Hotel, "The bidding was open and transparent." Shourie himself has taken it as a personal affront when critics have alleged wrongdoings in the ongoing spate of disinvestment.

Just a few days ago, he got emotional when a Shiv Sena MP, Sanjay Nirupam, accused him of favouring a bidder and his colleagues of being corrupt. But as the days go by, the lingering doubts that everything was not hunky-dory with the disinvestment process are gaining strength. And this seems especially believable about the manner in which the properties owned by the India Tourism Development Corporation (ITDC) and the Hotels Corporation of India (HCI) were sold. In fact, the disinvestment minister himself has partially accepted this by referring the matter of the sale (and subsequent resale) of HCI's Airport Centaur in Mumbai to the law ministry.

The Airport Centaur matter only relates to legalese about how the buyer was allowed to resell the property within months, and at a huge profit. But there is a bigger—and more controversial—issue involved. And that is the almost decade-old charge that public enterprises have been sold at a song to private bidders. Well, the accusation has never stuck in the past. So, why should it now? The answer: simply because the government may have, wittingly or unwittingly, erred in valuing the hotel properties before they were sold. And that is, directly or indirectly, confirmed by a number of players involved in process—from the government's advisors to the new owners.

Despite a faxed questionnaire, and several phone calls, disinvestment secretary Pradip Baijal did not respond. But others did as we tried to piece together this story. To begin with, we first need to look at how the government valued these properties to arrive at their reserve price or the floor price below which they could not be sold. Managers in Lazard India, the ministry-appointed advisor, explained that valuations were based on the traditional discounted cash flow (DCF) methodology which basically discounts future earnings on predetermined occupancy rates (rooms occupied in a year as a percentage of total availability).

The advisors realised they could be charged with undervaluing the assets if the reserve prices were calculated on the basis of current occupancy rates which, in many case, were abysmally low at 30-40 per cent due to (among other things) pathetic upkeep and maintenance. So, Lazard India assumed that the new owners would run their properties as efficiently as their competitors in the same region. "We sent a team to assess how competition was faring in specific cities and decided to hike occupancy rates to be used to calculate future earnings accordingly," explains a Lazard manager. Adds Ashish Guha, CEO, Lazard India, "In some cases, future occupancy rates were doubled compared to the current figures."

Obviously, the dues attached with each property, like payments to local bodies or other government agencies, were also disclosed to the potential buyers. To make the process more transparent, the scope for building commercial complexes in the ITDC properties at Aurangabad and Varanasi were taken into account while valuing them. On the face of it, there seems to be no reason for any complaints since most of the properties were sold above their reserve prices.Well, there wasn't, until we spotted a glaring hole in the DCF methodology. The government, it seemed, had overlooked a critical parameter.

Almost all the properties that were sold had the option to substantially expand the number of rooms as per the existing floor area ratio (FAR). For instance, Qutab's new owner Gupta admitted that he can easily increase the number of rooms from the existing 65 to over 200 apart from revamping 30 service apartments now lying vacant. Similarly, Bharat Hotels' Suri revealed that another 2.5 lakh sq ft area could be used up in the Bangalore Ashok, which he purchased for nearly Rs 40 crore. "We will probably use the space to build a convention centre, a few service apartments and other outlets. But that will not happen immediately," he says. Even the Madurai Ashok, purchased by a Trichy-based transporter-hotelier, can almost double its rooms to 100.

Most of these buyers were also confident that the expansion process would be initiated next year, after the renovation of the existing rooms and facilities was over and the hotel was up and running for the next season. (Given the state of affairs at both ITDC and HCI, every owner is revamping existing facilities and fac#ades in a bid to upgrade the hotel's star ranking and make it better-looking.) Clearly, the expansions will rake in extra revenues for the private hoteliers and, hence, should have led to higher reserve prices. But, surprisingly, this factor was not taken into account while calculating the reserve prices. Why?

"Given the hospitality market, it was possible to believe that the owners would not go in for further expansion. Therefore, it didn't make any sense to take that into account while valuing the properties," explains a Lazard manager. Successful bidders also support the government. They contend that even if the disinvestment ministry had not taken possible expansion into account, the bidders did. "When we bid for eight properties (and got three), we knew the scope for additional construction as per the existing FAR. So, our bid price reflected the potential to earn extra revenues in the future," explains Suri.

Moreover, according to him, the reserve prices were immaterial since none of the bidders knew about them. The buyers only quoted a price according to what they thought the market value was, and not in accordance with the reserve price. So, the logic goes, if the ministry had indeed hiked the reserve prices by taking into account the expansion potential, it would have either not been able to sell any property, or done so at a price below the reserve price. (That's a thought, since one can imagine the furore in Parliament if the latter had actually happened in the case of big-ticket properties.)

In the past, Shourie has also defended the low prices ITDC hotels have fetched on the basis of the huge liabilities attached. These were either related to dues payable to employees, municipal authorities, other local bodies, or to the Airports Authority of India in the case of HCI hotels. But then, it must be said that in most cases, the bid prices included these liabilities. As a senior ministry official explains, "We told the creditors that the new owners are bound to pay them and that the money will come from the price that they pay for the properties." In case of nine properties, even the VRS amount for workers who had already opted for it was included in the bid price.

Given these realities, the actual amount that flowed into government coffers is much less than the figure that is normally touted by the disinvestment ministry. Although overall details are not available, of the Rs 510 crore ostensibly earned by the government, Rs 60 crore was set aside for dues that were payable and another Rs 50 crore for VRS.It's when we get to specific properties that one can understand the yawning gap between what was projected as inflows and what actually came in. Only a few examples are enough to illustrate it.

The Delhi-based Lodhi Hotel was sold for over Rs 76 crore but the government got just Rs 40 crore. In case of Qutab, the real inflow was Rs 10 crore, compared to the sale price of over Rs 35 crore. Hotel Khajuraho fetched a mere Rs 10 lakh, although the bid price was Rs 2.2 crore. Kanishka Hotel in Delhi was sold for Rs 96 crore but the outgo attached with it included Rs 2.8 crore to nbcc, Rs 12.3 crore to the ndmc and Rs 13.46 crore for VRS to most of its employees. Finally, in the case of Airport Ashok in Calcutta, the government got just Rs 5.64 crore out of a sale price of Rs 20 crore.

Once again, Shourie's supporters see nothing wrong with it. "If the liabilities had not been included in the bid price, the buyers would have quoted a lower price. Ultimately, the government would have got the same amounts as it has now," says one of them. Fair enough, but then the disinvestment ministry should openly accept that it got much lower prices than it claims. And that not all of the buyers were saddled with the task of getting rid of the employees.

What Shourie's critics are peeved about is the fact that although his ministry claims to be "open and transparent", it doles out information in dribbles. This has been especially true of hotels, where each property had different traits and clauses attached to it. For instance, petroleum minister Ram Naik has said that Juhu Centaur in Mumbai, sold to former Indian Hotels' chief Ajit Kerkar, had a profitable petrol pump on its premises which should have been included as part of the hotel's assets. Similarly, Shourie himself has admitted that he gave an extension to Kerkar for furnishing the requisite bank guarantee after he received calls from senior Shiv Sena leaders.

The case of the Airport Centaur in Mumbai too is now in the public domain. Norms were changed midway, future payment liabilities on the buyer—the Delhi-based Batras (minor partners in the city's Radisson Hotel)—were reduced, after which they managed to sell the property at a huge profit within months. All these raise the obvious questions like if future liabilities were reduced, was the reserve price hiked to that effect and how come the Batras got a better offer than the government? Even at this time, there are no clear-cut answers. Except that Shourie has denied all these allegations and referred the matter to the law ministry.

At this stage, the only way out for Shourie is to come clean on the matter. And to put all the papers pertaining to hotels disinvestment before the public. These should include, among others, the detailed calculations of the reserve prices, the sale agreements and the details of the assets along with their liabilities. Knowing the disinvestment minister's penchant for a clean image, we hope that this is what finally happens.