Charred Wick In The Alcove

The iconic Smita Patil would have been 60 this week. A new biography traces her life, her untimely death and her glorious, meteoric career. Excerpts. 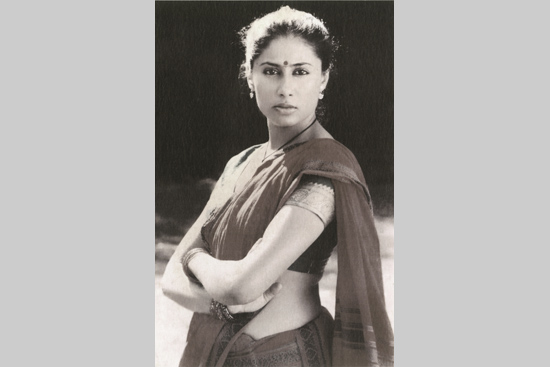 “It was the best of times, it was the worst of times; it was the age of wisdom, it was the age of foolishness; it was the epoch of belief, it was the epoch of incredulity; it was the season of light, it was the spring of hope, it was the winter of despair.” It is tempting to see analogies of Smita’s career in these lines. We most certainly had great expectations from Smita and she lived up to them gloriously. Many landmark films were made in the 1980s. She added to her repertoire a few others that were socially significant, even if it was the male lead who essayed the protagonist while she played an important role. Some of these films were decent enough, though they fell well short of cinematic excellence or innovation. A lesser actress would be proud of them but then, we are measuring them against Smita’s best. We would even be justified in feeling cheated or betrayed by some of the films she did. She had made the choice to straddle two worlds, the parallel and the mainstream. The 1980s saw a dive to a particularly low point in formulaic films. It was a period when the industry churned out the good, bad and ugly with unequal fervour. The good were very few, the bad were many, and the ugly were overwhelming.

It was an uneasy ride through the decade, balancing the epochal impact of films like Bhavni Bhavai, Chakra, Umbartha, Arth, Tarang and Mirch Masala against the mindless mediocrity of Badle Ki Aag, not to speak of an execrable Haadsa and Kaanch Ki Deewar. Luckily, there were the in-between exceptions and exceptional forays into regional films, like Aravindan’s Chidambaram. Smita’s very presence commands us to source and scramble, to find forgotten films like Anokha Rishta and Anand Aur Anand. So, to paraphrase Betty Davis’s famous warning—fasten your seatbelts, it’s going to be a bumpy six-year ride. To follow a strict chronological order is confusing because sometimes, you have films of all kinds made in the same year. Trying to find a pattern in the choices she made is impossible.

The decade began brilliantly. Smita was cast in a Satyajit Ray film, though her role was not central. She got the recognition that most actors working in art cinema so ardently desired, even if they shied away from expressing it openly. Piroj Wadia, interviewing Smita, asked her soon after Bhumika if she would like to work with Satyajit Ray. Piroj remembers how she let out an audible gasp of joy: “I’d love to, and after all, he’s the ultimate in any actress’s ambition.” An ambition she was to realise soon enough. Ray made the first telefilm, Sadgati (1981), in Hindi for Doordarshan. Ray, the critic, had keenly watched the rise of parallel cinema, so much of it dir­ectly inspired and indirectly influenced by his own pioneering work. The relationship between the master and the next generation who owed him an immense debt is rather ambivalent, because Ray was also one of the best film critics in the country who did not spare even his own acolytes when they went wrong. For his short film based on Munshi Premchand’s story, he picked two of the finest exponents of the Indian New Wave. Sandip Ray says his father too wanted to work with Smita after he saw Bhumika and Manthan. He was fond of her acting, and this fondness soon extended to Smita as a person. “It was a dream to work with her. She was absolutely professional.” Encom­iums indeed from Ray, father and son. 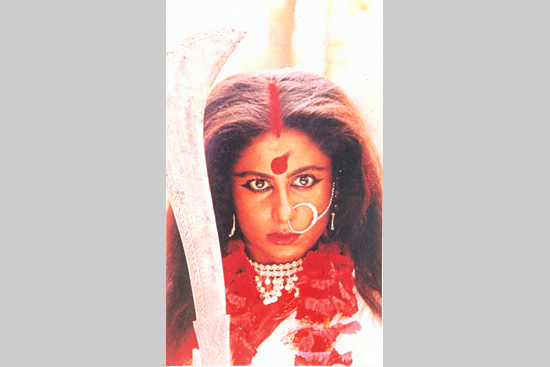 For Sadgati, Ray chose two of India’s best actors. He wanted to work with Smita after watching Bhumika and Manthan.

Sadgati (Deliverance) is a relentless, naked expose of the oppressive caste system prevalent in rural India. “Sunil Ganguli has described it as Ray’s ‘cruellest’ film,” writes Andrew Robinson in his definitive book on the films of Ray, Satyajit Ray: The Inner Eye. Ray himself said: “Sadgati is a deeply angry film, but it is not the anger of an exploding bomb, but of a bow stretched taut and quivering.” Om Puri and Smita Patil are the inevitable choice to play the untouchable couple who approach the priest to perform the necessary rites for their young daughter’s betrothal. About the casting, Robinson writes: “In casting Om Puri as Dukhi and Smita Patil as Jhuria, Ray selected the finest actor and actress of the post-Independence generation. In Deliverance, both of them are able to convey with searing truth the struggle of poor people to remain human under inhuman pressures; there can be no higher praise than to say that their performances are on par with Chunibala Devi’s in Ray’s first film. Neither of them have a conventionally attractive face...but both have the rare capacity of transforming their appearance according to mood.”

The wily, well-fed Brahmin (Mohan Agashe) calls Dukhi (Om Puri) for a day’s arduous labour, and denies the poor man food all day. Dukhi has just recovered from fever and has no time to eat before he sets out for the priest’s house, much to the anxiety of his worried wife Jhuria (Smita). He tells her to keep all the items required for the sagai and sets off. Jhuria is a simple woman. The way Smita memorises the list—one seer aata, half seer chawal—and keeps getting them mixed up and corrects herself with a little laugh is endearing. After doing sundry other jobs, Dukhi is given a huge log of wood to chop before the Brahmin deigns to come to his house and perform the ritual. Om Puri uncomplainingly does the exh­austing work as the indolent priest takes a nap after a sumptuous meal. Dukhi collapses and dies. Ray films this tragic oppression with a brutal kind of honesty that is edged with occasional touch of sardonic humour. The disposal of a lower-­caste’s dead body by the Brahmin is the dilemma—it reminds us of the Kannada classic Samskara—that reaches an impasse. A tribal who has seen Dukhiya collapse warns men of his caste not to help dispose the body. It is the Brahmin’s nemesis and let him deal with it. 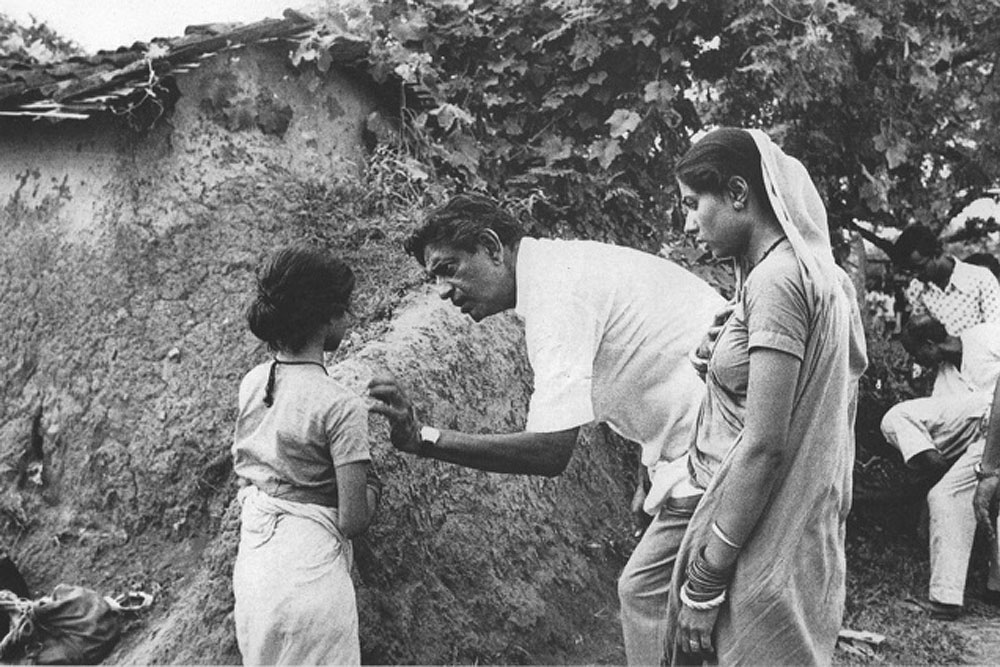 When Jhuria learns of her husband’s death, her anguish can only be conveyed physically; she falls to the ground amid a herd of cattle. She is reduced to the state of mute cattle. Earlier, we see her sitting against the wall, dozing as the young girl plays hopscotch in the yard. She has been waiting for Dukhi to come home with the priest. Instead, she runs to the front yard of the priest’s house where her husband’s corpse lies, abandoned by heartless caste hierarchy. She weeps over it in utter despair. The Brahmin drags the corpse, a rope tied to its leg, all the way across the outskirts of the village, to leave it beside a dead buffalo and other animal skulls. You don’t see Jhuria again. The final brutality deepens the hopelessness of her fate. In terms of the centrality of roles and screen time, Sadgati is Om Puri and Mohan Agashe’s film. But Smita leaves her imprint as the innocent victim of a fate that is decided by the capricious cruelty of others. By now, Smita has mastered the art of making her presence felt, even if she doesn’t utter a word and seems to melt in the shadows.

Om Puri recalls how Ray changed his shooting format for this scene. He had alr­eady made his shot division. The afternoon was overcast and rain was imminent. Smita was to leave Raipur by train that evening, to reach Nagpur from where she would fly to Bombay, and then onwards to New York. Smita was part of the delegation for the Festival of India in New York. Ray, calling out in Bangla (Om’s detailed recollection), quickly got a 100-foot trolley track laid and shot Smita’s scene where she runs to her husband’s dead body in two long takes, while it was raining. Ray made the fortuitous change to accommodate Smita’s travel schedule. It added to the poignancy of the scene, as the heavens weep for the disinherited on this earth. As Om recalls, the rain stopped soon after the shot was over. The weather gods themselves helped a master improvise for better effect.