One with pictures, the other with conversations, two Dilliwalis map the changed and changing face of Delhi 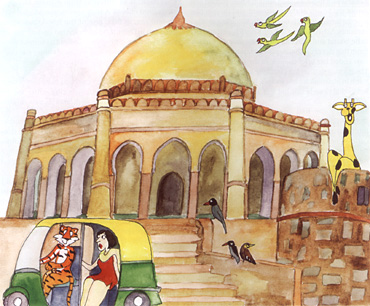 Invisible City
The Hidden Monuments of Delhi
By Rakshanda Jalil
Niyogi Books Pages: 220; Rs 595
"What is the use of a book without pictures or conversations?" asks Alice. Two Dilliwalis’ books, one with pictures and one with conversations, the first evoking the long history of the city, the other a short history of the last 50 years. For both, 1947 is the year that marks the beginning of irrevocable change.

Jalil’s essays cover ground trodden by several others. Many buildings are seen, as in Karoki and Charles Lewis’s book, in the setting of ‘urban villages’. Like R.V. Smith, she weaves in local history and myth. There are also quotations from Rahim, Bedil, Zafar and Iqbal; given Jalil’s familiarity with Urdu, we could have asked for more, as well as for some sense of how these monuments were seen by Dargah Quli Khan, Sayyid Ahmad Khan and Bashiruddin Ahmed, writers many of us have no access to.

What makes Jalil’s book different is the photographs (by the well-known photographer-writer D.N. Chaudhuri) and the utterly delightful watercolours by Premola Ghose, whose cheerful family of animals has become as familiar to us as the Air India Maharaja or R.K. Laxman’s Common Man. Through the antics of the animals, Ghose’s paintings draw our eyes to details in the monuments (floor mosaic, gateway embellishments, adjacent buildings) in a way that would be impossible through words or pictures.

If Jalil’s USP is the pictures, Sengupta’s is the conversations. She disaggregates the metropolis into different landscapes (‘urban villages’, Lutyensabad, ‘refugee’ Delhi, ‘government’ Delhi, middle-class colonies and—the shape of things to come—Gurgaon). Through conversations with planners, architects and local inhabitants, she seeks to understand how "different Delhis coexist alongside one another, often wildly disparate, even contradictory" as well as "Delhi’s well-articulated unpopularity". We read how, by dramatic changes in land-use through fiat (by the DDA) and by private pre-emption (by DLF), a depressingly divided city (crowded and devastated Shahjahanabad, haughty Lutyensabad with its wide open streets, clusters of refugee settlements) grew by infill into a mosaic of class-based neighbourhoods. Nostalgia, regret, impatience colour the monologues of the senior citizens interviewed.

Indian towns have so many things in common that it’s a little unreal to suggest that "Delhi’s post-Independence middle-class life...often unsatisfactory... occasionally unbearable...is uniquely Delhi" (Sengupta). I also wonder at a sophisticated writer like Jalil describing the landscape as a binary of "the chaos and clutter of (Delhi’s) villages and the glitter of shining India". There is plenty of spectacular chaos and clutter in Delhi’s upmarket neighbourhoods; she could have discussed how the villages are examples of efforts by communities to reinvent themselves as shopkeepers and landlords after losing their fields and pastures and being denied water and sewerage. This story’s partly narrated by Sengupta. For the inhabitants of urban villages, she concludes, "their loyalty is not to Delhi, for which they express contempt. It’s to their land and community". An assumption of a homogeneous community is puzzling, following as it does on an account of the changes in many of them in 1947, when many Muslims left and Hindu immigrants moved in.

Both writers deplore the general indifference to Delhi’s history. Sengupta is convinced the reason why "Delhi’s journey to...a popular, citywide consensus on the significance of both classical culture and conservation is a long one" is because of the "lack of a single regional identity". But which of our cities has "a single regional identity" other than the Mumbai of a Thackeray’s wild imagination? Jalil places the blame on a ‘Delhi’ one is hard put to identify: "Delhi has allowed the cloak of oblivion to fall, hiding several inconvenient piles of old rock that stand in the way of urbanisation;" "Where stray vigilante groups have raised voices of protest, Delhi has allowed—reluctantly and with ill-concealed contempt—some of these structures to stay". I would like to read it differently—it was one of the "stray vigilante groups"—the Conservation Society of Delhi—that in the ’80s and ’90s introduced historic areas to enthusiastic groups of citizens (thus institutionalising ‘heritage walks’), persuaded the DDA and the ASI to sit around a table and discuss conservation policy (compare the successive editions of the Master Plan to see how this made a difference) and used the PIL route and public meetings to save at least two monuments from demolition.