Accused of being ‘soft’ on India, a cornered Sharif faces a Hobson’s choice over selection of a new army chief 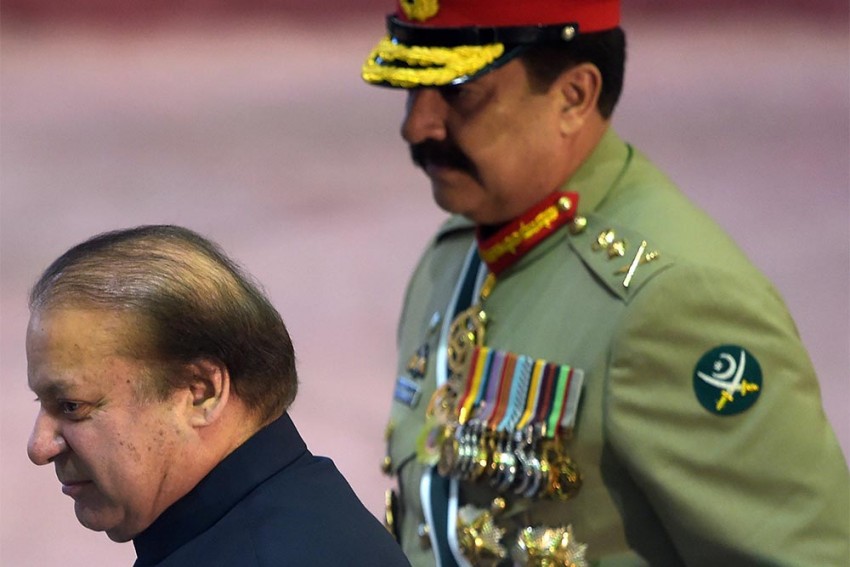 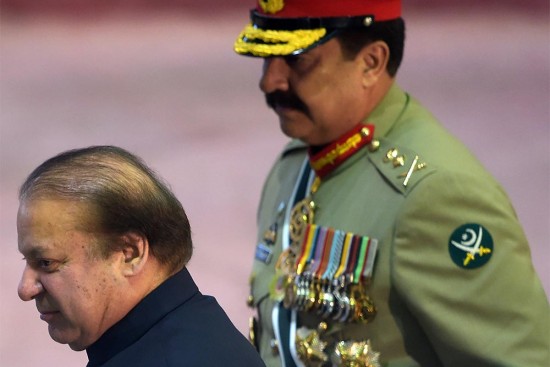 Pakistan’s corrective measures to deal  with the situation

In a country that has been ruled by the military for more than half of its 70 years of independent life, app­o­inting an army chief has always been a tough challenge for Pakistan’s emb­attled prime ministers. But re-app­ointing one seems even tougher.

Yet this is a dilemma that a beleaguered Nawaz Sharif, who is facing isolation both at home and abroad in the wake of the India’s September 29 ‘surgical strikes’, has to deal with now: should he extend the term of the current army chief Raheel Sharif, who retires in November, or should a new general get the job? Known for his testy relations with the army, Sharif, interestingly, also has the distinction of being the only Pakistani premier to have appointed six army chiefs.

Officially, Pakistan denies New Delhi’s ‘surgical’ claims and describes the strikes by the Indian army as shelling along the Line of Control—a routine affair that has often happened in the past.

Many Pakistani commentators too, are sceptical about what the Narendra Modi government has decided to highlight in public as ‘surgical strikes’ inside Pakistan at terrorist launchpads. But they are not con­vinced either about the Pakistani government’s explaining away of the operations.

“Surely, the Indian claim has far too many holes—but so does our story,” writes author and commentator Zahid Hussain in his column in Pakistan’s leading newspaper, Dawn.

This incredulity is also shared by several others in Pakistan who have turned their anger now towards Sharif for being “too soft” on India. Many of them want a “befitting reply” to blunt the gloating in India since last month’s military action, especially amongst BJP camp followers.

But when and how that response from Pakistan will come depends largely on the political leadership in Islamabad, or perhaps, more importantly, by the Pakistan army headquarters in Rawalpindi.

“Yes, the Indian claim of carrying out surgical strikes has weakened Sharif further and drawn criticism from the opposition of him being ‘too soft’ on India, forcing him to up the ante,” says Hussain.

Choosing the right man for the job to lead the army, therefore, becomes important for Pakistan. Thus, whether Gen Rah­­eel Sharif gets an extension has predictably generated even more speculative interest than is normal.

But while all this is being debated, there are also serious discussions within policy makers in Pakistan about its growing reg­ional and global isolation. “Surely, the gro­­wing perception of Pakistan’s diplomatic isolation has given further impetus to Modi getting more adventurous,” opines Hussain.

Pakistan’s diplomatic woes and the impact thereof came up for detailed discussion at a high-level meeting chaired by Sharif recently. According to media reports, the Sharif government informed the generals about the country’s growing international isolation. The meeting, attended by senior government officials and the Pakistani military, which was represented by ISI chief Gen Rizwan Akhtar, reportedly witnessed heated exchanges between Sharif’s brother and Punjab chief minister Shahbaz Sharif and the spymaster. The CM apparently told Akhtar that the government’s good work cannot be dismantled by the ISI in protecting jehadi groups in Punjab, like Jaish-e-Mohammed and Lashkar-e-Toiba. The verbal confrontation between the two and the rising tempers were cooled only on the PM’s intervention.

What caused consternation among those present at the meeting was, however, Pak­istan foreign secretary Aizaz Chaudhry’s information that not only were there few takers for Pakistan’s argument at the international stage, even China was advising Pakistan to change course.

According to Chaudhry, while China has put a ‘technical hold’ twice on a UN move to designate JeM chief Mas­­ood Azhar a terrorist, it has questioned Pakistan on the logic of having to do so repeatedly.

Predictably, the government has denied the media reports but the fact that Pak­istan’s isolation was forcing it to act became clear from some decisions taken at the mee­­ting. It was said that Gen Akhtar and the Pakistani national security advisor, Nas­­ser Janjua, would travel to various pro­vinces with the explicit message that nob­ody should interfere or try and prevent any action that might be taken against mil­­itant groups by security agencies in the coming days. The prestige of the army chief is linked with any military action in Pak­istan. So, will Gen Sharif get an extension?

PM Sharif, the aggrieved party in the 1999 coup engineered by Gen Pervez Musharraf, whom he had chosen over others only a year before, has not been on the best of terms with Gen Sharif. Yet, the chief is widely popular in Pakistan and is appreciated in the West, which acknowledge his tough handling of the security situation in Pakistan and his action against militants at the Af-Pak border.

After September 29, there is a growing view in Pakistan, including within sections in the ruling Pakistan Muslim League (N), that Sharif should give the  army chief at least a year’s extension. The PM is hardly in a position to ignore those voices. But he is also aware that an extension would mean that Pakistan’s India policy—as has been mostly the case—will remain firmly in the hands of the military, not him.

Beginning in 1991, the three earlier terms of Nawaz Sharif’s premiership were all truncated tenures. For his current term, his party won its highest ever number of seats in Pakistan’s parliamentary elections in 2013. Though he faced a tough challenge within a year from Imran Khan’s Pakistan Tehreek-e-Insaf and other opposition members on corruption, nepotism and rising violence in the country, a move that could well have thrown him out of power, he survived by making a deal with the army. He relinquished control on issues relating to defence and foreign policy, especially on how Pakistan should deal with India, to the army. Now, he has the opportunity of reversing that trend by choosing a general he is more comfortable with. But with so many wanting Gen Sharif to stay, will that be an easy decision?

“Nawaz Sharif is challenged, but then the problem was not created by him but the army headquarters, which controls the India policy,” says strategic affairs commentator Ayesha Siddiqa. “If you don’t run your own foreign policy then these will be the consequences.”

It is not that Nawaz Sharif did not try to wrest some of these powers from the army into his own hands. As a businessman, his instincts were to have good rel­ations with India, a natural market for Pakistani goods and investors. In addition, the exile in Saudi Arabia following the 1999 military coup also taught him not to rise to the army’s bait of toppling an elec­ted government. This was reflected when he did not disturb the Pakistan People’s Party government of Asif Zardari despite a growing disappointment with it among his countrymen. Maybe that was the reason why Zardari did not join others to try to topple Sharif from power two years back, when Imran Khan led a massive movement against his government.

Now that Sharif is attacked from all sides, questions are being raised about his government’s stability, and whether he could boldly engage India again.

“The relations are bad as it is. Of course, this confusion over whether India struck deep inside or not has raised tremendous caution and concern amongst the security establishment,” says Siddiqa. “The real fear is of the Hindutva forces. The str­i­kes are seen as manifestation of an ‘evil empire’ emerging in the neighbourhood,” she adds.

Hussain agrees, and points out, “It is a serious blow to any hope of normalisation process to revive. The jingoistic rhetoric has strengthened hardliners.”

But former ISI chief Gen Asad Durrani has a different point of view. “After no ‘ade­quate’ response to the Parliament attack, Mumbai or Pathankot, any response that could be seen as ‘befitting’ must have come as a big relief to the Indians.” He also does not attach much importance to the cancellation of the SAARC Summit and Pakistan’s ‘isolation’, pointing out how “hardly anyone lost any sleep over the cancellation”.

But he feels that in isolating the Pakistani prime minister, India has made a mistake. “In Nawaz Sharif, Modi lost his last supporter standing,” he says.

With both premiers spewing nationalism on either side of the border, this complex game might have more at stake for a longer time than a mere win or a loss.

As Drones Target The Baarat