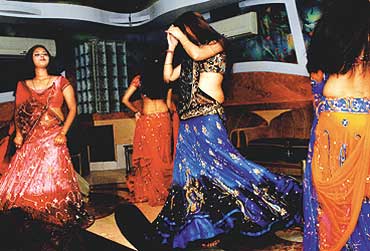 outlookindia.com
-0001-11-30T00:00:00+0553
Chandni could be part of any man's fantasy. As she bats her eyelids slowly to full dramatic effect and endlessly twirls in her orange and blue lehenga, she could be a film dream sequence. Except tonight she looks straight at the mirror as she dances. There are all of two men in the room and at least six other girls gyrating vigorously for their attention and money.

Harish Shetty, manager of Mayuri, Chandni's dance bar in suburban Bombay, sees only anaemic audiences for his bar's filmi song-dance-drink routine and is dreading a new ordinance that will effectively break Bombay's unique system of Bollywood dancing in bars, which could come into force next week. Recently, Kishore Shetty, whose family owned Mayuri for many years, rented it out and is trying his hand at graphic designing.

But Chandni and her colleagues only know the language of romantic gestures. They have always peddled fantasy to others at the dance bars but have been pushed prematurely into living grimy lives because of trafficking or family pressures. And with the Maharashtra assembly's ordinance breaking the drink-and-dance business model, these girls are at a new crossroad. Could they really get back to doing regular jobs or will they stay entangled in this murky web of work?

In Malwani, a far-flung suburb where many of the girls live, agents are doing the rounds of the gritty lanes where the girls spill out of houses that hug open drains and garbage dumps. Here the markets are filled with cosmetics and tailor shops, and clinics that advertise pregnancy tests and abortions. The agents want to take them to Bangalore, Nagpur or Aurangabad, where they will look for work at a dance bar or a high-end brothel. Others will accompany clients on holidays out of town for a few weeks.

For agents who take the girls to the Persian Gulf for a few months at higher salaries, this is boom time. One agent says he gets more inquiries than ever before from girls who want to go to the bars and brothels in the Gulf. Many now want to stay longer than the usual three-month stint. Excess supply also means agents now pay close to half of what they used to earlier.

In these times, the need to cling to a lover or a regular customer who could be their ticket out of a dance bar is even more acute. Soni's lover pays for her upkeep, so she has stopped dancing since the last few years and so has Shalu, but it has been 15 days since Asha has not heard from her customer-turned-lover, after she spent more than Rs 10,000 on him. She had hoped her gift of a new mobile phone would get her some love or loyalty, but it has been switched off since a fortnight. Every day, the girls go to work, thinking there might be love lurking somewhere. For a handful, there is, but for others, it is a gateway to a network of jobs that get shadier and murkier. 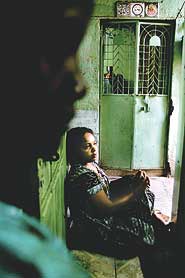 Asha, who lives with and supports her whole family, worked at a dance bar for five years before her parents realised she could earn more money if she worked as an escort. So she was at a Bangalore brothel for two months and now works at a "disco". Ruby was trafficked to a brothel before she went to work at a dance bar and is now at a "disco" too. Neetu is a delicate teenager from Kanpur, who came here a year ago because her father had an accident and could not work anymore. Now her whole family is here to ask why she has not been sending money for the last few months and Neetu doesn't know how to tell them she won't do so again. So, she plans to be a streetwalker along with the other dancers from her bar.

While some of the girls here are from traditional dancing families of North India, many come from as far away as Bengal and Bangladesh. They arrive as awkward teenagers, starting out at 14 or 15, and work till they are 30 or 35.But getting back to the regular life they almost never had is like a pipe dream. "Even some of the rich and well-known dancers sometimes end up in brothels after they get done," says Varsha Kale of the Bharatiya Bar Girls Association, which is representing the girls. The association says there are 75,000 bar girls in Bombay while the police pare down that number to 15,000. 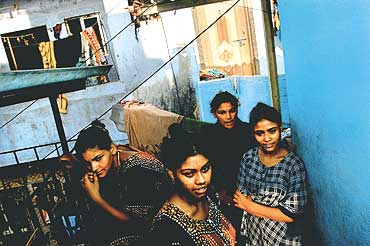 Prabha Desai's Sanmitra Trust is asking the Malwani girls if they would like some vocational classes now that the dance bar closure date is looming. Would the girls like to learn to apply mehendi, make papad, or teach dancing, or volunteer at the trust's clinic? But in house after house, there are nervous giggles. The girls are hoping the bars won't close down. Most say they don't want to take the classes because learning will take a few months, during which they will not earn and even later they will not get anything close to what they do now. They are acutely aware this is their only skill and also a well-paying one—upwards of Rs 10,000 a month that could go up to Rs 10,000 a day. "We have never done physical labour," says Soni. Rehana, a pudgy smiling bar girl from Calcutta, has been offered a job by the trust, but she is not taking it; she thinks the starting salary of Rs 1,000 is too low.

Kale says the Bar Girls Association also plans to work with the bar owners and institutions to teach the girls skills related to the bar business. She says they could learn embroidery, make snacks, toothpicks or napkins. For now, though, she is busy lobbying their case in the media, and the girls are watching their so-far hidden lives played out on national television. Some even ask for mikes before they start talking. They want to know which evening news they will be on.

Some of the richer women do want to open small businesses. Some have already bought houses, or educated their children at expensive boarding schools. Some of them have set up beauty parlours and other businesses. Veteran dancer Lata, whose husband is a steward in another bar, says they have saved some money and will set up a small business back in their village in Karnataka. People there don't know what Lata does in Bombay and this will be an opportunity to make a clean break and start life afresh.

But going back to their villages is an option very few girls consider. Paramjit went back home to Punjab where she had supported her family. But within weeks, she knew she would never get a job in her village that would pay her as well as bar dancing. She is now back in the bar. Returning home is also out of the question for most, because they have identification like ration cards that say they are bar girls, and their relatives will not exactly receive them with open arms.

So, if the dance bars do close down, they will be out on the streets. Literally, for a livelihood.