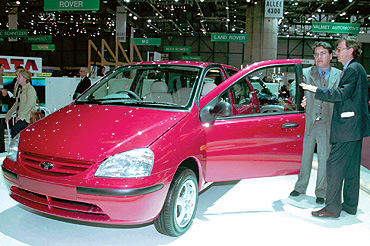 outlookindia.com
-0001-11-30T00:00:00+0553
Drive far, and get there fast—that doesn't sound like the Nano, in India or elsewhere. But get me to the other end of the city in good time, and you could be talking a lot of sales in India, and in a growing world outside looking for just that kind of car. Even if it hits roads abroad at a fair bit above $2,500. The future of the more-talked-about car in the world today rests really on a finetuning of a relation between expectation and price; you don't buy a Maruti and expect it to perform like a Merc. Even so, there isn't a car in the world waiting more to be test-driven than this one.

Nano's hope—and it is a hope that abounds abroad as much as in India—is the unformed international driving club that does not mind if a car gets from zero to 60 only eventually. And barring big-car America, a lot of the world moves, and likes to, in small cars. Europe has always had a thriving tradition of small cars like the Mini Cooper and the Fiat Cinquecento.

Some motoring experts think the Nano can only have a small market in Europe. "I think there is always room for cheap cars in Europe and cheap cars anywhere," says Dan Strong, motoring editor of Auto Express magazine in London. "Whether or not this specific car can succeed is another question. I think the UK market is very demanding and very sophisticated. We already have cheap cars in the form of used cars." The big promising markets could be China and Russia, he adds. While Tata Motors says exports of the Nano are two-three years away, there's already talk of jumping into the Chinese market.

As things stand, most of the cars India exports—dominated by Hyundai Motors and Maruti Suzuki—are small, compact models. On average, 60 per cent of the exports are for Europe and 40 per cent go to other countries, including African and Latin American. While Indian car exports to these markets are still very small—in South Africa, for example, India's car exports was a mere 2,080 units in 2006-07—the Nano's pricing can make it just the car for others aspiring across the developing world to move from two wheels to four.

Take Uganda, where the Tatas have an office already, and where Indians and Indian goods have some history. Capital Kampala has no public transport worth the name: the occasional bus is unreliable and overcrowded; then there's a Toyota Hiace kind of vehicle, less unreliable but even more overcrowded; and finally the Bada-Bada, the motorcycle taxi that takes a clinging passenger on the pillion. The Nano would squeeze in ideally into affordable space between a van and the motorcycle.

As in India, the Nano offers an upgrade across much of Africa from the two-wheeler, or even the emerging three-wheeler. Ajiri Namagembe, director of Ajiri Enterprises in Kampala, has been doing good business for years, selling motorcycles made in India. "The motorcycle sells for about $1,000, but at a price like the kind mentioned for the Nano, a lot of people here would like to buy a car instead," she told Outlook on phone. "This car really is a very good idea, and I would like to upgrade my business with a dealership for this car."

It helps that Africans love cars, perhaps more than Indians do. "The Indian thinks first of savings, a house and then a car," says Kampala businessman Rajesh Chaplot. "In Africa, almost everybody wants a car first." Sure, there is no car an African wants more than a road-conquering suv. For long, African countries have known typically the well-heeled official with a car like that, and on the other side, people with no car at all, and no hope of having one. But steady growth in East Africa has brought a new middle class looking for affordable little cars. Moreover, the Nano appears road-friendly—and much of Africa moves on regular roads that haven't made it to proper highway.

And no disrespect to the car, but it could mark a civilisation of the autorickshaw with a fourth wheel added on. Which means it could take the place of the three-wheelers emerging increasingly on Kenyan roads, says Riaz Khurji, a Nairobi IT businessman. "So many people starting to go for three-wheelers here could go for the Nano instead," he says. "A lot of people want low-cost, fuel-efficient cars, and I can see that many in my staff would want a car like the Nano. The roads in some places are pretty bad, and from what I see, the wheels of the Nano are pretty small, but this would be an excellent car for city use." And particularly for a city like Nairobi, which like Kampala, has little by way of public transportation to speak of.

The huge publicity over the Nano means it will have a ready and waiting band of buyers, Khurji says. "But Tata will still have some convincing to do. We had the Maruti car here that just failed, though the van did better. The car will have to convince people it is good enough for the normally rough road, and that it is reliable."

Much of Africa is promising, but Latin America might just be more so. Says R. Viswanathan, India's ambassador to Argentina, Uruguay and Paraguay, and an expert on Latin America: "There is scope for the Nano in Latin America, which has an emerging middle class. Public transport in these countries is bad and the railways is still emerging, forcing people to buy cars." The automobile industry in this continent is dominated by multinational automobile manufacturers, except the Japanese companies which operate from two manufacturing hubs in Mexico and Brazil. And while these companies make small cars, none of them can match the prices offered by Indian automobile companies, he adds.

Take a large market like Brazil. The Nano could be up against it in hilly Rio, but could be the perfect little car for the flatter and sprawling Sao Paulo. That city, with its population of 15 million or so, could be market enough for the Nano. Or, cities to the south like Porto Alegre. A great deal of car use in Brazil is local and around. In a country more than two-and-a-half times the size of India, not many people think of long inter-city travel by car. Brazil, however, does present peculiar demands, given its progressive use of fuel. Any car looking at the Brazilian market will need an engine that says yes to 'flexi-fuel', going by the widespread and growing use of ethanol as fuel. Tata will have to make friends with that technology.

The gross national income growth across Latin America is producing ever more of what entrepreneurs these days juicily call the teeming middle classes. And the Nano is quite the car for a new middle class heading from lower to middle. For that reason, the Nano "definitely has a chance in Chile", Matt Malinowski, editor of The Santiago Times told Outlook. "Auto sales in Chile (with 16 million population) were up 12 per cent last year. That trend has been consistent over the past few years." But Tata would have to do a fair bit of marketing. "People here are not very aware of products from India," he says. But again, in Chile, as in Brazil, the Nano could encounter terrain limitations.

The biggest roadblock on the road to exports will, inevitably, be taxes. And in Latin America, that could depend on any agreement India can sign with the Mercosur group (Brazil, Argentina, Uruguay and Paraguay; and possibly the Mercosur associate members—Bolivia, Chile, Colombia, Ecuador and Peru). "You would have to multiply that price tag of $2,500 by three to get to the car's retail value in Argentina," says Peter Johnson, business editor of the Buenos Aires Herald. "And that would take you to the mid-price range here, not the low end of the market. " That could change, he said, if India can sign an agreement with Mercosur to tag on a more attractive price.

Trade agreements could also be the key to opening up the ACP (African, Caribbean and Pacific) markets; these are a group of 80 small countries where distances and infrastructure levels mean these countries could have been designed for a car like this. These are little markets, but like itself, this car's market is about little bits adding up.

By Sanjay Suri in London with Arindam Mukherjee

A Sutlej Funeral I Can't Forget