Education has to be an inclusive idea in India. It is not now. 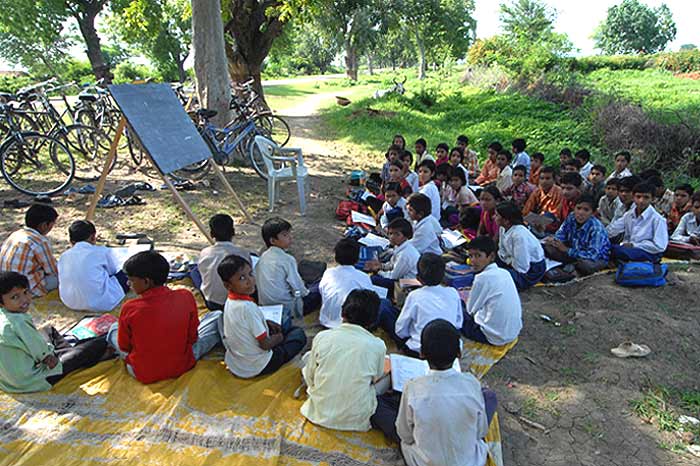 Bang! Bang! Bang! This is how Union HRD minister Kapil Sibal launched himself in his new role. With the announcement of scores of new plans, he appeared determined to infuse dynamism into our rotten educational system. Alas, the bubble has burst. The promised dawn of a new era is yet to arrive. Even the effort to build a national consensus on reforms has eluded the minister. The non-Congress states have refused to play ball.

As always, the goals of education remain nebulous. State funding is an old problem. The Kothari Commission had recommended 6 per cent of GDP in the 1960s, but this has yet to materialise despite the additional cess being levied. While the states contribute a fairly high proportion of their SDP to education (between 15-25 per cent), the Centre still provides less than 4 per cent of GDP. In comparison, the average expenditure on education in the OECD countries is 8-12 per cent GDP. Clearly, in India, we continue to pay a heavy price for the monumental neglect of our educational needs.

Decades have elapsed since Mahatma Gandhi alerted us to the fact that ‘our education has got to be revolutionised’. Sadly, we are not heading in that direction. Instead, some people are obsessed with the neo-liberal agenda. Unmindful of the real malaise which is both widespread and cuts at the root of the educational system, they debate issues which are peripheral to society. Thus, despite our high growth, we are stuck with an appallingly poor literacy rate. Surely, the concern in Lucknow and Patna is not the fate of overseas universities occupying our own spaces but paying adequate attention to our infrastructure, curriculum and teaching methods, and the system of examination. If we set these things right, our graduates will be educated and employable.

Quality education is different from catering to the whims and fancies of the burgeoning urban elites who, at any rate, have adequate resources to study overseas. One is reminded, once again, of Mahatma Gandhi who had said that the law itself was being used to serve the foreigner. Over 60 years after independence, we legislate to serve the interests of overseas universities at the cost of our own. Appalled, Gandhi would no doubt have repeated his own axiom: an education which does not teach us to discriminate between good and bad, to assimilate the one and eschew the other, is a misnomer.

Rhetoric apart, education must be viewed as a public good. The central issue in the Public-Private Partnership debate has to be the state’s commitment to welfare programmes for the marginalised, notably the Dalits, tribals and Muslims. And it must begin with our schools. As a growing economic power, we can ill-afford to lag behind any more. The Centre has to make this commitment. In addition, the ratio of Centre-state financing has to be on need-based criteria rather than on a blanket 50:50 for all states. Obviously, the educationally backward will require greater support from the Centre.

Education isn’t about catering to the elite. Gandhi would’ve balked at the idea of law serving the foreigner.

Howsoever much we may celebrate the entry of the corporate sector, the fact is that private partners, who are driven by the urge to maximise profits at everybody’s cost, have not demonstrated their ability to educate large numbers of school-going children from these sections. The government school system, on the other hand, still educates at least 50 per cent of our children at comparable levels. The performance and results of these schools have also markedly improved, although the Centre and state can do a great deal more to meet their requirements. So this has, in turn, started a reverse migration of students from private to government schools. In both these cases, classrooms have become more diverse with a healthy display of pluralism and multiculturalism.

Surely, Shastri Bhavan has every reason to harness the potential of government schools and transform them into the neighbourhood schools that have been the formula for success in nearly all developed nations. Believe me, there is no need to tilt the balance in favour of the private. Government-aided schools can and must coexist with privately-funded institutions. They do in, for example, the US. There is no reason why we cannot strike a similar balance in India. The SC ruling for Delhi is that 25 per cent seats in private schools must be reserved for children of weaker sections.

It is all very well to match international standards of quality in islands of the knowledge-based global economy, but let us not lose sight of our ground realities: the responsibility of the state towards the poor and the weak, an ideal envisaged by our founding fathers. We cannot take this challenge lightly or we risk widespread discontent in the future.

It is worth remembering that the developed world is investing heavily in education. We must do the same if we must keep pace with the changes taking place in the economy. This may appear to be a truism, but it needs reiteration in the present-day climate of political polarisation. After all, the Supreme Court has already stated that investing poorly in education is an ‘inversion of priorities.’ I hope policymakers will take note.

On the pathetic state of higher education, one is saddened to note that the political discourse of educational reform is still very heavily tilted towards the World Bank/IMF-initiated Structural Adjustment Programme and Social Safety Net of economic liberalisation policies. The answer to our problems does not lie in building black-and-white marble Taj Mahals, or ‘new’ institutions. Before we undertake another such venture, let us rebuild the existing ones. The universities of Lucknow, Patna and Calcutta, to mention just three, deserve special attention.

Improving falling academic standards is not dependent on changing rules of recruitment and examination procedures. One has to be both consistent and innovative in devising new strategies which would bring the best of talent into our colleges and universities. Secondly, federal-state relationships need to be reconstituted to provide better support for accomplishing democratic goals in education. Third, if centres of learning are to remain autonomous—and there is great merit in aspiring to be one—they should frame their own rules and regulations. Let them debate their future in consultation with teachers and students. Lastly, the Yashpal Committee report contains some sound ideas. It will be unfortunate if its recommendations are consigned to the dustbin of history.

The challenge before the hrd ministry is to weave a diverse citizenry into a healthy, multitudinous ‘whole’. This can be done only if the official understanding of knowledge and education is linked with an inclusive idea of India. We will then have some cause to celebrate the important exercise which began in May 2009. When that happens, we would want to forget the losses of 2010 and remember the gains in the coming year.

The author is director-general of National Archives of India