A patient, painstaking recreation of the tensile strength of Suu Kyi's story, leavened with admiration 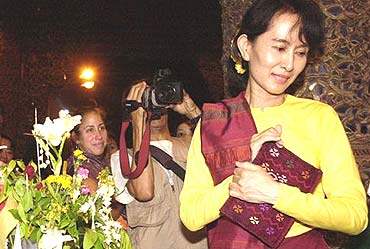 Perfect Hostage: A Life Of Aung San Suu Kyi
By Justin Wintle
Hutchinson Pages: 450; Rs: 548
In 1986, two years before she became the focus of national and international attention, Aung San Suu Kyi (henceforth Suu Kyi) and I had strolled in the Oxford Parks on a balmy spring evening, seamlessly moving from life with exasperating children to husbands, work and ageing mothers. The kinds of things women who have been through 25 years of bonding together talk about. But politics was nowhere on our agenda. Two decades later, Suu Kyi’s younger son, Kim, is the father of two, his own father is dead and his mother continues to be incarcerated in her once-beautiful home in Rangoon. Routine visa applications by Kim and older brother Alexander are equally routinely turned down by a military junta which rules a country that voted overwhelmingly for democracy in 1990, placing its faith in Suu Kyi.

The story of contemporary Burma is that of this unlikely leader, of an attractive, lively, articulate 40-plus mother who was looking forward to a life of writing and reflection—punctuated by visits to Rangoon to her ageing parent. It is one such visit to tend to her seriously ill mother in the summer of 1988 that found Suu Kyi caught in the maelstrom of a country in turmoil. A question that her friends have often asked is what would have happened if she had not been in Rangoon during those days? Would she have been beseeched to leave Oxford? Would she have agreed—or would some other leader have emerged? Valid thoughts, for over two decades ago, Suu Kyi was not innately political—though when unexpectedly, she had no option but to lead her country against the junta, she did so with panache and efficiency.

Over 450 pages, Justin Wintle unravels Suu Kyi’s life—an extremely tricky business when the subject is ‘unavailable’. Daughter of Aung San who had dealt/plotted/negotiated/with the Japanese, the Communists and the British for Burma’s independence from the latter in 1947, Suu Kyi was only two when, in the same year, her 32-year-old father, head of the provisional government and the country’s idol, was gunned down by a political rival. Soon, the competent Daw Khin Kyi, Aung San’s widow, was drawn into public service, and in 1960, came to India as Burma’s ambassador. A genteel young lady’s education was chalked out for Suu Kyi at the Convent of Jesus and Mary and the newly established Lady Shri Ram College for Women. Oxford followed as did Suu Kyi’s friendship with the Durham University student, Michael Aris, at the home of her unofficial guardians, the London-based Gore-Booths. When they decided to marry in 1972, Daw Khin Kyi was anything but pleased, though she mellowed subsequently. Tibetologist Michael and Suu Kyi shared interests in Buddhism, Bhutan and Aung San’s life—and a deep repugnance for the profligate General Ne Win’s military junta.

Justin Wintle provides the reader with the right degree of tension and excitement, recreating events, conversations and the dark underbelly of intrigue as Aung San Suu Kyi moves from her historic Shwedagon speech to the establishment of the National League for Democracy, months of campaigning and a stunning victory at the hustings in 1990. The junta’s response—house arrest for Burma’s undisputed new leader in July, for the next six years. And more was to come—untold violence, the Danubyu incident, the horror of Depayin and spells of house arrest. As expected, the author ends up a committed admirer—at times narrowly missing being an adulatory hagiographer, if not a sickly-sweet one: the birth of Aung San and Khin Kyi’s four children in rapid succession being "each a token of their parents’ deepening love for each other", and Suu Kyi’s delay in marrying attributed to her lack of readiness to "surrender her puritanical virginity". On the whole though, he does very well, avoiding prolixity with skill. The Perfect Hostage, Wintle alerts us, is today a pawn in the game of sanctions and international censure; committed to seeing her alive—albeit under house arrest—the world is careful not to overstep its mark with a merciless junta. Though the author’s research and interviews are convincing, there is occasional cause to be wary—when Netaji becomes Chandra Bose, and he writes of ‘President Nehru’ more than once! A detailed index, glossary, well-chosen photographs and further readings add value; there could have been a bit more discussion on Burma and present-day world opinion—including the chilling silence of India, coupled with its tacit admiration of a depredatory China.