The political turmoil within has become a threat to the state 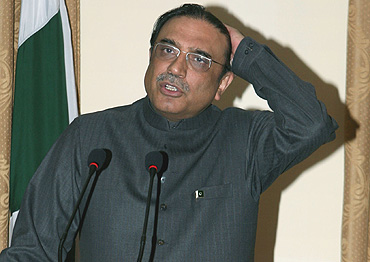 Other hands on the deck are not behaving very rationally either. Information minister Sherry Rehman, as is now well known, doesn't dither from sending smses on grave matters of national security; ISI chief Lt Gen Ahmad Shuja Pasha poured his heart out to a German publication; and Mahmud Ali Durrani claimed he was sacked as national security advisor because the prime minister wasn't in the national security loop. And then, as if to drive home this point, the British prime minister held a joint press conference with Zardari, bypassing Gilani in a brazen violation of protocol.

Even irrational conduct has logic, however flawed. Political commentator Nusrat Javeed explained it thus: "What you are seeing are the effects of a president emboldened by a dictator's insertion of Article 58-2B in the Constitution, courtesy the 17th amendment. Even a father will have differences working with his son under this article. The amendment gives the president the right to appoint the chief of army staff, the services chiefs, the provincial governors, and the chief election commissioner." To top it, Zardari also retains the right to dissolve the National Assembly and provincial assemblies.