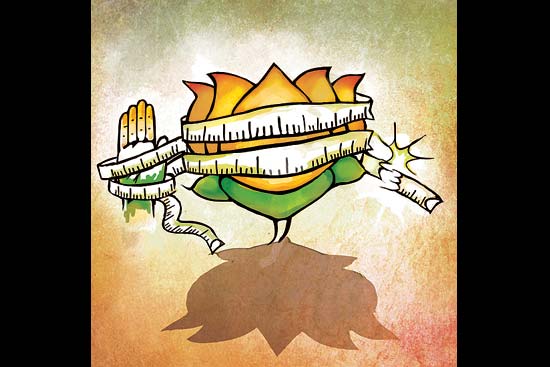 There’s a new F-word in the capital’s politicalscape. The recent cabinet expansion had the commentariat, even the gush media, wail about the Narendra Modi government going from fab to flab. What is it about the BJP and Super Size Me? No, it’s not about the expansion of the state but the expansion of the waistline—it’s the corpulence, not the opulence, of Hindutva hegemony.  The newly-inducted ministers are a breadroll call—from Sadhvi Niranjan Jyoti to Sujana Chowdary, Vishnudeo Sai to Dharmendra Pradhan.

Last fortnight Maharashtra’s first BJP chief minister, Dev­endra Fadnavis, walked into the party’s bariatric hall of fame. The 44-year-old now stands paunch to punch with Union minister Nitin Gadkari, and the government’s most influential minister, Arun Jaitley. The capital is abuzz with rumours that the ever-expanding party president Amit Shah is still undecided over the US or India for his stomach stapling. Another BJP belly buddy is Vinod Tawade, former Maharashtra leader of opp­osition, who followed Fadnavis for the laser zap. After a decade of Congress con­formity, of hollow socialist sparseness and povertarian exh­austion, it’s now about the binge twinge.

Consider this: even as the BJP’s pontifical head, the RSS, preaches sobriety and austerity, with vegetarianism and teetotalism, it’s only the Sangh’s oldest disciple, the 86-year-old frugalista L.K. Advani, who has stuck to the image of ideal pracharak; the rest of the leadership, from Vajpayee to M.M. Joshi, and the Sangh leadership too, from Mohan Bhagwat to Bhaiyyaji Joshi, are rotund and stocky. Then there’s the PM himself—Modi’s tailor has proudly declared to the world his master’s 45-inch waist, apart from the trumpeted 56-inch chest. Ministers Rajnath Singh, Venkaiah Naidu, Kalraj Mishra, Ravi Shankar Prasad are not particularly lean and gangly, nor are Union ministers Smriti Irani and Uma Bharti.

On the other hand, the socialist squad, from the Congress to the Left, and Mandalites in between, are about forced eclecticism and affected primness. Think Sonia Gandhi at the centre, and her faithful posse, where the women are finicky about being dainty and chichi with their fruit diets and water cleansing therapies (Ambika Soni, Girija Vyas, Rita Bahuguna, to Priya Dutt); the men are starchy and spiffy—Manmohan, Digvijay, Chidamabaram, Salman Khursheed, Manish Tiwari, Jitin Prasada, Sachin Pilot. Okay, Renuka Chowdhury and Jayanti Natarajan are channelling their inner thinness; Rahul Gandhi is rebelling the tyranny of the skinny; but there are the lefties, Prakash and Brinda Karat, with their bourgeois deprivation; the Mandalites—the Yadavs, both Mulayam and Laloo, and Nitish Kumar, following the Congress elites.

Is Hindutva fattening, and socialism slimming? Well, recent research shows that conservatives and liberals use different parts of the brain while processing emotions and decision-making, so are the eating persuasions of Hindutvavadis and socialists encoded in the structure of their brain? Or is it forced by a political style statement? It’s not an exact science but here are some damn good reasons that propel them to make different eating choices.

Imagine Nitin Gadkari in a Che Guevera T-shirt! Apparently, you can sin, if you are in bling. Who needs edgy ikkats and indigo linen when there’re  Bharatiya sanskriti-coded gota shervanis and sequined saris? Calories and inches go hand in hand in power dressing. Podgy is also the new orange. As the self-endorsed patent-holder of Hindu samskara, poor BJP leaders have to gorge on dozens of Hindu festivals. As for the heathen lefties, they can escape the calorie juggernaut; Sonia and her posse are mostly chasing Goji berries and Omega-boosting veggies, while poor BJP leaders have to quaff halwa and poha.

Forget chasing food fads like veganism; is it also lifestyle choices of the Congress-leftie that prevents them from bingeing? Do corrupting ideas like living-in, dou­ble income, child-free, feminist and male allies make them skinny? Are they gripped by loathing of the cellulite peeps? On the other hand, doctrinal Sangh soldiers smash such modern notions of liberty, waging wars like the Love Jehad to preserve and encourage ‘Indian belief systems’—of promoting the Ideal Woman, one who devotes herself to child-rearing, safeguards patriarchy, sacrifices her des­ires. Dieting is for women with loose morals.

There’s another freedom the Hindutvavadis enjoy, surely to the envy of the lib-socialists? Forget the phony, guilt-ridden moral rhetoric about equality and redistribution, the Hindutva brigade has no anxieties about climate change, ozone depletion, greenhouse emissions, carbon footprints either—it is the evil West yet again trying to keep us enslaved. We are about emancipation, not emaciation. The message to the Congressi-leftie miserabilists is clear—go get stuffed.