It falters initially, but then plays a sober hand on the Nanavati report shocker 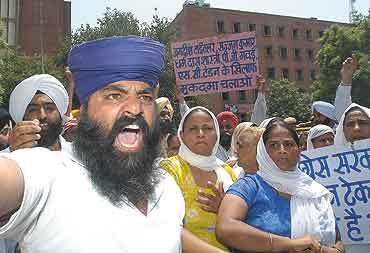 outlookindia.com
-0001-11-30T00:00:00+0553
At the end of the day, the Congress decided to play for the moral high ground—albeit only as a last resort. After 21 years, the party bowed to popular "sentiment" and "perception"—as PM Manmohan Singh put it—that some of its members were involved in the anti-Sikh carnage that followed Indira Gandhi’s assassination in 1984. The media onslaught on the Congress following the tabling of the Nanavati report on the riots and the government’s Action Taken Report (ATR) in Parliament galvanised a taken-by-surprise Left and a comatose BJP into protest mode that left the Congress with little choice but to compel two of its members to resign from the posts they were holding.

On August 10, minister of state for NRI affairs Jagdish Tytler resigned from the council of ministers. The following morning, party MP Sajjan Kumar quit as chairman of the Delhi Rural Development Board. As for the third key Congress leader against whom the Nanavati Commission has found "credible evidence", Dharam Dass Shastri, the government’s ATR had already acknowledged the need to take action.

The Congress leadership, which had not anticipated such a sharp reaction to the issue, faltered for a day and then got its act together. Indeed, the events of last week could well prove to be a blessing-in-disguise for the party. Not only has it got rid of some of the taint of 1984, with the turbaned figure of Manmohan Singh leading its charge for rehabilitation with polished speeches in Parliament, it could well enable the Congress to fight the BJP more effectively. Indeed, the resignations of Tytler and Sajjan could pave the way for demanding the resignation of Gujarat CM Narendra Modi—a figure far more important for the BJP than Tytler and Sajjan Kumar together are for the Congress. 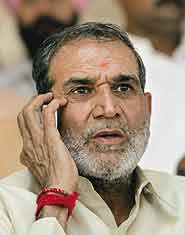 But on August 8, the picture in Parliament was very different. First came the CPI(M)’s official response, articulated by party MP Nilotpal Basu in Parliament House’s Room 53. Nilotpal adopted a cautious line, saying his party needed a couple of days to study the report before pronouncing on it. This briefing was followed almost immediately in the same room by the BJP’s press conference addressed by chief whip V.K. Malhotra. It became evident that the party intended only to make token noises. It was only one of the five issues discussed at the meeting of the party’s parliamentary wing that morning and even though it had decided to meet President A.P.J. Abdul Kalam on the issue and had sought the prime minister’s resignation, the tone was muted.

But by Tuesday, the mood had changed. Television channels and newspapers devoted considerable time and space to the Nanavati report. If news channels repeatedly showed demonstrations at Delhi’s Vikaspuri Chowk and black-and-white footage of the carnage, the newspapers interviewed victims and reprinted reports from 1984. In the morning, the CPI(M)’s parliamentary wing met and decided it needed to take a stronger line and demanded Tytler’s head. The BJP, caught between its desire not to refocus attention on Gujarat—which would be an inevitable fallout—but avoid yielding Opposition space to the Left, was soon goaded to jump into the fray.

If the Left and the BJP gradually calibrated its response Monday onwards, so did the Congress. On Monday, lulled by the lukewarm response of the Left as well as the BJP, the Congress was sure the matter would blow over. Also, intelligence reports suggested the Sikh protests in Delhi were oriented more towards seeking compensation, not revenge.

When the political affairs committee of the Congress’s parliamentary wing met on Monday to take stock, the consensus was against a defensive stance. A meeting of the party’s media committee, attended by Union home minister Shivraj Patil and I&B minister S.Jaipal Reddy, also decided to take a legalistic view of the Nanavati report and use its contradictions to justify the ATR.

On Tuesday, with the Left and BJP changing their tone, the Congress realised it needed to review its position. Union parliamentary affairs minister Ghulam Nabi Azad and defence minister Pranab Mukherjee hastily met Left leaders. At the daily briefing, spokesperson Anand Sharma said the Congress was "...a sensitive political party, a representative party." Asked what message the party was sending to the minorities, he retorted that the party needed no lessons in secularism and the fact that a Sikh was prime minister and another the army chief was ample proof that it was secular. 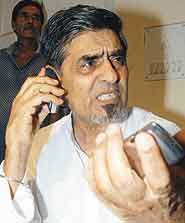 Finally, on Wednesday, it was left to the PM to set things right. In a moving speech in the Lok Sabha, he condemned what happened in 1984 and made the exit of Tytler & Co inevitable. Intervening in the debate on the adjournment motion moved by the NDA, he acknowledged the carnage was a "national shame" and "great human tragedy" and that his government would open up the cases referred to in the report. Most importantly, he promised he would focus on rehabilitation of the victims. It was a speech from the heart, as he quoted from the Guru Granth Sahib and made a plea for unity. Soon after, Tytler met Congress president Sonia Gandhi and handed over his resignation to her, an action which party loyalists stress is indicative of her behind-the-scenes role.

In the end, the Congress may have partly retrieved the situation, indeed, even gaining the upper hand over the BJP, especially since it was the latter’s effort in Parliament to insinuate, "Your 1984 cancels out our Gujarat". But the Congress would do well to draw some lessons. Tactically, it needs better political managers and it needs to take its coalition partners into confidence on potentially controversial issues so that it is not reduced to being reactive. Finally, it needs to take a more honest, long-term view on issues of high ethical salience. With the UPA’s honeymoon period over and elections due in Bihar, the Congress can’t afford to yield space to the Opposition on this.

1984 Anti-Sikh Riots: Victory To The Mob | By Khushwant Singh