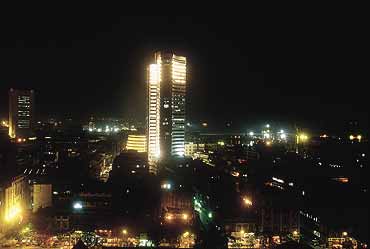 outlookindia.com
-0001-11-30T00:00:00+0553
After nearly a year's hiatus, businessman Deepak Parekh, 48, is back in the markets buying stocks, reasoning that the Sensex cannot go much lower. The alarm bells in the country's economy don't perturb Parekh: "The markets do not always move on economic performance." For him, the ghost of Big Bull Ketan Parekh has almost been buried.

A consultant at a big accounting firm, Ashutosh Thaker, 28, shied away from the markets for over 18 months. He's back acknowledging that fixed deposit interest rates are a problem at the current 8-9 per cent per annum. "I think that the inflation rate is around 6.5 per cent, so that leaves only 1 per cent real return," he says. Indeed, he regrets the fact that he didn't buy immediately after the September 11 attacks on wtc. But when Parliament was attacked, he was quick to seize the opportunity: "Over time, people forget these events but a company's cash flows remain the same."

At the height of the bull market and even long after that, many brokers were peddling stocks of all types to small investors like Dr Kancheti, 35. Investors like him made a lot of money, but on paper. His strategy was simple: buy what your broker recommends, they all seemed to be going up anyway. But what brokers failed to tell him was when to sell. He now looks at his situation as plain bad luck. And reasons that you just can't do without the market even if it's risky. So he too has returned. Though this time he hopes to sell at the right time.

The shoeshine boys are yet to dole out stock tips to their Dalal Street clients but with a 700-point rally catapulting the Sensex to the 3300 range, after ebbing to an eight-year low level of 2613 post-September 11, a palpable excitement is sweeping the markets. The Sensex spurted 200 points in barely three trading sessions post-Samvat 2058 and on December 6, it actually peaked at 3500—a 30 per cent jump from the jaundiced reality barely three months ago. The heat is on with both combined trades and volumes back to pre-rolling settlement days. In November, the combined number of trades on the Bombay Stock Exchange (BSE) and the National Stock Exchange (NSE) were 26,006,485, up from October's 24,059,818 while the volumes of shares traded have jumped to 42,092 lakh in November from 28,313 lakh in September.

D.R. Mehta, chairman of the Securities and Exchange Board of India (SEBI), confirms the upturn: "There is more liquidity in the market as an additional Rs 8,000 crore has moved in through mutual funds, foreign institutional investors (FIIs) and even investors who had made money in bonds."

With a series of calamities serially plaguing the market this year, at times this upswing may seem difficult to fathom but the bounceback was inevitable as most key benchmarks—from market capitalisation to gdp, price-earnings multiple and price-to-book volumes—had reached their nadir. Moreover, the slight pickup in rural demand, the improved corporate results coupled with some positive feedback trickling in from the disinvestment front and the good news about the oil pool account has bolstered the bullish sentiments.

Alok Vajpeyi, COO, DSP Merrill Lynch Investment Managers, feels that even with an attractive 15 per cent return of equities, the valuations in the equities market had hit rock bottom even though the interest rates have been half of what they were a decade ago. "The risk premium attached to equities was high," he says, but now the rate cuts have led to ample liquidity and low opportunity cost of capital leading to money getting parked in equities."The risk-reward ratio has improved considerably and unless we experience a drastic turnaround, a steep fall is unlikely," says Vajpeyi.

According to Sanjay Dutt of Quantum Securities, the lack of investment options has also fuelled the rally. "In the last nine months, domestic savings has all stacked up in debt. Some has to come to equity. With debt, bank deposits, even real estate not moving much, equities have become default asset class."

Such a churning of the market has also rekindled the hopes of the retail investor—the worst victim of this fiscal's capital market upheavals. He is back surfing the Net and checking webtools that provide live and dynamic feeds from the market, reading investment magazines, calling the brokerage to satiate his desire to play back. "The investors have been coming into the market. The number of trades in the market has increased, volumes are also going up and there's also a broadbased increase in the number of shareholders," says SEBI's Mehta.

"The best indications of the confidence come from the rise in the number of delivery-based trades and the increased risk appetite.... Simply put, the amount of money per trade has risen considerably," says Anup Bagchi, COO, ICICI Direct. Even the resistance to sell highlights the maturity of the retail investor. Equally impressive are the statistics. While at walletwatch.com, the growth in November over October has been 60-75 per cent, the page views in the markets channel of indiainfoline.com has surged by 40 per cent from mid-October, with maximum traffic heading for investment ideas, market commentary and company reports. The number of investment-related queries at iinvestor.com (a sister product of Outlook) has risen by more than 200 per cent in the last few weeks. Observes Krishan Mohan, head, business channels, sify. com: "The visitors to walletwatch.com are actually spending more time analysing past investment behaviour and seeking advisory service. Awareness is the buzz."

This ferment goes beyond cyberian euphoria to encompass even the brokerage firms. Says Motilal Oswal, chairman and managing director of Motilal Oswal Securities, "Our business has doubled in the last two months. Investors are no longer passive but are actually working on our buying recommendations." The picture is similarly rosy at Geojit Securities, experiencing a rapid surge in client base—from 1,300 in July to 2,300 in the December of 2001. "Examine the combined turnover of BSE and NSE, up from Rs 3,000 crore a day in July to Rs 4,500 crore on December 18, to gauge the popularity swing," says Satish Menon, the COO.

Equity funds are also showing positive signs with the net outflow from them being Rs 89 crore in October while that in November has been only Rs 6 crore. Says Rajiv Bajaj, managing director, Bajaj Capital: "From October, we have seen a 50 per cent jump in the equity fund sale. Equity mutual funds were dormant till October. But now even seasonal investors are showing interest."

So they are back again, the small investors, but the question is, what would be their fates this time round, lemming or phoenix? The pictures may seem very positive but there are some unhealthy pointers.

The Sensex rally has come as a bonanza for investors in new economy stocks. While the Sensex rose 4.9 per cent from 3275 on December 3 to 3436 on December 7, it has been enough to add over Rs 16,000 crore or 14 per cent in the market cap of the 250 actively traded new economy stocks including 200 information technology, 31 media and 19 telecom stocks. And heavy fund buying and speculation is said to be responsible for the technology rally which has had its ripple effect on other old economy counters. The last few months, especially since the September 11 events, have been sluggish for the Indian stockmarket so far as FII presence is concerned. During September this year, FIIs were net sellers for Rs 416 crore. While they had turned buyers during October, making total purchases of Rs 716 crore, their activity slowed down considerably in November as they made total purchases of only Rs 51 crore during the month.

Says Samir Arora, chief investment officer, Alliance Capital: "We believe that small investors should stay away from small stocks for these are for big speculators only. Small stocks are much more difficult to analyse for there is less information, less history and lower sustainability of their business models generally. It is possible that some small stocks give huge returns as they develop and become big companies but it is not easy to know which of the small companies is real and which is rigged." According to him, in the bear market of 2000-01, investors in small technology stocks lost much more than they did in technology funds.

What is even more worrisome is that the K-10 scrips are showing drastic growth, outperforming the market indices by a whopping 350 per cent. It's dangerous considering they are highly volatile shares and could go down as fast, as experience has shown. The surge in K-10 stocks since October and early December has been backed by huge volumes. The combined volumes of the K-10 stocks in the last two months on the BSE and NSE account for 40 per cent of the traded volume in these exchanges. But the current rally looks deeper in volume terms than the earlier 2000 rally. For example, Aftek Infosys recorded an appreciation of over 125 per cent and an increase in volumes of a whopping 732 per cent since early October. HFCL on the other hand notched up a 204 per cent gain on the back of a phenomenal 4,325 per cent increase in volumes. "The rise in volumes is clearly speculative.... People are already saddled with K-10 scrips. This appreciation gives them an opportunity to offload their holdings," says a Calcutta-based market analyst. Agrees Mehta: "Along with retail investors, the speculators have also come in. But that's the fact of the market and you cannot avoid that."

The buck doesn't stop there. The heightened cross-border tensions after the attacks on the Indian Parliament have also compounded the problem, raising uncertainties. Nobody wants a war at the cost of draining the exchequer. But the fluid situation doesn't help either with volatility increasing in the markets. "Unless a clearer picture arises, the state of flux will act as a slow poison on the markets," feels Bagchi. "A war-like situation will add to the economic mess and finally affect FDI inflows," says Nimish Shah, CEO, Parag Parikh Securities, adding, "Even our somewhat salvaged oil economy will go completely haywire." But some are more optimistic. John Band, CEO of ASK Raymond James, says, "India has laboured to improve its ties with the US, which it won't jeopardise with strikes on Pakistan. Thus, expect more loud talk than loud bangs."

Clearly, these are uncertain times. And the small investor has to take responsibility for his actions. Caution should be the watchword.