Caught In A Tango 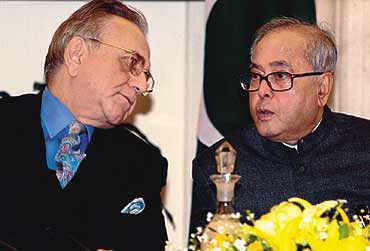 outlookindia.com
-0001-11-30T00:00:00+0553
Soon after the firebombing of the Delhi-Attari Express (link train of the Samjhauta Express), two assertions appeared in the media: first, that the Lashkar-e-Toiba (LeT) was behind the blast; second, a call had been been traced to Pakistan-occupied Kashmir soon after the blow-up. These two nuggets were predictably designed to suggest a Pakistani hand behind the bombing even before the probe had begun in earnest. Yet, during the media interaction at Delhi's Hyderabad House, the reaction of foreign minister Pranab Mukherjee—flanked by his Pakistani counterpart Khurshid Mahmud Kasuri—to a Pakistani journalist's query on the LeT angle was guarded. Pranab said, "It would not be possible to conjecture anything unless the (investigative) process is complete. At the Islamabad meeting, the information will be shared with authorities there."

The Islamabad meeting Pranab was referring to, slated for March 6, will be the first such of the joint anti-terror mechanism, set up with much fanfare at the Havana summit between PM Manmohan Singh and President Pervez Musharraf last September. Ironically, the mechanism had been predisposed to elicit Pakistan's response on evidence of involvement of its citizens in the blasts that periodically rock India. Most of these cases invariably find Indian leaders claiming to possess "credible evidence" about Pakistan fomenting terror attacks.

Post the Attari Express blast, senior government officials say "the entire context of the joint mechanism has changed...India has been put in the predicament of now having to explain to Pakistan how its citizens lost their lives in India". The shoe is clearly on the other foot. In the public battle for hearts and minds, India would now have to provide a progress report on the blast investigations, thereby allowing Pakistan to exploit a huge window of unexpected opportunity. Officials will now have to tread on eggshells.

In fact, the Pakistan National Assembly in a unanimously adopted government-sponsored resolution called for the formation of a joint Pakistan-India investigation team for the probe. Asked if this was going to be the case, Pranab fended it off saying that as per the law of the land, India will conduct the probe and share the findings with Pakistan.

Barely ten days before the March 6 meeting, the government is yet to decide what it is they will be taking to the table. This decision will now be taken closer to the date of the meeting. The challenge, say officials, is to make the mechanism work, despite a widespread belief in the higher echelons of power that it isn't conceptually possible for Indian and Pakistan intelligence agencies, usually at daggers drawn, to cooperate and work in tandem. Even Manmohan had tersely remarked after the Havana meet, "I hope it works. But if it doesn't, then also we'll have to deal with the consequences."

Senior government officials say they won't be surprised if the Pakistani team brings a list of grievances and accusations to the March 6 meeting. The list could include charges of India fuelling the strife in Balochistan and Sindh, one that has often been stated loudly and vehemently in Pakistan. Considering the mutual feelings of suspicion and the enormous scope for the joint mechanism degenerating into a farce, senior officials are convinced that progress, if any, will be confined to securing reasonable, non-emotive ways of regularly exchanging information. It's still not clear if the mechanism is capable of yielding anything but anodyne counter-terrorism steps that will in no way bring down the frequency of blasts in India. Another two or three blasts and the mechanism, fear officials, will lie in shreds and "fall by the wayside".

The only silver lining is that the officials managing the joint exercise—Tariq Usman Haider from Pakistan and K. C. Singh from India—have already delivered one document, after a year of negotiations: the nuclear risk reduction agreement that was signed during Kasuri's visit last week.