Caught by the Turn

If spin can win matches for India, it can for the Aussies too 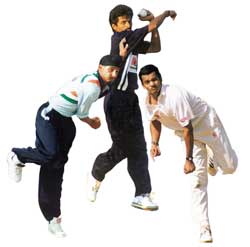 outlookindia.com
-0001-11-30T00:00:00+0553
That spinners would lead the feeble Indian bowling attack in the upcoming series against Australia was a foregone conclusion. Last week, the team management simply vetted it. The result: as many as seven specialist spinners have been named among the 25 probables for the conditioning camp which kicked off in Chennai this week ahead of the series.

The bad news, of course, is that India's only strike spinner, Anil Kumble, will be unavailable, nursing an injury. Desperately seeking spinners, the selectors, after watching almost all the Duleep Trophy games, have now picked on a motley group of tweakers: Rahul Sanghvi, Murali Karthik, Sharandeep Singh, Harbhajan Singh, Balaji Rao, Sunil Joshi and Venkatapathy Raju—all of whom bowled well on the placid tracks on which the Duleep games were played.

Apart from Raju, Joshi and Punjab off-spinner Harbhajan Singh, India has picked a bunch of rookie spinners, two of whom—left-armer Sanghvi and leg-spinner Balaji Rao—have no Test experience. Punjab off-spinner Sharandeep Singh made his Test debut in Nagpur against Zimbabwe last year while left-arm spinner Karthik has played four Tests after his debut against South Africa in Mumbai in 1999-2000.

On the other hand, Harbhajan's career took off well after his debut against Australia in Bangalore in 1997-98. But trouble struck when he was called for chucking and had to undergo a rehabilitation programme. Since then the young spinner has struggled to return to the national team. He has a decent Test record (21 wickets from 8 Tests) and has the best chance to make the Indian eleven.

The surprise in the pack is Balaji Rao. Former paceman and mrf Pace Academy instructor T.A. Sekhar mooted this 22-year-old Chennai-born leg-spinner's name during the selection meeting. Although Rao had represented junior India, his name hardly made any impact with other selectors. Neither chairman Chandu Borde nor skipper Saurav Ganguly were familiar with his bowling. Still, Rao was inducted because Ganguly wanted "to have a look at whatever spin material was available at the moment."

But making a definitive comeback in the Indian squad is Raju. Also coming back to the team is Delhi's Sanghvi. But when the selectors shortlist the 14 for the first Test in Mumbai, Raju will have a clear edge over the likes of Sanghvi and Railways' Karthik. Reason: Raju was the second highest wicket-taker (with seven wickets) when Aussies played in India last. "I was never a match-winning bowler. I was always a support bowler to Kumble," says Raju. "But now my role will change if I am selected. I'll have to attack and fill the gap Kumble has left." He also has a dream—to reach the magical 100 Test wicket mark. He's just eight short of this personal landmark. "I never gave up hope. Last season I got 52 wickets in the domestic circuit and I am in good form this year," says the Hyderabad-based bowler. Clearly, the selectors feel that turning tracks would be the best bet against Steve Waugh's marauding Australians. With Glenn McGrath, Jason Gillespie and probably Brett Lee up his sleeve, Waugh wants to beat India with pace rather than spin. And, of course, this lethal game plan makes perfect sense.

But the fact remains that India is as susceptible to quality spin bowling as they are to hostile pace. Even as Indians are bred on turning tracks, they still look vulnerable in front of top-class spin. Remember how Muttiah Muralitharan (seven for 30) taught the Indian line-up a lesson in Sharjah in October last year? Or when Warne troubled Rahul Dravid during India's series Down Under in 1999-2000, dismissing him twice, for 35 and six, in the first Test.Dravid, however, did hit a ton on a turning wicket for Kent in 2000.

And Waugh will also surely note that spin is the best way to beat Indians at home. At least record-books suggest that most teams who've won in India had a strong spin attack.

With Kumble rendered hors de combat, an Australian side that includes both Warne and Stuart MacGill will have a far superior spin attack. Groundsmen at Test venues must be additionally careful while preparing turning wickets. The tracks must not afford bounce because Warne would then trouble most Indian batsmen with his ability to extract lift and movement at the same time. Clearly, if spin will win, it surely will—for the Aussies too.