Cats Are The New Dogs

Independent and fashionable. The Cheshire cat can barely wipe his grin. 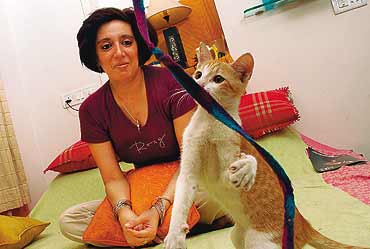 It's all about being low maintenance these days. Even in relationships, if you're busy and working, most people simply do not want the hassle of looking after something or someone more than you would look after yourself. Although, it's not entirely as selfish as it sounds—at the end of the day, you still want to return to something to assure yourself you're not all alone in this world. Plants aren't good enough. Goldfish die if you look at them. An increasingly popular solution for today's young professionals in India is, therefore, a cat. About ten years ago, cats we saw were mostly strays, who wandered off the roads and hung around kind homes to be fed about once a day. But if people were going to get a pet, they got a dog. Not anymore. An increasing number of people over the last couple of years have opted for cats as pets, because they demand so little of their owner—you don't have to walk a cat, bathe it, or keep it company and yet you have the pleasure of keeping a pet at home. And they're especially suitable pets if you're living in tiny apartments, sans full-time domestic help, as many young urban professionals are today. Observes Delhi vet Dr Samar Mahendran, "A few years ago, I hardly saw any pet cats in Delhi but now they form 25 per cent of my practice." Dr Sanjeev Rajadhyaksha, a Mumbai vet, thinks the growing popularity of cats is "a sign of a developing economy. The more young professionals there are in a country, the more people who work hard, and still want a pet animal. Dogs need too much attention, so cats are the best bet."

Reflecting the increase in the number of cat owners is the sudden proliferation of cat products available in the market. On a visit to a Mumbai pet shop, we found not only a range of cat and kitten foods but also an entire basket of cat toys—from catnip mice to clockwork mice and chew toys, all labelled separately from the dog items—as well as other fancy products, just for cats. Rupali Arte, who works in a gaming company and has two cats—a Persian and a Norwegian forest cat—points out two different types of scented litter as well as a litter box and a deodoriser, all freely available now in pet stores. "When I got Sasha (the Persian cat) seven years ago, I had to ask people to get me all the things I needed from abroad. But in the last two years, most things are available in the Indian market."

Confirms Delhi-based writer and cat-lover Nilanjana Roy, "Ten years ago, cat food, cat toys and cat litter were impossible to find—the litter had to be home-made, and I'll spare you the very messy details! Our first cat, Mara, was brought home in a red plastic vegetable-basket-turned-cat-carrier, because proper cat travelling cages—an absolute necessity for vet visits, house moves, journeys etc—were not available. It's been much easier bringing up our other two cats, aged four and two respectively. They're post-liberalisation, new economy billis. Mara, poor thing, was a child of the licence raj and closed markets. "

In Mumbai's Crawford Market, there is a section that sells cats (and dogs) of exotic breeds. It's an illegal operation and the animals are kept in terrible conditions, but it persists because it meets a growing demand. Arte's Norwegian forest cat was part of a litter from a mother cat who was rescued from Crawford Market. "I grew up with dogs," Arte says, "but now I'm more comfortable around cats. In some ways, my cats are just like me, they like only so much affection." Travelling is never a problem, says Arte, because she transports both cats to her parents' house nearby, or simply leaves them with her flatmate, with instructions to leave food and water out for them every day. Other cat owners Outlook spoke to echo these views as they wax eloquent on why they prefer cats to dogs—because they don't grovel and beg for affection, because they are proud and independent and like to establish a relationship of equality with their owners. And also because just watching their antics and their feline grace gives cat owners hours of pleasure. I own thirteen Persian cats. I've had them for the past 18 years. My wife and I used to keep them at home but then I opened Magazines, and one day I brought them over. The moment they entered, the customers went crazy for them. Now you could say that out of the 1,000 people who enter the shop everyday, at least 500 come just for the cats. They're celebrities around here. When I take one or two back to the house, just for a change, people ask me, hey, where's Motu, or Tommy? A while ago, management students who came down thought it was a marketing gimmick, they said it was brilliant.

Of course, Mumbai being a coastal city, the availability of fish ensures there are more stray cats than in any other Indian metro. There is even a breed called the Bombay cat, currently priced at about $400, which is all black with green eyes. But it's not just because of the fish, says chief functionary of PETA India, Anuradha Sawhney, "People get cats from breeders as a fashion accessory, and then they don't get them spayed or neutered, so they are overrun with kittens." These are promptly dumped at one of the city's several fish markets, where they may or may not be picked up by those looking to adopt a pet kitten.

Nilanjana cautions that adopting a stray kitten is not to be undertaken lightly: "While we'll look after a cat in trouble, we no longer feed street cats unless we are sure we can take full responsibility for the animal—get them their regular shots, get them neutered, see they have love, a home, some comfort. If you can't guarantee that, you end up conditioning an animal to expect some care, and then abandoning them, and that is heartbreaking," she points out.

Meanwhile, the tribe of pampered pet cats grows and grows in every metro in the country, especially sought after by busy professionals living in apartments and working couples without children. Sawhney herself is one of them, and she has six cats. Like most cat owners, she's discovering kittens are very much like potato chips—you can't have just one.

By Meenakshi Reddy Madhavan with Raghu Karnad in Delhi