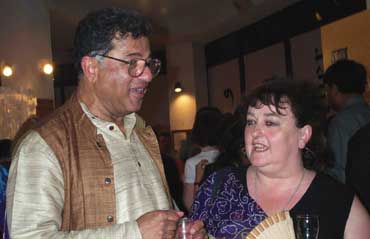 The play, inspired by Somadeva Suri’s Yashastilaka written in 950 AD, centres on the Jain abhorrence of violence in any form—particularly of value-less blood sacrifices. No sharper parallel seems likely at this juncture with the Indo-Pakistan conflict. As in the ancient tale, Karnad’s play deals with the story of a king, his queen and the queen mother, but now also joined by a lowly mahout.

The play opens with the mahout and the queen in a temple courtyard after a sexual interlude. The mahout, who has a lovely singing voice, has roused the queen from her lord’s side and drawn her to the temple. They are surprised by the king who has followed his wife out of the palace and has heard the sighs and groans of love, not once but twice. But the king does not, in the style of all epics, instantly run his wife through with a sword. For one thing, he has been converted to Jainism by her and, more importantly, he is not carrying a sword. He also happens to care deeply for her. She has so far not borne him a child and has already had a miscarriage.