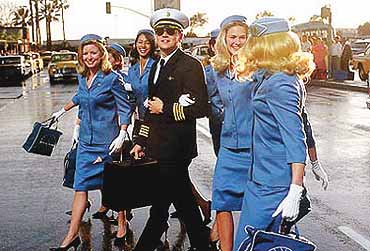 The elegant, animated credit titles of Catch Me If You Can hold the promise of a sprightly caper. So does the plot, which is all about one American Natwarlal of the '60s—a young conman called Frank Abagnale Junior (Leo)—who was pursued right across the country, and all the way to France, by fbi agent Carl Hanratty (Hanks) even as he kept switching identities, from an airline pilot to a paediatrician to an attorney general. Forging cheques and charming the society ladies, Abagnale amassed a million dollar fortune, all before he turned 19.

Spielberg's directorial flourish is evident—there are these interesting little details that he weaves lightly into the narrative, like Abagnale's habit of collecting bottle wrappers and his obsession with the Flash comics hero Barry Ellen. The period feel is wonderfully recreated in muted blues and greys through Janusz Kaminski's camera and the music plays in tune with the times. Leo looks achingly kiddish and smashingly beautiful, Hanks is suitably dour but it's Walken who's an absolute knockout as Abagnale Sr, the length of his role notwithstanding. However, Catch Me... doesn't quite find Spielberg taking a genuine break for some fun and games. It's neither a stylish Bond movie nor a jokey Pink Panther. All because, more than the exciting adventures and escapades, Spielberg decides to dwell on the age-old, and oh-so-utterly stodgy American family values. Abagnale's compulsions are traced back to a dysfunctional family and his father's tax problems and humiliations. It's when he is made to choose between his dad or his mom ("It's not a test, there's no wrong answer here," says the lawyer rather unfeelingly) that he's forced to break loose. Even then the constant buzzword for him is to "go home" but he has "no one to call". So his equation with Hanratty also becomes that of two lonely souls seeking emotional support than indulging in a smart game of one-upmanship. Hanratty almost becomes Abagnale's surrogate dad and he calls a truce with the agent by asking him to "let me home". In return, Hanratty rehabilitates Abagnale within the fbi fold—he is given charge of identifying other forgery cases. And all's well if it ends with a reassertion of the great American Dream.

If Catch Me... doesn't live up to its name, it's because a possibly exciting cat-and-mouse chase gets heavily bogged down by soppy, soapy sentimentality. That's as mawkish as the TV talk show, To Tell The Truth, that the film starts off with. With Spielberg, you do get a cinematic champagne, but one that's not bubbly enough. A hugely watchable film that disappoints nonetheless.