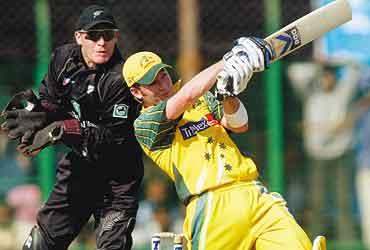 outlookindia.com
-0001-11-30T00:00:00+0553
After playing two games each against India and New Zealand in the TVS Cup, I must admit that I am struck by the difference in the conditions at Gwalior and Mumbai, where we played India, and at Faridabad and Pune, where we were up against the Kiwis. The pitches in Gwalior and Mumbai were extremely dry, especially the latter, which started to turn in the second over of the match itself. It got progressively drier, slower and lower, and I was proud that our batsmen managed to master the conditions and post a big total on that wicket. In Faridabad and Pune, we were lucky not to have to bat first in conditions that were loaded in favour of the bowlers. To make life even tougher for the batsmen, the games started at 9 am, when the moisture in the air made the ball swing prodigiously at the start, only to ease out as the sun came out.

Seeing venues like Faridabad and Pune does not surprise me because I can see why such pitches are being made in India. I'm sure extra grass has been left on these tracks so that Indian batsmen learn to play on such wickets at the domestic level. I'm told that the state of pitches in India has been a hotly debated topic for many years, so these wickets must have been created to arm Indian batsmen with the ability to play on such tracks when they travel abroad. While this is the obvious reason, there is some irony in the fact that we seem to run into the Kiwis and not the Indians on such tracks.

Coming back to the Mumbai game, it was great to see our middle-order take charge of the game, and Marto was particularly brilliant on a wicket where strokeplay was not very easy. In my last article, I had said that we would have to change our strategy against the Indian spinners, and our mix of caution and aggression enabled us to see them off without much trouble, even though the pitch was helping them. The Indians too played extremely well to be up for the chase right till the time Sachin Tendulkar and Rahul Dravid got out in quick succession. After that, our bowlers ensured that we closed out the game.

Armed with a bonus point, we moved on to Pune where I was lucky to win a crucial toss which enabled us to make full use of an early start on a lively wicket. While we did finally manage to win at Pune, there remain some areas which need to be ironed out before we enter the next phase of the tournament. I was disappointed that our bowlers let the Kiwis off the hook after they were 20-odd for four. Our bowling was not as disciplined as I would have liked it to be. Thirty-three wides is simply unacceptable and it was a clear reflection of the fact that our bowlers did not have much control on the ball. While some of those wides could be attributed to the fact that we were bowling in seaming conditions, 33 is way too high.

The New Zealanders have not done too much wrong so far, and seem to be a little out of luck. I thought they fought back tremendously to reach 250-plus after a bad start at Pune, thanks to Jacob Oram, who was truly outstanding. Fortunately for us, the pitch had eased out when we started our chase, and the lightning-quick outfield ensured that our run-rate was always healthy. We basically focused on building partnerships, and with the help of Michael Clarke, Michael Bevan and Andrew Symonds we did just enough to get through.

The player who shone right through the week was young Michael Clarke. Ever since he played in the West Indies earlier this year, he has impressed his teammates as well as experts with his talent, maturity and aggression. Mark my words, this lad will go a long way, and will play an important role in the future of Australian cricket. He proved his usefulness as a left-arm off-spin bowler when he chipped in with three crucial wickets in Mumbai, including the Big One, Sachin Tendulkar.In Pune, he came in to bat at a difficult situation but kept his nerve to make a very important contribution. The other Michael (Bevan) was at the other end, and as usual, he ensured that we were out of the slightly tough spot we had gotten into when I was bowled.

I still have not got as many runs as I would like in this tournament, and with only three games to go, it's about time I got my act together. I'm working towards a good contribution in the next couple of games.

The Indians are looking good, with their batting mainstay Tendulkar having scored well in all three games. I won't say he's playing as well as I have seen him, but as usual, Tendulkar seems to be saving his best for the games against us. His century in Gwalior was impressive, but he was not as free-flowing in Mumbai. Having said that, the Wankhede pitch was not an easy one to play on, and till he was there, we knew that India were in with a chance. Bangalore is another ground where Tendulkar has a couple of 100s, so we would be eager to see him off as early as possible.

We had a five-day break after the Pune game, so we decided to stay in Delhi before flying to Guwahati. It's been a relaxed time for us with only a few gym sessions on the agenda. There were no nets and cricket, so everyone was allowed to recover after the rigours of playing four one-dayers in 10 days.

I caught up with a few Australians who live in Delhi to watch the Melbourne Cup at a hotel next to ours. The Melbourne Cup is the biggest race in Australia, and it was amazing that we got to catch it live in Delhi. Being a racing enthusiast, I could not have asked for a bigger treat during our stopover at the capital city.

When we came to India, we had planned to give all the members of the squad a game, especially if we qualified for the finals with a few games to spare. Michael Kasprowicz has been injured for the last two weeks, so fitness permitting, he will play at Guwahati on Sunday. Jimmy Maher has also not got a game so far, so he too will be pressed into action. When a team gets into a winning habit, it's difficult to change the team, but I feel it's important that all players get a chance to play when on tour.

I am told that since Guwahati is in the east, the match against New Zealand will begin at 8.30 am. It's going to be a tough call for the team batting first once again, and if I call right at the toss, it will be a big relief for our batsmen. It's sad when so much rides on a coin, but with such early starts scheduled, that was bound to be the case.