The fine print may hold it up, but an anti-graft bill is on its way 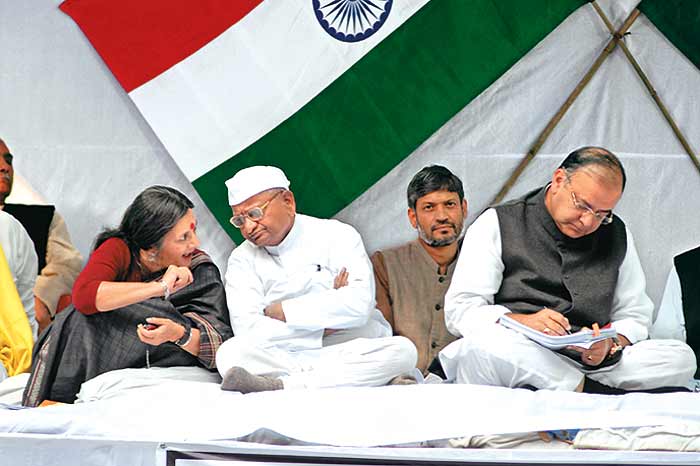 “It is ironical, and even somewhat paradoxical, that corruption, an issue as old as mankind, can generate so much contemporary debate, and ignite large volumes of both light and heat.”

—The 48th Report on the Lokpal Bill, 2011,
of the parliamentary standing committee
on personnel, public grievances, law and justice

And so it rained bills this week. In the backdrop of another call for a sustained agitation by anti-corruption crusader Anna Hazare, when the Union cabinet met on December 13, it cleared three draft bills to fight corruption—for a citizens’ charter, a grievance redressal mechanism and for the protection of whistleblowers. A fourth bill, on food security, was put on hold.

With assembly elections in seven states next year, most of them crucial to the Congress, the UPA is evidently in a hurry to clear a slew of bills, and especially to claim authorship of bills to tackle corruption. The urgency on display gave rise to hopes that the government was serious about dealing with corruption on a broad front, even if only to minimise the damage from Anna’s agitation.

The next day, on December 14, some doubts crept back in. The all-party meeting called by Prime Minister Manmohan Singh saw more tactical play than consensus—and no showing of cards by the government. On December 15, a broad understanding was in evidence: the Lokpal, an 11-member body, would be empowered to investigate the prime minister, but with safeguards for matters of national security; 57 lakh government employees, including Group C and D staff, would come under its purview; and the CBI, which will remain autonomous of government control, will be answerable to the Lokpal only on cases the Lokpal assigns it. A December 18 meeting of the cabinet will be crucial, for there are indications a cabinet note will be readied in the light of what political parties have to say. At the time of going to print, there was a vague commitment to bringing the bill during the winter session—amid tentative talk of sitting beyond December 22 if needed—though December 20 was offered as a “likely” date for the event.

There is, indeed, a case for rigorous discussion of the multi-faceted blight of corruption and how to discourage it in a democracy without creating strong-arm institutions. The problem is, it has gone on for months—since the Anna campaign—without result. Politically, the mood is in favour of waiting: except for the BJP, the main opposition party, and the BSP, which insist on a legislation in the current session, the others—the JD(U), RJD, BJD, DMK, TMC—are against haste. Sharad Yadav of the JD(U), who is also the NDA convenor, says, “Let’s not bring this legislation in haste.” The Left wants to debate the bill thoroughly in Parliament. Sitaram Yechury of the CPI(M) wants the three new anti-graft bills referred to a standing committee.

Aware of Anna’s hold over the middle class, and sniffing an opportunity to slight the UPA, opposition leaders ‘united’.

At the level of public perception, though, there are compelling factors that impinge on the political: should Parliament fail to legislate on Lokpal in this session, Anna has threatened a sustained agitation December 27 onwards (Mumbai being the tentative venue), besides calling for a ‘jail bharo’ from January 1. But the provocation that the Congress is unable to countenance, and which set off the recent flurry of cabinet-level activity, was Anna’s attack on Rahul Gandhi. On December 11, Anna blamed Rahul for all that went wrong with his dream of a strong Lokpal. Sources in Anna’s team say Rahul was targeted because it was he, more than Manmohan and his cabinet, who seemed to be calling the shots. Of all the recommendations of the standing committee that looked at the Lokpal issue, it was Rahul’s suggestion that the Lokpal be accorded constitutional status—a “game-changer” suggestion, as he called it—that came to be foregrounded in the draft bill. A miffed Anna and his team—whose two agitations on the issue were, by common consensus, the prime driver in creating an anti-graft legislation—naturally took the line that Rahul was the ghost author of this weak draft that evaded the issues it held to be vital.

Back in April, when Anna had laid siege to Jantar Mantar, it was not just the UPA, but all politicians—with their lack of commitment to fighting corruption—who were suspect in the eyes of the anti-corruption movement. But much of the opprobrium was reserved for the government, mired as it was in scam after scam those days. After dithering for over a week, it agreed to a ‘bhagidari’ for drafting a strong Lokpal bill, but the partnership ended in rancour and distrust. Another agitation was launched, this time at the Ramlila grounds; after Anna’s 11-day fast, Parliament committed itself to evolving a strong Lokpal mechanism.

So what has changed between April and December? On December 11, all parties except those in the UPA acquitted themselves, in a way, on the trust-deficit front, joining Anna, at his invitation, on a common platform at Jantar Mantar. It made for an unusual picture—Arun Jaitley of the BJP and Brinda Karat of the CPI(M), for instance, stood together, with other party representatives, on Anna’s dais. This union was made possible by the failure of the standing committee, stewarded by Congress MP Abhishek Manu Singhvi, to win any plaudits from Team Anna for its draft. While those on Anna’s dais may have differed on the finer details of the bill, there was no denying that, sniffing an opportunity, and aware of Anna’s hold over large sections of middle-class India, they had united to rally against the ruling party. On show was a symbiosis: if the movement, finally, needed politicians, the politicians, too, needed the movement.

Anna’s eight-month battle has certainly yielded some results. The UPA is giving in, clause by niggling clause. And Anna’s team is in no mood to cede any ground: it plans to wait out the current session of Parliament, and, if necessary, begin a third round of agitation, which it says will last till the bill becomes law.

Whether or not the Lokpal legislation is passed this session, a process has been set in motion. This may be called a victory for Anna’s team; in a larger sense, however, it is the beginning of the process of the deepening of democracy, chaotic though it has been. Governments and the state—all too indolent in the past—may soon have to come to terms with point-by-point accountability, such as that demanded by the citizens’ charter bill, for instance, which binds government departments to set out rosters of non-negotiable commitments to citizens.