Cat-And-Mouse Over The Bull Game

Recent Jallikattu protests can portend fresh potential for Tamil nationalism. But the state's people have developed a stake in the larger federal polity. 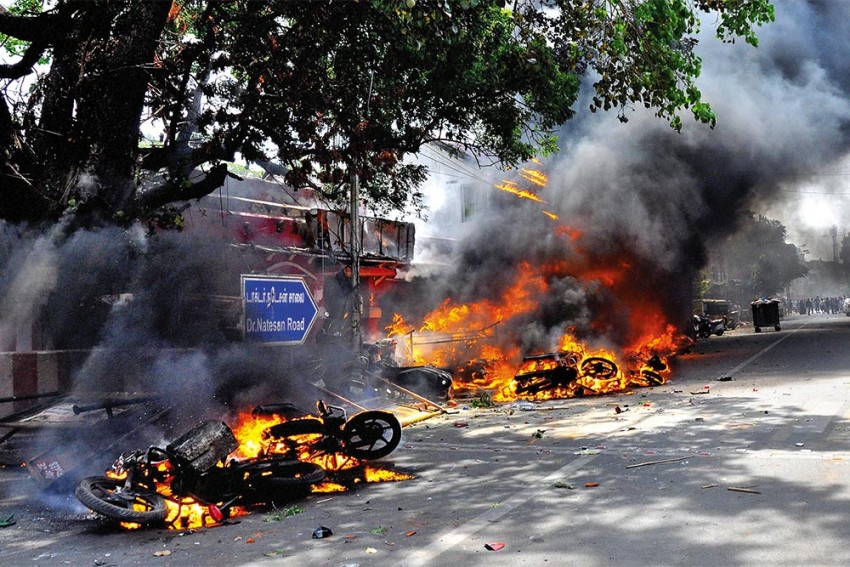 Up In Flames
Jallikattu fans went on the rampage, briefly, in Chennai
Photograph by PTI
T.N. Gopalan January 27, 2017 00:00 IST Cat-And-Mouse Over The Bull Game 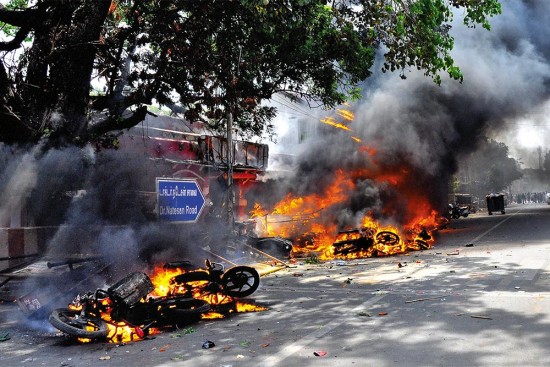 The Jallikattu bulls have a contextual link to Tamil Tigers. Back in the early 1980s, droves of Lankan rebels had a free run of the island-­nation—with the blessings of India’s prime minister Indira Gandhi. Madras did its back-up, with CM M.G. Ramachandran playing a second fiddle. The motives, though, differed. Indira was driven by certain geopolitical considerations, while the actor-­turned-politician had to walk the extra mile to fight taunts of being a Keralite and prove his ‘Tamilness’.

Rajiv Gandhi took over the mantle in New Delhi in 1984, and continued to patronise the Tamil milita­nts. Crackdown came about much later.

True, there were so many groups hotfooting around, but it was Velupillai Prabhakaran and his LTTE that caught popular imagination. Unlike the others who claimed to be driven by larger social vision, Prabha­karan’s approach was far simpler—and deadly too. The Tigers kept inflicting maximum damage on the majority Sinhalese, never mind the possible brutal reaction of the state. On both sides of the Palk Straits, the LTTE fed into the frenzy and thus emerged the sole champion of anything Tamil. Through all the ups and downs of the guerilla war, a strong vocal minority remained fiercely loyal to Prabhakaran.

Periyar E.V. Ramasamy, the founder of the Dravidian movement, did talk of a separate Tamil Nadu, but it did not have many takers. Even his own disciples turned their back at some stage, eager as they were to enjoy the fruits of power. They didn’t mind hobnobbing with the ‘Brahmin-Bania nexus’ of the northerners. A logical conclusion was becoming part of the NDA and its deafening silence during 2002 when the BJP-led coalition was in power at the Centre.

Still through it, all the anti-North sentiments persis­ted. So much so, even Sriperumbudur was sought to be explained away as a legitimate reaction of the severely hurt Lankan Tamil pride. Even today whenever there is a move to execute those convicted, parties take to the streets in a big way.  Electoral dividends might or might not materialise, but a strong sense of emotional solidarity exists at various levels. That was what one saw in the recent Jallikattu agitation.

The way it erupted and was eventually crushed clearly exemplify both the pull of Tamil nationalism as also its limitations. For long, the Tamils have been nursing the grievance that the Centre has been indifferent to Tamil interests, such as Cauvery or Lankan Tamils. Bull-taming was not much of an emotive issue till recently. It was a sideshow confined to some southern districts, though different versions of the sport flourished downstate. Pongal, essentially a farmer’s festival, is capped off by the bull-run.

It cannot be denied that Jallikattu has had an appeal at various levels. Veerapandiya Kattabomman, an iconic period film released in 1959, featured bull-taming. There is this raging bull dreaded by most; whoever tames it can win the hand of the attractive daughter of the owner of the bull. Of course, one succeeds—a popular sequence. The biographical war movie set a trend of sorts, what with the stylised dialogue delivery by Sivaji Ganesan, an awe-inspiring thespian.

All the same, Jallikattu was still on the margins of the Tamil nationalist discourse. But as the Thevars emer­ged enormously influential under J Jayalalitha, anyth­ing associated with that intermediate caste came to be seen as hoary and sacrosanct. Whatever perceived as a challenge to their traditions faced furious resistance.

Thus, when Jallikattu was declared unlawful by the Supreme Court following an appeal from animal lovers, the Tamil Nadu government brought out an ordinance seeking to nullify the May 2014 ruling. The ordinance was stayed. Thus the cat-and-mouse game continued before the explosion one witnessed now.

Panneerselvam lost no time as CM in crushing the protest after adding frenzy over Jallikattu, lest the public will be annoyed about youth getting mulish.

Incidentally, the Thevars these days come under the rubric of Mukkulathor, a three-segment community of kindred castes. It was V.K. Sasikala who was instrumen­tal in the remorseless ascent of  the Thevars, but she herself  is a  Kallar, one of the three segments. It helped her clan to consolidate their position by promoting the interests of a larger group. The Jallikattu stir comes against such a backdrop. If the protests had been confined to Tamil Nadu’s southern districts, nobody would have bothered much. But the crowds that gathered on the Marina in the state capital brought in a wholly new dimension. Largely college students, they were crying their hearts out, with the usual Tamil sabre-rattling. Slowly, the ranks of the protesters swelled, film personalities too jumped in with glee—some free publicity, after all. As channels vied with each other to capture the ‘Tamil mood’ from Ground Zero, whole families began to join the fun, with the bonus of TV bytes.

Well, one can understand TV channels’ lionising the protests and youth imagining they were on top of the world, but why would assorted Left and Islamic groups vigorously back the agitation? For the Left, when they themselves are unable to rally the masses on any issue in a big way, the spontaneous uprising was hugely welcome. Destabilising the state by anyone gives them vicarious satisfaction, even if they might be wary of the forces at work. Any number of Left intellectuals made a beeline to the Marina, made thundering speeches and posted on Facebook their own pictures in the company of fellow ‘revolutionaries’.

There is this editor of a prestigious English magazine, a CPI(M) member, who went ecstatic in posting the birth of a “new Tamil Nadu”. The declaration was widely shared on social media. And this intellectual should have known that the protesters were essentially apolitical, if anything regressive, in that they did not mention even in passing the widespread complaints that the Dalits were kept out. In any case, these floaters and drifters would never move towards the Left. Possibly in a rearguard action, the CPI(M) is seeking to appropriate some elements of Tamil nationalism.

The hosannas from the Muslim groupings are even curiouser, given that the LTTE had inflicted untold miseries on the Tamil Muslims in the island. But many Muslim outfits chose to swallow such humiliation and cast their lot with all kinds of Tamil nationalist elements, when they found themselves beleaguered after the deadly Coimbatore blasts of 1998. They perhaps reasoned Tamil nationalists could be trusted to speak out for them in times of need.

Jallikattu was on the margins of 'Tamilness'­ till Thevars emerged very influential under Jaya. Whatever seemed to challenge them faced hostility.

Moreover when the protests were aimed essentially at the Centre, led by a person most hated by the Mus­lims, there was every reason for the Muslim formati­ons to do their bit to fuel the agitation. But then if such factors had been at work, making it look as if the state was on the cusp of a new era, not many seemed to und­erstand that the stir grew in intensity only because the ruling AIADMK saw some benefits for itself in the eruption. But the party was certainly not going to allow the protests prolong indefinitely. For, a state of permanent tension would work to its disadvantage after all. Even the Thevar appeasement could not be stretched beyond a point when one’s own survival was at stake.

Interestingly, the anti-Koodankulam reactor prote­sts petered out once Jayalali­tha withdrew her support. She was using the activists for her political ends. Once she thought she had achie­ved them, she came down hard. The agitators did not realise they had little leverage, that they were surviving at the sufferance of Her Majesty.  During that period of honeymoon with the government, they went overbo­ard, harassing reactor officials and warned not a stone would be displaced. All work must come to a grinding halt, they declared rep­eatedly. Only to be deflated in a jiffy.

So also now, after doing their bit to have Jallikattu celebrated, the government lost no time in crushing the stir—the public would only be annoyed that the youth were being unreasonable, when the government had done its best in the circumstances. There has been strong criticism about  police heavy-handedness. A video of a cop torching an autorickshaw went viral. The agent provocateurs didn’t realise they'd be exposed.

But then the point was unless the Marina was cleared, the protesters, even if in trickles, would remain a big headache. The youth, drunk with their huge success, were unwilling to give up, raising all kinds of silly dem­ands. Appeals fell on deaf ears, and hence the pol­ice had to bring down the curtains.

So what exactly is the message of Jallikattu protests? There is a Tamil nationalist constituency that could be tapped into, but identity politics won't be the defining feature of Tamil society. For, people have developed a stake in the larger federal polity.

(The writer is a veteran journalist based in Chennai.)