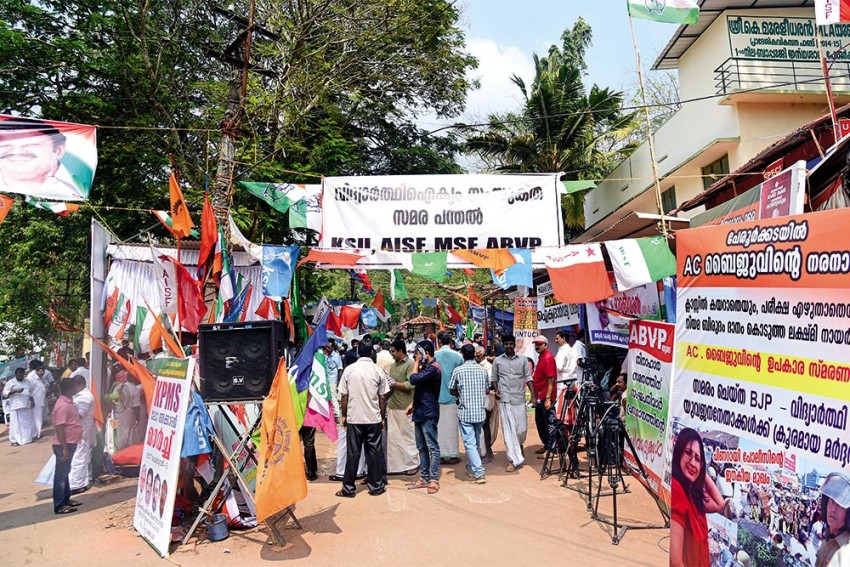 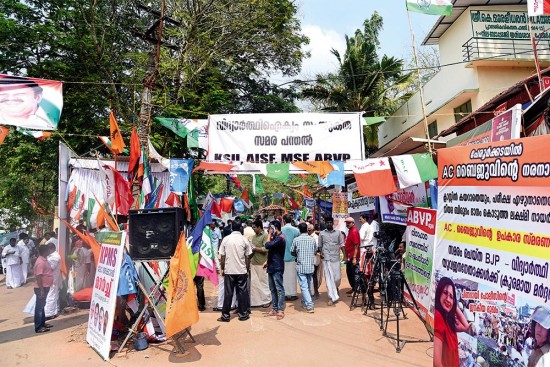 Quite the Nigella Lawson of God’s Own Country, Dr P. Lek­shmi Nair’s cookery shows on the Marxist party’s television channel draws legions of Mala­yali fans across the world—in places much beyond she travels with a camera. Back in her state’s capital, as principal of the Kerala Law Academy (KLA), the bespectacled administra­tor has got hordes of detractors for her ‘auto­cratic’ style of helming the private college in Thiruvananthapuram. There is even a case under the SC/ST Prevention of Atrocities Act slapped against Dr Nair, who comes across as a chirpy soul at her popular programme on ‘Kairali’. She is accused of derogatorily calling a student by his caste name in front of others. For nearly a month from January 10, stude­nts of the college went on a stir dem­anding the principal’s resignation.

The strike, a week after which came the first death anniversary of Dalit student Rohith Vemula, was finally withdrawn on February 7 after the Left government ass­ured that it would intervene if the management reneges on an earlier agreement struck with the agitators. The January 31 pact said Dr Nair has been removed from the post of principal. However, she has not quit and the document makes no mention about her discontinuance from the KLA management or the board of directors.

What shocked her viewers and the outside world is that the picture the students painted of Dr Nair was less charitable than what the pleasant personality on the small screen would suggest. They accused her of manipulating the internal assessment process that translates into nearly a third of the total marks. The students said she graded them according to her whims and fancies. Says, the 6th-semester student Ayra John, who was at the forefront of the agitation: “She told me she does not like my size and weight nor the look of my face, so she cut my marks.” Another student Xavier Thomas V.T. was not allowed to write his exams even though he had a valid examination ticket from the university. It has been alleged almost 21 students were failed for no particular reason. Still worse, the students say she routinely called them by their caste names and made derogatory comments about them in front of the class.

Vivek V.G. from a Scheduled Caste filed a complaint in January 2017 that Dr Nair had called him by his caste name in January 2016, while K. Selvam, another student from a backward community, says she had asked him to clean the academy restaurant-cum-canteen ‘Cherukada’ and serve at the table for a week during class hours. Though the police took a statement for bonded labour, no FIR was registered.

Selvam thus went to file a complaint with the SC/ST Commission, and was told that the body’s chairman is a former KLA student. Likewise, the alumni list on the website boasts of five sitting judges of the Kerala High Court, one chief justice, a couple of ministers in the Kerala cabinet, several judges in the district and sessions courts, police officers, members of the law department of the Kerala University and over 20 MLAs in the Kerala Assembly. Girl students helmed the agitation, refusing to crack despite management pressure. The students allege that when they started the strike no one was willing to listen to them, their principal’s reach extended to every part of the judicial, educational and political system. It is said that Dr Nair, after her degree in 1986, had joined the third year in the five-year LLB course. It has been alle­ged that her father N Narayanan Nair, present director of Kerala Law Academy, had bent the rules to accommodate her in that class even when there was no lateral entry for the LLB course.

Girls led the stir, and it won the support of the Muslim League, BJP, Congress and the CPI. The CPI(M) alone remained isolated.

The influence they wield is believed to extend right up to the chief minister’s office. Current CM Pinarayi Vijayan had been quiet about the entire issue throughout the month-long agitation. Vijayan is said to be personally close to Lekshmi’s uncle Koliyakode Krishnan Nair, a CPI(M) state committee member. In fact, many members of the family are close to Vijayan. It was his factional rival and former CM V.S. Achuthanandan who wanted the misuse of the KLA land investigated. The CM dismissed that suggestion, but his revenue minister E. Chandrashekaran of the CPI initiated an inquiry. Says veteran political observer B.R.P. Bhaskar: “The CM is very much like (Prime Minister) Naren­dra Modi. He seems to deliberately avoid speaking on burning issues.” Another political analyst A. Jayashankar points out that this silence of the CM has damaged the image of the party. “Many in the CPM were indirectly supporting the students, while V.S. openly visited the students and the CPI backed the students. The BJP gained from entering the protests early. When the SFI backed out midway, the students got huge support from the public.”

The CPI(M)’s top boss is keen to dub it as a local matter on which the media had an “agenda”. “This is not a national issue,” says party general secretary Sitaram Yechury.  CPI secretary D. Raja says it is for the CPI(M) and its student’s wing to explain why the SFI joined the students’ protest six days after it began and withdrew in bet­ween (January 31). “It was on the complaint of an AISF student that a case was registered. There are allegations of discrimination and land is also under question and a probe is going on,” he adds.

The CPI, an ally of the ruling LDF, was at the forefront of the student agitation in what looked like an embarrassment to the Pinarayi government. Says Kanam Rajendran, CPI state secretary: “There is no difference of opinion between the CPI and the CPI(M). A report regarding the land issue V.S. raised has been submitted to the minister and the government is bound to protect the land according to the law.”

The KLA, the first private law college in the state, began functioning in 1967 on government land leased to them. This was assigned to them in 1984 with a condition: the land be used only for educational purposes, but there have been allegations of misuse of the land. Bhaskar says the management was initially with a trust, but now the trust “has been reduced to a family aff­air”. The family has been cultivating contacts systematically across the political system,” he adds. “They use clout widely. Even if the students’ stir has been settled, we have provisions to check if there is any illegality regarding the use of the land.”

What is interesting is that the KSU (Congress), AISF (CPI), ABVP (BJP) and the MSF (Muslim League) came together to fight for the students’ demands, while the SFI pulled out of the strike when Dr Nair went on leave. Though the SFI enjoys brute majority in most colleges, it withdrew from the stir after the first talks with the management, leaving it to the other parties to come together and fight for the rights of the students. Ironically, the SFI, which on the Vemula death anniversary on January 17 pasted posters of the Hydera­bad student all over Kerala, virtually abandoned the Dalit students of KLA subsequently.

The CPI-ML says the stir underlines the general impression that self-financing inst­itutions have been exercising the management’s whims. “Casteist abuse is a serious allegation onto which the management sho­uld have promptly acted. In its absence, it is for the government to do so,” says the party’s state committee member K.M Venugopalan. “Instead, the principal is emboldened by the government’s stand.”

The strike saw some strange partners and dissenters: the Muslim League and the BJP took the same position. Leaders of different political parties like V. Muraleedharan and V.V. Rajesh of the BJP besides K. Muralee­dharan of the Congress went on a hunger strike in front of the KLA, demanding the resignation of the principal. Says V. Muraleedharan, “From the part of the BJP, this is first time our party is taking a public issue in the state. Both the BJP and the ABVP gained much from this agitation and we won for the students.”

The strike also exposed the way the KLA was functioning. Allegations were flying thick and fast that many of the law degrees were given out to students who hadn’t att­ended classes. There were also allegations that the marks of the students of other colleges were being tampered with. Only investigations will reveal this, but with the Pinarayi government said to be favouring the mana­gement, the allegations may well be swept under the carpet.

Students’ Strikes Led By The Left

By Minu Ittyipe with Bula Devi in Delhi

Skeletons In The Board