Caste As Gang: Why Hindu Society Is ‘Anti-Social’

Ambedkar saw exactly how Hindu society, ‘cut off’ from itself and anti-social at its roots, is no society at all. It is foolhardy, therefore, to imagine it as a unified nation. 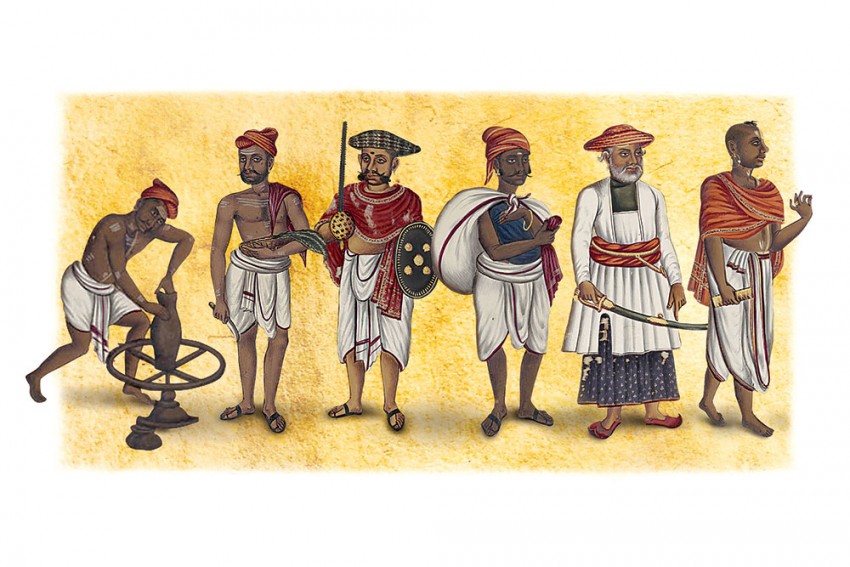 Homo Hierarchicus
The caste you are born into decides what you become
Soumyabrata Choudhury April 06, 2016 00:00 IST Caste As Gang: Why Hindu Society Is ‘Anti-Social’

At one point in his 1945 work What Congress and Gandhi Have Done to the Untouchables, B.R. Amb­e­dkar says that for Gandhi caste was only an anachronism, not anathema. This strong and somewhat difficult word signifies that Gandhi does not understand how caste is not an external evil that has crept into Hindu society. Caste is not simply a ‘bad thing’, a curse of bad times or bad people, that can be removed by men with good intentions. It is ­Hin­­­­du soc­iety’s curse against itself. And it ma­kes this soc­iety, at its roots, anti-social.

In Greek, anathema is to be cut off, so the anathema of caste society means Hindu society is “cut off” from itself. Given this original wound, it is useless to imagine Hindu society as a unified nation. In fact, if India’s self-determination as a modern nation has to be taken seriously, then it has to be not only through the anti-colonial struggle but also through an anti-caste and, therefore, anti-Hindu struggle.

For every dense expression, Ambedkar also has a fluent and graphic one to offer. In the same chapter, he describes castes as gangs. Perhaps he borrows this image from his illustrious teacher at Columbia Univ­ersity, John Dewey, who saw gangs as “narrow cliques” governed by “intense loyalty to their own codes”. This has some inte­resting cultural and attitudinal implications for the Hindu-Indian context.

Firstly, it is a common truth that all societies consist of groups, cliques, corporations and gangs, as it were. However, it is also more or less understood that society itself is not a gang, not a gang of gangs. If it is, then things are at a serious pass.

That is Ambedkar’s point: Hindu society is not a society because caste, at its core, produces a kind of auto-immune disorder. Because of this internal fragmentation into castes or jati gangs, society, instead of being a totality, is in a state of permanent minoritisation. Majoritarian Hindu society is ind­eed nothing but a sliding scale of permanent minorities. No wonder its culture is passive-aggressive and neurotically fastidious. Gang psychology “makes [the] culture [of Hindu social groups] sterile, their art showy, their wealth luminous and their manners fastidious,” writes Ambedkar.

The permanent minoritisation of Hindu society also has a pithy consequence for the national question, or rather the Hindu’s ‘national attitude’. Because Hindus are inc­a­pable of constituting or assembling as a true nation, they are also unable to conceive the existence of other historical nations. Hence, either they tend to look upon other communities and nations as gangs that are less (Pakistan?) or more (USA?) powerful than themselves in the very image of Hindu caste society, or they fantasise their own identities in the image of a global-immemorial ‘Sanatan Akhand Bharat’.

Majoritarian Hindu society is nothing but a sliding scale of permanent minorities. No wonder its culture is passive-aggressive and neurotically fastidious.

Indeed, what Hindu (anti-)society, in Ambedkar’s eyes, institutes as a contradictory form of graded social sovereignty and homogeneous national sovereignty is the same form cold-bloodedly inflicted by the US on other nations. The US axiom is that all nations are sovereign but the ones who ‘imitate’ American sovereignty more faithfully are more sovereign than others—an internationalisation of sorts of the caste system that could make Ambed­kar’s Hindus proud today of having provided a paradigm for contemporary imperialism. For recognising their true genius, at least, they are entitled to be grateful to Babasaheb in the year of his 125th birth anniversary!

According to Ambedkar’s earliest scholarly presentation at Columbia in 1916, Castes in India, the caste system grows and spreads by imitation. The notorious figure of the ‘Brahmin’ is the model and effect of imitation. From a static perspective, the Brahmin is a kind of authority figure placed at the apex of a hierarchical system whom everyone down the ladder, in some measure or manner, imitates. So who is the Brahmin and from where does his authority arise? Here the system starts spinning around its axes and sub-axes, producing a peculiar ‘Brahmin effect’ on Hindu society.

From a dynamic point of view, the Brahmins’ social, educational, religious and political privileges encoded in the varna system as written down in books such as the Manusmriti are not explained by these books. It is the other way around: Hinduism as a fastidious and pedantic religion of books, if not the Book, is explained by micro-codifications of authority at the most minor levels and inte­nsit­ies of variation. These variations are expressed through castes and sub-castes spread across distances, where the same caste name can possess a different position of power depending on region and state.

Yet, across these variations, each caste treats the caste immediately above in the scale of gradation as the ‘Brahmin’ it must imitate and the one below as one that must imitate it as the ‘Brahmin’. Thus, a ‘little Brahmin’ seems to scan the graded system like a virus spreading, in Ambedkar’s words, “the infection of imitation”.

Does this mean that nothing ever happens in the history of Hindu society and everything is an endless ploy of imitation within a graded system of sovereignty and slavery? According to Ambedkar, while “imitation is easy but invention is difficult”, the lightning bolt of invention or innovation does strike the grey Hindu sky when a “novel way of thinking” challenges the habits of society. However, even as lightning flashes and hopes of revolutionary liberation are raised, the sudden light is immediately penalised and excommunicated.

In his Columbia presentation, Ambed­kar said, “A novel way of thinking will create a new caste for the old ones will not tolerate it. The noxious thinker respectfully called Guru suffers the same fate as sinners in ille­gitimate love. The former creates a caste of the nature of a religious sect and the latter a type of mixed caste. Castes have no mercy for a sinner who has the courage to violate the code. The penalty is excommunication and the result is a new caste.”

Exactly 100 years on, we see today a great sectarian consolidation of Hindu­ism. The ruling dispensation thrives on including new sects, not all of them of elite caste origins. But the sectarian ideologies are utilised not just in their religious content but also in the form of corporate brands inv­ented for the world to buy into.

What else was Sri Sri Ravi Shankar in his latest extravaganza on the Yamuna floodplains doing if not sugarily unleashing his gang/sect on nature and people in the name of Indian culture and Brand India? What else were its apologists, including the prime minister, doing if not attempting to blackmail the critic with the syllogism, “If you oppose the festival, you oppose the brand. If you oppose the brand, you opp­ose the nation”? Completely obscuring the fact that it was a sectarian and corporate expropriation of a proper name meant omly for common use—“India”.

In contrast to the successful mobilisation of a sectarian corporate strategy for Hindu-Indian interests against the acc­ess of “India” to a kind of common language, a people’s vulgate, the other instance of the “mixed caste” of illegitimate love remains an unr­econciled and incandescent problem. From Haryana to Tamil Nadu, “illegitimate love” today provokes the kind of deadly vio­lence that goes beyond mere excommunication. Yet love, mad love does not cease exposing the madness of caste society—and to that extent, it is the lived hope for a future society where love will just be love, heartfelt and erotic, not diverted into a murdering rage on behalf of Bharat mata.

No Thing As Genetic Merit