Bond is asked if he'd want his martini shaken or stirred. "Do I look as though I give a damn," says he. Wow! 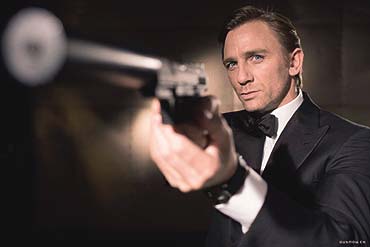 If Bond films are all about "girls, gadgets and a good-looking spy", then lots change in Casino Royale. Girls and gadgets get a short shrift and the spy is good-looking in a rather unforeseen way. Craig’s Bond is not overtly suave and smooth nor witty and charming as Bond is meant to be. He is a man of some rather rough action here. He pounds people, gets bruised, bashed, poisoned and tortured himself. He also has a nice buff body that he displays to the hilt. My eyes were stuck on the lips. Whoever would have imagined a Bond with such a luscious pout, the most prominent one that you’d have seen in a man since Narasimha Rao. So a franchisee that has been catering to boys (or the eternal boy in men) transforms itself effortlessly for a woman’s voyeuristic gaze.

There’s more. That initial uneasiness in getting into the tuxedo. Or the tender, romantic moment after a violent encounter when he comforts his woman under the hotel shower. Campbell’s film is on the making of Bond, so he takes a lot of liberty. The nicest moment of reinvention is when Bond is asked if he’d want his martini shaken or stirred. "Do I look as though I give a damn," says he. Wow!

The new-age James Bond is born in the present so enough references to the contemporary political events, including 9/11, are thrown in. As for what the film is all about. Well, it’s about Bond getting even with Le Chiffre (Mikkelsen), the man who is financing terrorism in the world. How? By beating him in a game of cards. The representative of the treasury, Vesper Lynd (Green), has to keep an eye on Bond and his expenses. Eventually, and predictably, the two fall in love. And when she betrays him a cynical Bond decides he’d trust no one ever again and it’s then that M (Dench) begins to trust him.

The film has breathless stunts and encounters aplenty. There’s an incredibly long and extremely excitingly shot cat-n-mouse chase which just goes on for almost one entire reel. There are more impossible stunts and outrageous chases (specially the one on the Miami airport runway). In the midst of it, do look out for Richard Branson in the briefest of cameos, getting himself security-checked at the Miami airport.

Alone In A Dark Alley