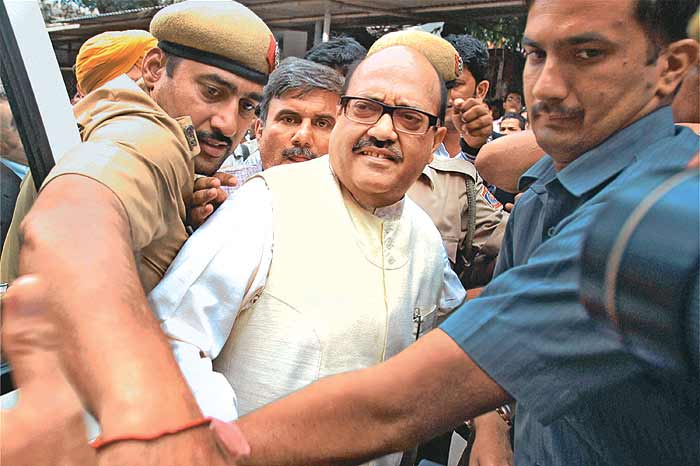 A day after a sombre session in both houses of Parliament owing to the terrorist attack at Delhi High Court, Indian politics reverted to its usual theatrics on September 8. Questioning the arrest of two of its former MPs, Faggan Singh Kulaste and Mahabir Singh Bhagora, in connection with the cash-for-votes scam on September 6, BJP leader L.K. Advani held up his wrists in the Lok Sabha as if they were already handcuffed and dared the government to arrest him. He alleged that those who supported the UPA-I government “through dishonesty by taking money are sitting here comfortably...but my two friends who honestly served the country are in jail”.

Giving the scandal a new turn, Advani also acknowledged, for the first time, that he had prior knowledge of the sting. “If anything was wrong, I would have stopped them. They were whistleblowers who reported the matter to Parliament. They presented the money (in Parliament). At that time, I was the Leader of the Opposition in the Lok Sabha and I know the facts,” he told the lower house. This followed the dramatic arrest, on September 6, of former Samajwadi Party (SP) leader Amar Singh, from whose house, the police allege, money was sent to bribe the BJP MPs. 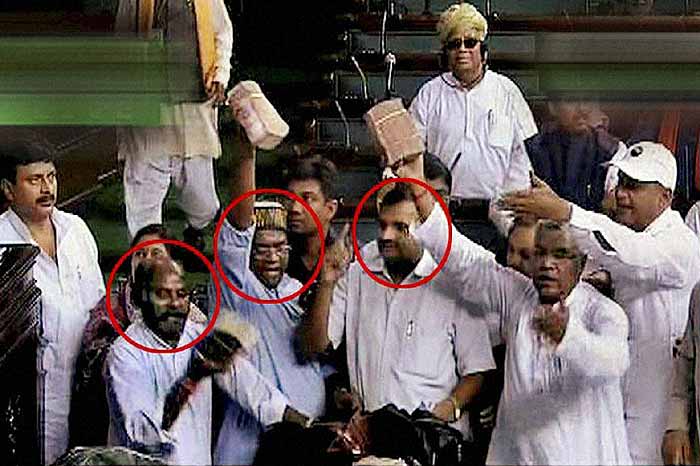 Whatever fitful progress has been made in the case owes to the Supreme Court, pressured the Centre and the Delhi police when the probe stalled. During this time, the opposition has been upping the ante against the government in response to a perceived manoeuvre to turn the tables on them. The BJP called for the “real beneficiaries” of the scam to be questioned; it says these include the PM and Congress president Sonia Gandhi. After the arrest of the two former MPs, the party decided to stand by them and even claimed ownership of the sting, which it says was conceived to expose alleged horse-trading during the trust vote on the nuclear deal.

Kulkarni, a former BJP man and a key figure in the scam, is in the US. He says he will reveal all in court on returning.

MPs from the Left, on the other hand, are calling for the investigation to be brought to its logical end. “Parliament has been maligned and those responsible must be taught a lesson and sent to jail. A precedent must be created so that something like this doesn’t recur,” says Gurudas Dasgupta, a Lok Sabha MP of the CPI. “The law must go to the root of this problem. Not one person responsible for this, whether from the BJP or the Congress, should be left untouched by the law.” The CPI(M), whose decision to withdraw support to UPA-I on the nuclear deal issue precipitated the crisis, stated: “The case of the three MPs who produced cash on the floor of the House (Lok Sabha) is only one small part of the overall operation undertaken by the ruling party and its allies to bribe and suborn MPs. Obviously, Mr Amar Singh was not acting alone.”

Right now, the spotlight is on the former Samajwadi Party leader. If it is indeed proved that the cash displayed in Parliament originated with him, the question is whose interest he sought to fulfil. Ashok Argal, an MP of the present Lok Sabha and one of the three BJP MPs who displayed the cash, says it’s time Amar revealed the truth. “Who did he work for? It was not as if he was going to become the PM (by unseating the government),” he argues. Unlike his associates, Kulaste and Bhagora, Argal is free because he happens to be a sitting Lok Sabha MP and his arrest requires the consent of the Speaker.

A former prominent Samajwadi Party leader, who was closely following the nuclear deal but did not wish to be named, said he found it “suspicious” how the party changed its position on the deal 10 days before the vote. He also mentions that Amar was in the US just before the trust vote deal and returned in time to play the role he’s alleged to have played. “My brief was to oppose the deal and I did so in the House on at least four occasions but things changed suddenly,” he says. “Amar Singh is a person who would not do anything without milking it. Around that time, he was very keen that his party become part of the government, something that would have helped him deliver benefits to his influential friends. Maybe the buying of MPs was his way of getting into the good books of the government, but it obviously did not work out.”

Amar, who rose from relatively humble origins—he’s the son of a small-time businessman of Calcutta—to become an influential political fixer in Delhi’s power circles, finds himself abandoned by his former party today. “How can I vouch for any other person? I wasn’t there with the MPs when they went to meet him,” says Rewati Raman Singh, an SP Lok Sabha MP. He says Argal came to his house on July 21 seeking to join his party. He was questioned by the Delhi police last month. SP spokesman and general secretary Mohan Singh also sought to isolate his party from what Amar did as a member of the SP. “The party had nothing to do with the scam. In fact, we were victims, as some of our MPs were bought by the bsp during the trust vote,” he alleges, adding that the investigations should reach the “source of the money. The picture that has emerged so far is incorrect”.

Amidst all this conjecture, the other key figure, BJP’s ideas man Sudheendra Kulkarni, who was also associated with the sting, is travelling in the US. He told Outlook in an e-mailed statement that he is away on a “pre-scheduled” programme that was planned before he was named in the chargesheet. Asked if he had anything to add, given Amar’s arrest, Kulkarni wrote: “I shall present myself in court after my return to India on September 13. I think the time has come for me to answer many questions in court. All I can say is that truth will prevail.” Millions of Indians, incensed at how low our parliamentary democracy had stooped on July 22, 2008, will hope that it indeed does.

“No Clue Where Donations In The Past Year Came From”