Cash Down, But The Paint's Still Wet

A Bikash Bhattacharjee fake, record prices...Neville Tuli-organised auctions have it all 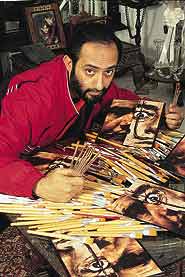 Neville Tuli is a marked man. His auction house Osian’s sale at the Imperial Hotel in New Delhi on March 1 was a huge success, with all 89 lots sold netting a mammoth Rs 46.62 crore. But it also attracted its share of controversy, with a leading artist alleging that at least one work on the block was a fake. Artist Sanjay Bhattacharya was kicked out of last Wednesday night’s auction because he claimed that lot No. 63, Untitled (Mother Teresa and the Children of Calcutta), was not the work of senior artist Bikash Bhattacharjee. This was later substantiated by the artist himself who said, "I could never have painted such utter trash in my life." Sanjay is convinced Tuli knew the painting was not an original of the Bengali master. "Tuli wouldn’t have tried to sell this painting in Calcutta. The style is very different and so is the signature. He knew it was a fake but took a chance, hoping no one would notice or speak up," Bhattacharya says. Despite repeated efforts, Tuli himself was unavailable for comment.

Tuli was born in England but returned to India to create the country’s first auction house, Osian’s, in 2000. Its efforts to promote the work of young artists, and the archival material collected on Hindi cinema have earned it a great deal of acclaim. Osian’s also established India’s first Authentication, Certification and Validation Council for Indian Modern Art, which aims to cut down sales of fraudulent works—but this only makes Tuli’s current predicament even spicier.

And it’s not like his name hasn’t cropped up in similar controversies before. Some of India’s biggest artists, like Vivan Sundaram and Gulammohammad Sheikh, launched an e-mail campaign before an Osian’s auction in 2005 to stop at least three ‘fake’...