It has always liked to go it alone. Can it hunt with a pack of motley partners? 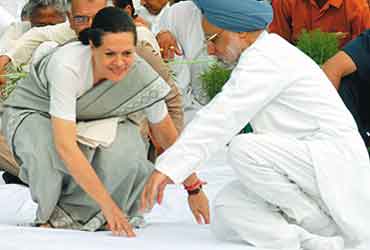 Congress leaders say the message from 10, Janpath is clear: there's no room for complacency. Even though it is peacetime, the party isn't shutting down its war rooms. Congress president Sonia Gandhi's promised "mahasangharsh (grand struggle)" to re-establish the party and change the face of the Indian polity has a large number of takers in the organisation. The key players in the Congress election campaign, particularly the core committee which manned the crisis councils, have stayed in the party rather than join the government. Among them are Congress Working Committee (CWC) members Ambika Soni, Ahmed Patel and Motilal Vora and strategists Ramesh and Salman Khursheed. "With Mrs Gandhi staying out of the government, the party is where the action is," says a buoyant Khursheed.

Soni turned down a cabinet berth for a chance to be part of the new Sonia team, much to the chagrin of her CWC colleagues who migrated to the government. By emulating Sonia's example, fumed a septuagenarian cabinet minister, Soni had tried to "make us all look small". Another CWC figure felt she should have taken up a cabinet post and then given it up after a few months. But the responsibilities of being in government would have meant her closeness to the sanctum sanctorum—the Congress President's Office—could not have been maintained. Even so, her colleagues acknowledge, turning down a heavy-duty portfolio like power (which went to P.M. Sayeed as a result) would've been tough. "Her motivation must have been very powerful...bazee maar gayee (she has won this round)," said a senior party leader. Soni has proved her loyalty beyond doubt and her position is, for now, unassailable. Similar "sacrifices" have been made down the line. Even media secretary Tom Vadakkan, offered a position on the personal staff of a cabinet minister, preferred to stay with the AICC!