A dish has broken borders in South Africa 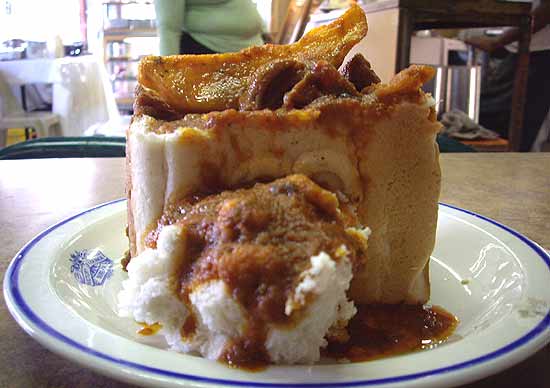 Forget the debate about Indians’ national dish; how about our international dish? Just as our diaspora writers and entrepreneurs are coming into their own on the global stage, so are our foods, with hybrid dishes like masala pizza and the British favourite, chicken tikka masala, finding their way onto menus and dinner tables worldwide. Now from South Africa comes India’s strongest contender in the culinary equivalent of the Miss Universe pageant: the bunny chow.

At a modern bunny chow joint in Durban, Africans of all colours can be seen chowing down on what is, essentially, half a loaf of bread stuffed with curry. It’s a lot of food, and it’s delicious. Eating among fellow diners who are black, brown, and white, it’s easy to forget that the bunny chow was born of segregation: South Africa’s extreme and relentless version of it.

I first sampled the bunny chow while researching the migratory journeys of my Gujarati family. My great-great-uncle Ganda Kapitan was 11 years old when he stowed away on a boat from India to South Africa. The year was 1905, and by 1912 he started a food stall called G.C. Kapitan Vegetarian Restaurant in the Little India area of Durban. The restaurant stayed open for 80 years, spanning South Africa’s history from Mahatma Gandhi to Nelson Mandela.

In between, during the long harsh years of apartheid, the white-supremacist government of South Africa wanted to keep the races absolutely separated. So they banned black Africans from eating in Indian restaurants. Uncle Ganda and the owners of other curry houses realised they would need to begin ‘takeaways’ if they wanted to serve their African customers.

In search of a cheap container, in the age before plastic and styrofoam, they hit upon the humble bread loaf. They served chicken, mutton and vegetable curries inside the loaf so that customers could carry it away easily. Uncle Ganda, being strictly vegetarian, made the ‘beans bunny’ his signature dish, using broad flavourful fava beans in rich tomato masala sauce.

Today the bunny chow is considered a South African national dish (an “integral part of South Africa’s culinary heritage,” according to the country’s newspaper of record, the Johannesburg Times). As South Africans migrate elsewhere, of course, they want to take their favourite food with them. So as with South African Indians’ other great contribution to the world—satyagraha—the bunny chow is also moving beyond its birthplace.

In a restaurant called Madiba in Brooklyn, New York, I ate a bunny chow with my cousin, a Johannes-burg-born, Florida-raised doctor. In my hometown of San Francisco, I had a birthday party at which we made bunny chows using my city’s trademark sourdough bread. All you need is a crusty loaf of bread, a delicious curry, and a big appetite.

To eat it is another trick altogether. If you just bite in, everything spills out—a steaming, spicy mess, dripping all over your lap. With experience, you learn to nibble gently at the outer crust; to cradle the loaf in one hand and gently scoop out curry with the other, using the extra bread that was pulled out earlier, or your fingers, so that nothing spills; to savour the complementary tastes of rich spices and soothing, yeasty bread.

True to its origins, and like the Indian diaspora itself, the bunny chow is authentic yet creative, full of surprising depth and texture, and of course, infinitely adaptable.

And just as the NRIs are showing an increased tendency to come home, so is the bunny chow. Only a few months ago, Geet Indo-Afro Restaurant opened in Andheri West. Started by a restaurateur from Pretoria, the eatery serves South African specialities such as the bunny chow—which must be enjoying a warm family reunion being near its cousin and ancestor, the Mumbai pau bhaji.

(Hajratwala is the author of Leaving India: My Family’s Journey from Five Villages to Five Continents.)