For the Indo-Pak bus to be successful, both nations must trust each other 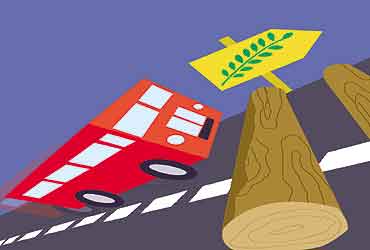 outlookindia.com
-0001-11-30T00:00:00+0553
The first buses to ply between Srinagar and Muzaffarabad in 57 years are being readied in the two state capitals even as I write. But it is already apparent that both countries will have to cross many rivers of mistrust and shed many encrusted prejudices if the bus service is to serve its main purpose—of empowering ordinary Kashmiris and healing the wound that the division of the state and the closure of the northern and western approaches to the Valley dealt to their psyche. Both in Jammu and Muzaffarabad, the intelligence agencies of the two countries have been busy trying to turn the selection of the passengers who will travel on the two buses to their political advantage.

They have been able to do so because of a clause Pakistan insisted on when the broad outlines of the agreement over the bus service were hammered out by the late J.N. Dixit and his counterpart Tariq Aziz. Once India had agreed not to insist upon the use of passports as documents of identification and allow travel on the basis of identity papers issued by the local authorities, Islamabad insisted upon the right to verify the antecedents of the applicants. New Delhi agreed (albeit with some trepidation) but instituted a verification process of its own. This process has been tuned into a method of selection and exclusion that, if not substantially relaxed in the coming months, will defeat the entire purpose of the bus service.

According to sources in Jammu, the attempt to subvert the selection process has been made by Islamabad. Although the Indian authorities initially cleared all but a handful of the more than a hundred applicants whose names were sent to them from pok, Pakistan cleared not many more than a third of names that India sent across. What rang alarm bells in Jammu and New Delhi was that more than a dozen of those cleared turned out to be not members of divided families, but the children or relatives of slain militants. They were ostensibly trying to take advantage of a Pakistani offer of higher technical and medical education to the children of slain militants.

This immediately aroused suspicions that Islamabad's real purpose was to brainwash these already deeply alienated young people and send them back as 'sleepers' to the Valley. Hectic inquiries followed and when the intelligence agencies discovered a girl who had been denied a passport to go to Pakistan last year but had applied to go on the bus after changing her father's name and a few other particulars, their fear that Islamabad wanted to use the bus to recruit agents seemed vindicated.

The Indian agencies have also been making exhaustive checks of the applicants from Jammu and Kashmir before forwarding their names. Their purpose is to keep all those who have had a connection with militancy in the Valley off the bus at least for the time being. On both sides, the verification of the antecedents not only of their own applicants but also of the applicants cleared by the other side has become so detailed that at present each side can only send one bus a fortnight. If the frequency of the service is not increased, this alone will suffice to reduce cross-border travel to a trickle and make a mockery of the bus service.

Since some verification is probably necessary, at least till the two countries are much further down the road to peace, some jockeying for advantage by the intelligence and security agencies of one or both countries was only to be expected. But if this doesn't cease in the coming months, the bus service will fail to make the expected contribution to peace. The plain truth is that India and Pakistan will never be able to resolve the Kashmir or any other dispute if they do not, at some point, learn to trust each other and not to abuse each other's trust.In this, it is India that will have to take the initiative.

Pakistan's desire to favour the children of militants may have a simpler explanation than the one that Indian intelligence agencies have jumped to. Its government is already being severely criticised by its own right-wing for having agreed to the bus service. This is one way to fend off the criticism. The severity of the pressure that the Musharraf regime is under is revealed by its attempt to use the very first bus service to demonstrate its sympathy for the Kashmiri cause.

By the same token, it is possible to be too suspicious of the reasons why children and relatives of militants want to board the bus. The offer of higher education is a potent lure in a state where this has been regarded for decades as the gateway to a better future. In fact, one of the main reasons for the outbreak of militancy in 1988-89 was the corruption that surrounded the award of seats in the state's engineering and medical colleges. The antidote to the Pakistani offer might be to offer more scholarships to Indian universities, especially to those whose lives have been laid waste by militancy.

Nor is there any evidence to support the conclusion that a Kashmiri who studies in a Pakistani medical college will necessarily return as an ISI agent. If anything, education in Pakistan is likely to demystify the country and enable them to see that they are better off in Kashmir. This was the message that the vast majority of the militants who went to Pakistan in 1989 and 1990 brought back to the Valley. It played no small part in shrinking Pakistan's support in the Valley.

Finally, weeding out former militants or their relatives will perpetuate and even deepen the alienation of precisely those whose wounds need to be healed, and who need to be brought into the political mainstream. That will be doing the work of the Pakistani hardliners for them.