They didn't know the hemlines from necklines then......now it's all hip and businesslike. Even in the newsroom. 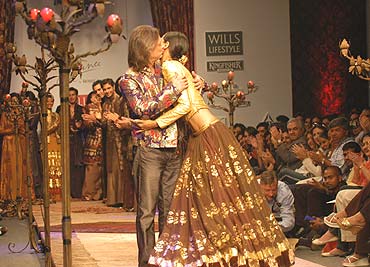 outlookindia.com
-0001-11-30T00:00:00+05:53
I still remember being mocked at during an edit meeting at The Other Magazine—those mandatory Monday morning gladiatorial jousts where knives were brandished, reputations shredded and colleagues often savaged. I'd pitched for an "omnibus" story (oh, how they loved that word out there...and yes, the other one was "sit rep") on Indian fashion. I explained to multiple dancing eyebrows that fashion had the makings of a serious business but in its present avatar it looked more like a media circus peopled with assorted auntyjis, some designers, clever cut-and-paste conmen/women and MANY wannabes who had clambered on to a gravy train.

My question? Was Indian fashion about designing wedding/sangeet/reception lehengas for Dolly Auntie's daughters or was it a serious business? Was fashion translating into affordable pret-a-porter lines that would make a design statement on our streets and hopefully the world stage, or would it remain confined to ageing aunties sporting frocks and kameezes sold to them by English-speaking "designer darzis" in Cuffe Parade or GK-I drawing rooms?

For making which observation I was christened and subsequently saddled with the sobriquet Mr Pret-a-Porter for the rest of my (mercifully) short sojourn at The Other Magazine.

Looking back now, I understand why. No one understood. The blind were leading the blind. There were a handful of designers then. Rohit Khosla, Rohit Bal, Rina Dhaka, Ritu Kumar, Abraham and Thakore in Delhi; Abu-Sandeep, Tarun Tahiliani, Wendell Rodericks, Shahab Durazi in Bombay. (No, it had not yet been Mumbaied, or had it?) They were glib, glamorous, good-looking and they sold as much as their clothes did. In the press, there was nothing. Only editors hungry for t&a pictures and journalists who did not know their elbows from their knees, hemline from neckline, happy with the occasional handouts. (I'm not talking about press releases here.) And fashion shows were been-there-done-that cocktail parties for family and friends.

Fashion as business? Forget it. As serious trade? You must be joking!

To paraphrase the cigarette ad—they've come a long way, baby. For one, fashion is no longer a social, but a trade event. There is a seasonality to fashion with designers showcasing winter/summer lines at the regular trade fairs we call Fashion Week. Yes, there are the obligatory parties but they follow rather than precede or substitute for the event. Style books, buyers, eight shows a day in sometimes suffocating halls teeming with trade analysts, buyers and, yes, journos who finally have taken the trouble to differentiate chiffon from georgette instead of chortling about which model looked beautiful and which designer (yawn!) was gay and who was sleeping with whom. Passe! Now we all want to be hip, with it! Better still, you hear other names: Deepa Varma, Gopika Pillai, Jojo and Yatin: the make-up artistes. Ajay Bisht, Edward, Vandana Sharma as stylish stylists. And the fashion photography scene has exploded: Anay Mann, Ashish Khosla, Bharat Sikka and at least a dozen other brilliant, forceful young men with vision, jostling for a slice of the pie.

Finally fashion. Kaleem, that boy from Patna, is making waves in Milan. Sabyasachi Mukherji, Anshu Arora Sen have elevated whimsy and nostalgia to winning lines that wowed international critics. So have Rajesh Pratap and Anamika Khanna. Varun Bahl and Gaurav Gupta generated panic in Jurassic Park! Suddenly the Gudda/Guddis, mavens and mavericks were under notice to re-examine their design premise. It was possible to be incredibly stylish and, yes, Indian sans sequins and machine embroidery.

Now The Other Magazine does serial stories on the Indian fashion scene. Sorry to seem to be licking my chops, but the evidence speaks for itself. Would you like some more pret-a-porter, Mr Editor of The Other Magazine?

(Sunil Mehra is a journalist and fashion critic)

Sound Is An Image