The collapse of the WTO ministerial had one silver lining: a closing of ranks in the developing world Updates 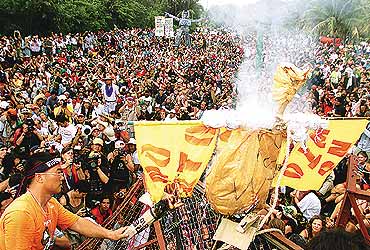 outlookindia.com
-0001-11-30T00:00:00+0553
Lee Kyung-hae, a 56-year-old rice farmer, who lost his farm four years ago, plunged a knife into his heart on the first day of the fifth WTO ministerial at Cancun. Lee's suicide represents a losing battle being waged by six million farmers against a flood of agro-product imports in South Korea despite tariffs of over 100 per cent on 142 farm products.

The act symbolised the same hope and despair that made the newly formed G-23 group (including China, India and Brazil) walk out of what they felt was an unequal deal that would force the poor to do more and the rich less. In Cancun, the G-23 asked the rich nations to reduce the unreasonably high subsidies given to their farmers and allow greater market access to agro-products sold by poor nations. However, the developed world—notably EU, Japan and the US—insisted on an agreement on the contentious Singapore issues on investment and competition that required poor nations to further liberalise rules governing foreign investment, corruption and bureaucratic reduction.

Since neither side was willing to yield an inch, the talks failed. Another meeting will be held later this year to thrash out the same issues once again. In India, commerce minister Arun Jaitley is being hailed as a hero for bringing the concerns of developing countries centrestage. This, he says, "reflects the success of Cancun". He adds: "No deal is better than a bad deal."

In stark contrast, EU trade commissioner Pascal Lamy, with his hands bound by recession in two major member-countries France and Germany, sharply vented his disappointment: "We came here to reach 50 per cent of the negotiation and we are back to 30 per cent." He also suggested that the size and disparity of the WTO, where the smallest member can block any action, had confirmed his view that it was a "medieval organisation" and needed streamlined decision-making!

Free trade is a powerful force for both development and poverty reduction. Unfortunately, most trade is neither free nor fair. The WTO, a rules-based, predictable and democratic (one country, one vote) multilateral organisation, was designed to correct the skews. But for years, rich nations browbeat aid-dependent poor ones to work out deals that favoured the former. It was during the Seattle meet in 1999, that for the first time outsiders demanded a say in the deal-making process and talks collapsed. In Cancun, the African nations and others, hit by low global prices of agricultural products, ensured a repeat performance. The reason: the rich nations arrogantly told them that the problems relating to high subsidies given to their farmers would be tackled later.

Says RGF director Bibek Debroy, who was present in Cancun: "Had there not been a walkout over Singapore, there might have been one over agriculture, considering that the September 13 draft not only contained very little, it was also perverse in some respects." According to a study by the International Food Policy Research Institute, US farm policies deprive developing nations of $11 billion annually in lost export income. In case of the EU, the figure is $20 billion.

Some critics contend that the Singapore issues are just chaff thrown up by the West to disguise their own intransigence over agriculture. Explains Amitabh Mattoo, lead economist, World Bank: "Many developing countries would have been willing to pay the price of negotiating these issues if there had been a sufficient commitment by the EU and others to eliminate subsidies." Rich countries may have also overplayed their hand and misjudged the strength of feeling in the developing world.

Sadly, both sides lost at Cancun. The World Bank estimates that had a deal gone through at Cancun, 144 million people in developing countries would have been out of poverty.And there's also the danger that formation of regional trading blocs and country-to-country deals will gain further momentum now, forcing the poorest to yield more. US trade representative Robert Zoellick has already issued a veiled threat to pursue preferential arrangements with 'friends'.

Says Arvind Panagriya, professor, University of Maryland: "Some large developing countries like China, India and Brazil already face discrimination in the European and US markets. This will get worse." For instance, the People's Daily of China points out: "American clothes imported from India are charged 19 per cent tax, whereas clothes imported from France, Japan and Germany are charged only 0-1 per cent." But the rich nations, desperate for an economic upturn, lose as much: poor growth in developing nations restrict markets for their goods. Besides, farm subsidies are a burden on their own consumers and taxpayers.

However, the G-23's biggest gain is the significant progress made towards a common negotiating bloc, despite their divergent interests, as a counter to the rich nations' club. India, for instance, has little to gain from aligning with the Cairns group countries like Brazil because it's hardly a farm exporter. But the group this time found staunch allies in India and China. And the G-23 is still on track to make gains in two areas. Rich nations have agreed to fully open up their textile markets by 2004-end. And the WTO has agreed to finalise a deal to allow exports of generic drugs from poor countries for emergencies like aids within the next six months. But the generics agreement still has several restrictions.

Says Mattoo: "Cancun is a semi-colon, not a full stop. India must act quickly to shape its post-Cancun agenda as it has a bigger stake in a multilateral trading system. For instance, it must carefully assess its farm strategy: what concerns prevent its overall comparative advantage in agriculture from translating into a more aggressive negotiating position?" Merely basking in celebration could encourage protectionist tendencies and, as Panagriya says, weaken "the ability of leaders to sell liberalisation at home". Because, like it or not, protection in poor nations is still higher than in rich ones.