Can We Survive The Plague?

Though the establishment was quick to react, doubts remain on our preparedness 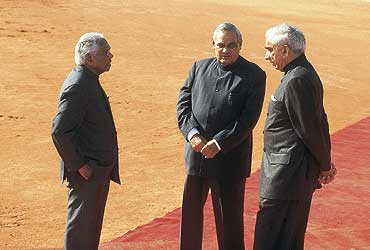 outlookindia.com
-0001-11-30T00:00:00+0553
The enormity and scale of the terrorist attacks in the US has led to apprehensions of a similar operation being carried out by terrorist outfits in India. While the security establishment has been quick to follow up with knee-jerk drills—mounting heightened surveillance at important airports by deploying Quick Reaction Teams, beefing up security in sensitive government installations and tightening up the intelligence grid—the fear of a daring and an unconventional attack has become real.

Can Rashtrapati Bhavan, Parliament and 7, Race Course Road be potential targets? Are our security systems in place to pre-empt such an attack in major metropolitan cities? What is the state of preparedness? These are disturbing questions which are now being addressed by the country's security and intelligence agencies.

As terrorist organisations constantly endeavour to upgrade their operational strategies and manoeuvres, security agencies at home, unfortunately, seem to be groping in the dark. "We're always reactive rather than proactive in our approach," concedes a senior home ministry official. "There is always a human angle to these terrorist attacks. If one person fails in detecting a lapse, aspersions are cast on the entire system," says Veeranna Aivalli, commissioner of security, civil aviation. "And that is unfair," he adds. The Bureau for Civil Aviation Safety, responsible for the protection of flights, aircraft and airports, has tightened up its arrangements as a follow-up to Tuesday's carnage.

Senior South and North Block officials, especially those associated with internal security, however, firmly believe that no security outfit in the world could have visualised a scenario of passenger airplanes being used as objects of attack. Says an official: "Now that it has happened, we'll have to decide on measures on how best to prevent such rare occurrences." The fact that the four passenger airlines used in the US attack escaped radar detection because they flew at low heights and did not follow a scheduled flight path is also cause for worry.

"If this step can be adopted, there are a number of possibilities for terrorists. Tactics which may now only be in the realm of imagination and fiction," argues R.S. Gupta, special commissioner of security and operations in Delhi. By his reckoning, if anti-hijacking measures are gone through with a fine-tooth comb and methods continuously employed to review and improve the system, such an eventuality is remote. Says Gupta: "The basics are important."

On the ground, many agencies including the police, IB and the raw believe that the security system is in place to tackle such contingencies. "We have faced a variety of terrorist situations in the past 20 years, starting from Punjab to the Northeast and now Kashmir," says Amod Kanth, the Delhi Police joint commissioner, credited with arresting the perpetrators of the transistor bomb blasts which hit the Capital in the late 1980s. Says Kanth: "We've gone through this trial by fire for many years. The US has not. Maybe, it will now."

As a first step to deal with similar crises—a terrorist attack or a major fire—a disaster management group was set up three months ago. While the security apparatus may be equipped to battle and also contain militancy, there is precious little it can do in the event of a kamikaze attack. Important landmarks in the Capital such as Parliament and the PM's house are designated no-fly zones. But should a passenger airline be hijacked from Palam (four minutes of flying time to the heart of the Indian government) for a suicide mission, the response time of the Indian Air Force would lag sadly behind.

The nearest fighter base in Hindon, Ghaziabad, has been declared unsafe for operational reasons since 1996 because of increasing bird hits.

As things stand now, in the event of an emergency in Delhi, where the services of the air force would have to be requisitioned, security officials have to fall back on the air base in Ambala, Haryana, some 200 km away. "If Hindon is re-established as a base, it would take just three minutes to disable a rogue aircraft which strays into our airspace as opposed to 20 minutes from Ambala," says a senior airforce officer.

Intelligence officials maintain that emergency measures are well in place during important functions like the Independence and the Republic Day. "First of all, the entire area is sanitised using sophisticated gadgetry and then fighter cover is provided with anti-aircraft guns," says an intelligence official. Taking a cue from the assassination of Egyptian premier Anwar Sadat, turrets deployed on tanks and other weapons point ahead and not towards the podium. Police officials also point out that alternative exit and entry points are demarcated and safehouses earmarked for vips, should a terrorist attack occur on such a motorcade. "There is a standard drill to deal with such situations. Depending on where the PM or President are, we have chosen safehouses," says a security official.

A host of Indian companies with major operations on the nation's west coast have expressed safety concerns in the event of any attack from Pakistan. "Jamnagar, Hazira, Bombay High and ports like Kandla, Pipavav and Vadinar form India's economic backbone," says defence analyst Indranil Banerjee, adding: "The alertness level needs to be at the highest on the west coast."

Industry sources claim security is of major concern since Jamnagar has important army, navy and air force bases. The defence ministry has already advised companies like Reliance, Essar, ongc, l&t and gail to use non-reflecting paints, like the army, to camouflage their storage facilities and refinery structures. "This followed intelligence reports of Islamabad's intentions to target India's economic zone in the event of a war," says commander R. Bakshi, a senior analyst at the Institute of Defence Studies and Strategic Analyses.

On their part, companies in the region have been in touch with the defence authorities and making alternative arrangements in case of an emergency. For instance, oil companies having crude import facilities in the Kutch region are thinking of forming a joint forum which will take care of both security and environment issues. Some of the companies have already sent their experts to the Gulf of Valdez in Alaska for first-hand training in the event of an emergency.

That it has taken almost 14 years to review and upgrade our contingency plan to meet any attack is a stark indication of how much importance the security establishment places on this vital aspect of the country's defence. Top security officials, who met in the Capital last week, following the US attacks, feel that the contingency plan is "outdated and weak". "Instead of issuing advisories to state governments, we've to envisage a plan to meet all types of emergency situations," says an intelligence official. The attacks in the US have jolted the country's security apparatus. And much more needs to be done to meet the challenges of terrorism in the new millennium.

A Quieter Winter Ahead?