Can They Be Tried For War Crimes?

They ought to be, considering there are enough incriminating instances. But they won't be, because they are the US and UK. Updates 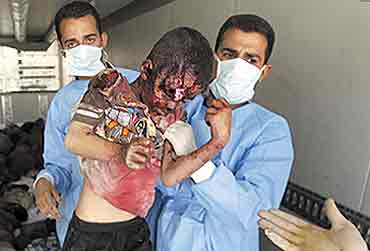 outlookindia.com
-0001-11-30T00:00:00+0553
Sky News correspondent Jeff Reed rose after one of those military briefings in Doha to ask: "Can I ask the daily weapons of mass destruction question? They haven't been deployed. They haven't been discovered. Is this war going to make history by being ended before you've found its cause?" After a significant pause, Maj Gen Victor Renuart replied, "That's a great question. We continue to look at sites around the country." That was two weeks ago.

That question is asked again by the enduring image of the war—the 12-year-old boy Ali Ismail Abbas who lost both his arms, and both his parents, to a US bomb. If Renuart still can't answer Reed's question, why did Ali lose his arms? If the wmds are found, questions would still arise over the bombing of civilians—mostly children—because 60 per cent of Iraq's 24 million are children.

If not, the very act of war would be illegal, and Saddam's reign of brutality glossed by his one truth: that Iraq possessed no wmd. Saddam was as bad a guy as one can get, but there is no law—national or international—that sanctions attacks on guys because you have good reason to believe they are bad, and could threaten you (see infographic).

Of all the reasons offered for the war, the favourite was that Iraq must disarm itself of wmds. Resolution 1441 warned of "serious consequences" if it did not. In his argument to justify the war, British attorney-general Lord Goldsmith pointed out that the resolution recalled earlier resolutions, one of which spoke of using "all necessary means"—diplomatese for war. He said 1441 required the Security Council only to 'consider' the UN inspectors' report, implying that approval by vote wasn't needed. But most countries were not convinced: waging war because Saddam was not seen as disarming fast enough seemed a response far out of proportion to the suspected possession of wmd.

Says V.S. Mani of jnu, "In the name of wmds we were shown four badly covered drums filled with chemicals. If those are the much-vaunted chemical weapons, someone has to answer why so many people have been slaughtered. None of the US justifications for waging war against Iraq can stand scrutiny. To say that Iraq needs to be liberated by the Anglo-Saxons is like saying that divine intervention is required to uplift those not blessed by it." Asks Justice (retd) P.B. Sawant, "Shouldn't the dismantling of wmds begin with the US and its allies? What has happened in Iraq is nothing but pure genocide, and there is a strong case for instituting war crimes against Americans."

The doubtful legal case for the war was backed by claims from "intelligence sources"—far too many of which have been established to have been false—that Saddam had "gassed thousands of his own people" at Halabja in March 1988.

But Stephen C. Pelletiere, the cia's senior political analyst during the Iran-Iraq war, has a rather different story about Halabja, and he should know. For, as Pelletiere wrote in The New York Times in January, he "headed a 1991 army investigation into how the Iraqis would fight a war against the United States; the classified version of the report went into great detail on the Halabja affair".

The gassing at Halabja occurred during a battle between Iranians and Iraqis towards the end of an eight-year war (1980-88), he wrote. "Immediately after the battle the United States Defence Intelligence Agency investigated and produced a classified report.... That study asserted that it was Iranian gas that killed the Kurds, not Iraqi gas." The Iraqis did use gas to hit back at the Iranians, but it was not the killer gas, those reports say.

The condition of the Kurds' bodies indicated they had been killed with "a blood agent—that is, a cyanide-based gas—which Iran was known to use", writes Pelletiere. Iraqis "are not known to have possessed blood agents at the time". They did use mustard gas, against international conventions, but claimed they destroyed its stock soon after the war with Iran. There have been no accusations since Halabja that the Iraqis used killer gas. UN inspectors did not find any, but UK and US leaders insist they exist. "They will be found," says British defence secretary Geoff Hoon, whose certitude makes many believe wmds might now be planted.

None, in any case, were used against the Anglo-American forces. Between the two sides, it's the Americans and the British—and not the Iraqis—who have used weapons that approach wmd in this war.

For instance, the US used cluster bombs around Hillah. These tore many civilians to shreds; and the Americans knew they would. The bombs contain lethal shrapnel and cause air blast injuries to internal organs. The US had suspended supply of warplanes to Israel after it used cluster bombs in Beirut in 1982. Now Hoon justified their use on the ground that they would make Iraq "safer for our armed forces". Hoon also declared that the parents of children who were killed in the bombing would one day thank the British and the Americans for liberating Iraq.

Amnesty International has opposed the use of cluster bombs because they cause indiscriminate deaths, the principle on which chemical and biological weapons are opposed. Cluster bombs explode in the air just above ground level. "Each cluster bomb contains at least 200 'bomblets' that not only kill when they are dropped but continue to kill people for a long time afterwards," says Amnesty's Kate Allen. About 20 per cent of these do not explode on impact, and they remain hidden and dangerous for a long time. More than 1,600 civilians died from cluster bombs over years after the 1991 Gulf War, Allen said. In Serbia, they continue to kill people four years after the 1999 bombing. "We have marked 14 locations with unexploded cluster bombs," says Petar Mihajlovic from the Centre for Ordnance Dismantling and Demining in Belgrade.

The Anglo-American forces have also admitted to the use of depleted uranium (DU) in shells fired at tanks and concrete bunkers. DU gives the shells a hard coating to penetrate heavy metal and concrete. "DU is almost certainly an illegal weapon under a variety of international agreements including the Geneva conventions," Ian Willmore of the Friends of the Earth told Outlook. "It sets off radiation, and the consequences are worse when used in large cities or in confined space."

Hank van der Keur from the Laka Foundation in Amsterdam, who has researched weapons using DU for more than 10 years, told Outlook that "the danger is that when these weapons hit their targets, microscopic particles are released, and people breathe these. Many soldiers who fought in the last Gulf War are reported to have fallen ill because they handled DU, but these reports have not been fully investigated". An investigation by the Serbian health ministry found no immediate abnormalities in people living in areas where DU was used, but its report says "we found some chromosome abnormalities that are developing". There are signs that this is a slow-working poison and the real effects will take time to surface.

Civilians did not just die in collateral damage. A Sunday Times reporter travelling with US forces reported marines deliberately picking civilians and shooting them on the way to Baghdad.There's also a French TV footage of a US tank shooting into Hotel Palestine, unprovoked. The Al Jazeera office had been bombed in Afghanistan, it was now bombed in Baghdad. These were deliberate acts, not just stray missiles that hit the Al-Shula and Shaab marketplaces.

It is an elementary requirement of the Geneva conventions that civilians not be attacked. It didn't stop the Americans from bombing a restaurant in Mansur after 'intelligence' reports that Saddam might be dining there. Fourteen people were killed; Saddam was not among them. And the US response? We murdered the wrong guys, sorry.

Under the Geneva conventions, occupying armies have a duty to protect people and property under their control. Through days of looting, there has been little protection for people, for life-saving property like hospitals, for historical property like museums or public property like libraries. The coalition forces, however, had no problem protecting Iraq's 600 oil wells.

Many objects stolen from archaeological sites in the first Gulf War surfaced in the international markets. This time plunderers took away or destroyed thousands of invaluable treasures dating from up to 5000 bce. From Baghdad's National Museum alone, some 170,000 objects were stolen or destroyed. This violates the Hague Convention. And though the US and UK have not signed it, experts say the convention codifies principles of the Geneva conventions.

German archaeologist Michael Petzet, president of the International Council on Monuments and Sites, accuses the US military authorities of committing "a crime against humanity" by ignoring warnings about the looting. "The US army was informed about the risks of looting long before the war began and could have prevented it," Petzet says.

The guilty need to be punished for violating many international agreements, but "where is the jurisdiction to bring the guilty to book," asks former judge Hosbet Suresh. "In the Nuremberg trials, Nazis were captured and produced before the war crimes tribunal. It's not possible to deal with top-ranking US officials similarly."

Indeed, any suggestion that it's Bush and Blair who should be tried for war crimes and not Saddam appears silly only because that would be a plea of the powerless, and not because the facts are doubtful, or the argument feeble. Justice has a way of riding with the winner.