Foreign cultural centres are offering films, food, concerts and more to the culturati 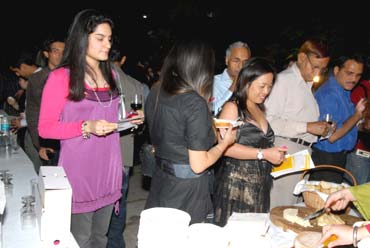 As our palates get more adventurous, our tastes run towards cultural exotica and our passports fill up with seals in a Babel of scripts, so too do the foreign cultural centres escalate their activities in a bid to woo India's brave new middle class.

Turn to the listings page in any magazine and you'll see Japanese drums, Norwegian jazz, German string quartets, Spanish flamenco, Italian opera stars, Turkish dervishes and Chinese acrobats jostling for attention, along with more indigenous cultural offerings. Neither do those bemoaning the dull fare at multiplexes have an excuse any longer: in the coming weeks alone, there is to be an Austro-Hungarian film festival and a Serbian film festival, not to mention the regular weekly French and Italian film club screenings.

Says Pavan K. Varma, director general, ICCR, "With the perceived sense of India being a growing global power, foreign cultural centres are enhancing the pace of their activities correspondingly." Their level of activity also depends on their means and part of the draw is having your own premises, better still with a cafe. While some like Italy, France and Iran have their spaces, others rely on the capital's cultural limbs like the India International Centre and the India Habitat Centre to make their presence felt.

The newest kid on the block and the most promising is the Japan Foundation. With a bigger staff and a brand-new property, it has revved up its activities in honour of '07 being the India-Japan Friendship year. Barely a year old, its premises are equipped with a well-stocked library, free Japanese language teacher training classes and a performance hall that's never quite adequate for audiences eager to explore the esoteric charms of ikebana or 'sit-down comedy'. But it's not a space they confine themselves to—the National School of Drama and the National Gallery of Modern Art are two prestigious venues where they often hold their events.

Concerts by Japanese pop stars, Noh theatre performances, feasts of delicacies like tofu and yuba, tea ceremony demonstrations, haiku writing workshops and exhibitions of contemporary art—they've consistently been chalking up about six events every month since they first got started, all running to packed audiences. Comments its affable director, Nao Endo, "Our prime minister visited in August and since then, many other important ministers have followed suit. With its economic growth in the last five years, India is very hot in Japan!" 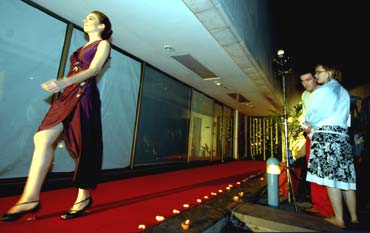 Leading the pack, though, is the Alliance Francaise network which, working closely with the French embassy, boasts a whopping 700 artistic events every year. "French people are really into India," says Benedicte Alliot, cultural attache, French embassy. This makes the task of getting top French performers to India much easier, she adds.

The airy, sunlit Alliance Francaise on Lodi Estate, where the Golden Jubilee celebrations are currently in full swing, has become a prime meeting place for Delhi's young intellectuals. Students mill about shuttling between practising French conjugations and taking breaks to refuel on rajma-rice and milkshakes at the canteen (where, alas, the legendary French cuisine is conspicuous by its absence), conversing all the while in determined French.

About 5,000 students are enrolled at Alliance Delhi—and the French government would like to lure them to its shores for further studies. "There are 16,000 Chinese students in France, but only 1,400 Indians," says Alain Rechner, director. "We'd like more people to know that France is not just about the Eiffel Tower, it also has the fastest train in the world and long experience with nuclear power. That it's not just a place for culture; it's also a place for high technology and higher education."

Further education is certainly top of the agenda at the British Council. Its fabulously stocked library—with a treasure trove of 30,000 books and some 3,000 dvds—continues to be the main attraction, drawing hordes of college students, parents with little children and even the occasional pujari researching ayurvedic herbs. However, with an increasing number of young Indians hoping to pursue their studies in the UK, the solicitous team behind the English language learning counter is even more in demand. After deftly tackling the queries of an anxious parent and a government school product hoping to study abroad, one of the counsellors informs me that the British Council administers up to 16,000 examinations annually, which aspiring students need to clear to get into specialised programmes in UK universities.

It's examinations of an entirely different kind that go on at the American Center, where you're thoroughly frisked, made to surrender all electronic gadgets and prove your person to be free of "unopened local mail". The library—despite its good stock of microfiles and periodicals—is ill frequented, except for little old men watching National Geographic on mute or patiently typing out long mails, one finger at a time.

So far as the cultural fare goes, there's nothing but the weekly reading by a local "poet laureate/in residence", and screenings of movies even HBO has stopped showing. There's an occasional splashy event such as famed jazz pianist Herbie Hancock's concert earlier this year—for which hundreds of people were turned away due to over-issued invitations and far too many reserved vip seats. As an observer of Delhi's cultural life over the past 30 years puts it, "It's just one kind of event from the Americans and then silence for a long time. In the old days, they showed old Hollywood classics, they had talks and concerts, the most memorable of which was Duke Ellington's in 1963. It used to be a pleasant place and the library was used much more." 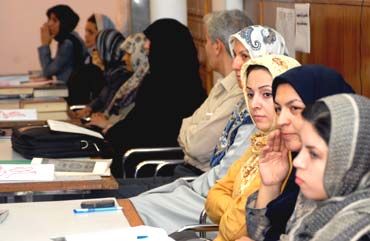 In Iran Culture House, though, the library is where all the action is. At its long table, Quranic scholars and researchers of historical manuscripts rub shoulders with lovers of Rumi, Khayyam and Haafiz, who've signed up for the free three-month Farsi language certificate course to be able to read in the original the verses that lose some of their poetry in translation. They will also be first in line to enrol themselves in the Persian calligraphy classes, or even the current affairs symposiums on subjects such as the freedom of religion in war-torn societies, which they periodically organise.

Those who can't bear to wait for Iran Culture Week to come round again at the India Habitat Centre would do well to consult Mateen Akhlaq Naqvi at the audiovisual section, for access to the finest of Iranian cinema. "Persian movies are great movies, great movies!" he exclaims passionately. "If you see Children of Heaven, I don't think you will see it less than five times! You cannot imagine a film like that could be made on such a little topic, a pair of lost shoes!"

Another hub for movie buffs is the Italian Cultural Centre, at the embassy premises in Chanakyapuri It's not just a glimpse of Monica Bellucci onscreen that drives people out to this quarter, it's also the great cappuccino, pasta and wine you get in the cafe, where the food is catered by Diva, the Delhi glitterati's go-to for Italian cuisine. The wine-and-cheese and olive oil tasting evenings regularly hosted at the centre also draw the page-three crowd regularly to their parties.

Refreshment, though of the more intoxicating kind, was what made the old Soviet Centre of Science and Culture all the rage many years ago. Its little cafe served beer, a pleasure that wasn't to be had anywhere else. Now, at the sadly diminished Russian Cultural Centre, kids and their minders have taken the place of the soaks: the institute offers ballet classes, painting and opera lessons, a chess academy, apart from weekly film screenings and the occasional cliched lecture on Indo-Russian friendship.

Remarks Patricia Raveggi, director of the Italian Cultural Centre, "Ten years ago, there weren't so many cultural events in Delhi. The few things that took place had great success and a great audience. Now, you really have to compete for a place in the sun!" The increasing perception that cultural relationships are more enduring and worth investing in than political ones is best summed up by Majid Ahmady, public relations officer of the Iran Culture House. "Cultural relation is like a walnut tree: layer upon layer built up over a long time and as strong as any wood can be. But political relation is like a banana tree. In a year, it can grow very high and be cut down in the next!"