The Muslim community in the relief camps looks for some signs of hope. There's none in sight. 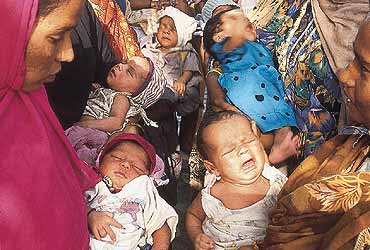 outlookindia.com
-0001-11-30T00:00:00+0553
More than a month after the worst ever anti-minority inferno erupted in Gujarat, at least 1.09 lakh Muslims are huddled in makeshift shelters set up by their community. Too terrified to venture out, they are now—even by the PM’s admission—refugees in their own country. The official figures now—and most NGOs, social workers put the unofficial one at upwards of 2.5 lakh—is higher than the total number of refugees in Sudan displaced by civil war and aerial bombings in 2000. The UNHCR had pegged that figure at one lakh.

With the violence in Gujarat showing no signs of ending, the flood of families to relief camps continues. Indeed, as a barometer of normalcy in the state, the influx of families to the shelters mocks chief minister Narendra Modi’s claim that the carnage is under control. Over the last fortnight, when the worst was believed to be over (major incidents of violence continued to rock the suburbs), the number of people living in relief camps in Ahmedabad almost doubled to reach 70,000. These are official figures. Unofficial estimates have it that at least one lakh people have been displaced in Ahmedabad and more than 2.5 lakh throughout the state.

The few who have tried to go back to their homes in recent days have been forced to return to the relief camps. Ahmedabad collector K. Srinivas admits that at least 5,000 Muslims who tried to leave the camps returned because "conditions outside were not conducive". In some areas like Odhav, even relief camps have been targeted by mobs. In the rural belt, the story is the same. "Forget about leaving the camps. There are large numbers of new entrants every day," says Sanjay Vincent, a social worker keeping tabs on relief work in the districts of Anand and Kheda.

"How can I go back and live among the people who did this?", asks 20-year-old Shaheen, from Panchmahals district where Godhra is located. She survived a brutal gang rape on March 2. A resident of Randikhpur village, Shaheen fled the area when it was attacked by mobs the day after the Sabarmati Express massacre. A group of around 17 people had left the village together, in search of shelter elsewhere. But three days later, they were waylaid by mobs from their own village who had tracked them down in Chhaparwad. She is now staying at the Godhra relief camp.

But the most chilling accounts of the carnage come from young children in the camps. When asked about the traumatic events, toddlers as young as three lisp, "goli mar diya". Six-year-old Ramzane Abdul Rauf, who escaped from Naroda Patia, recounts in a deadpan tone, "There was a big mob shooting bullets. I was hiding under my bed. They started burning my house and I ran out. My father found me." Some like 12-year-old Aslam Khan have seen people being killed in front of their eyes. "I was at my father’s cycle repair shop when people started throwing stones. My neighbour was killed by a police bullet. I run when I see the police. What if they shoot me?" he asks fearfully.

The Modi government’s attitude towards riot victims is evident from the fact that of the 101 relief camps for Muslims in Gujarat, not one has been set up by the state. Says C.K. Koshy, state revenue secretary: "All the camps are run by the Muslim community assisted by NGOs. We are providing all the supplementary services—water, sanitation, medical support, rations and an allowance of Rs 5 per head." Even in earlier riots and after the Bhuj earthquake, he rationalises, relief work was led by communities and NGOs.

It is clear that government support is falling far short of requirements although relief was rushed in prior to the prime minister’s visit. Says Munafbhai Memon, one of the organisers of the Shah Alam camp: "The government rations account for just 40 per cent of the food supply. We are running the camp on donations from the community." And there are just a few toilets provided in each camp. Unable to maintain basic hygiene, the inmates are now being stalked by gastroenteritis, malaria and cholera.

And then there are the camps which have not been recognised. "There are at least 100 such camps in the state which are not deemed eligible for government support," alleges Father Cedric Prakash, from Citizens Initiative, an umbrella organisation of 30 NGOs. Camp organisers point out that the police are not visiting the camps to register FIRs from the inmates who are too scared to leave and report to the police. Even worse, there are allegations that the government is making a serious effort to dismantle the shelters. On April 1, the Gujarat High Court admitted a petition filed by the Gujarat Chand Committee, an NGO, demanding that the government not be allowed to do so.

As the carnage continues in Gujarat, the relief camps present a dismal picture. The inmates are as fearful of returning to life outside the camp as they were when the pogrom began. The condition of the riot-affected people outside the camps is not much better. The thousands who have not been able to return to work since the riots began are living in penury. With the riots flaring up again this week, their future remains bleak.

'Obedience Pushes You To Fascism'